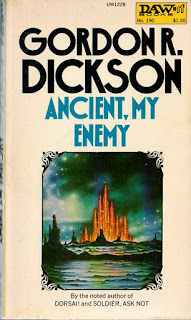 I like short stories. Some people don't, preferring to only read big, thick books that they can get lost inside of for hours at a time (as described in this old Howard Andrew Jones post). While I'm willing to go all in for big books on occasion (I still need to get a copy of R. Scott Bakker's The

In the past two weeks, I reviewed twenty-one stories in my two-part Summer Roundup at Black Gate. That's a great big fat anthology worth of stories, and I absolutely loved it. It didn't matter that while some were quite good, while other swere only eh. What mattered was instead of being locked into a single narrative, I was treated to nearly two dozen. 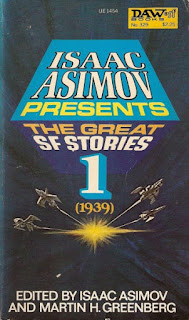 From my earliest days reading fantasy and science fiction, I've been a reader of short stories. The infamous boxes in my old attic hold scads of anthologies and collections, such as The Great Science Fiction Stories Volume 1, 1939, Flashing Swords!, Ancient, My Enemy, etc. My dad kept bringing new ones home all the time, and I kept reading them.

Unlike a novel, they only required a commitment of less than an hour. Even back in my youth, when many fantasy and sci-fi novels barely broke 200 pages, it took me a couple of days to finish them. I could sneak another story in between finishing homework and going to bed. 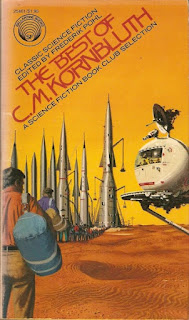 Some great ideas can't support a great, big story. Twenty or thirty pages, though, are perfect. Henry Kuttner's "Mimsy Were the Borogoves" is a perfect story. Same with Cyril Kornbluth's "The Little Black Bag." Would either benefit from being expanded to novel length? More importantly, could either bear the weight of more words? "The Cold Equations" exists solely to make a specific point. Godwin didn't need to take time detailing the sickness killing the colonists, or even the nature of the colonists itself.

It's also "easier" to maintain a single mood or theme over only thirty pages than several hundred. Glen Cook's "Filed Teeth," and Karl Edward Wagner's "Lynortis Reprise" are doom-heralding bolts of S&S. Steven Erikson's Gardens of the Moon has moments like them, but then surrounds them with hundreds of pages of side plots and world-building. In and of themselves, those things aren't bad. When I want fast or scary, though, they're roadblocks to the next sequence. 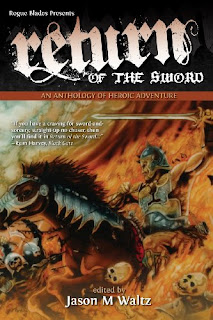 This isn't to denigrate novels or even lengthy series. My copy of R. Scott Bakker's The Great Ordeal should be waiting for me when I get home from work today. The thing is, by the time I finish that, I'll probably have read at a dozen or more stories, each one unique and standalone.

The last thing I want to say about short stories, is they expose me to tons of new writers. I only knew a handful of the writers I reviewed for the Summer Roundup. Now, I have a stack of new names to look for in the future. Even if you're not a big fan of shorts, they give you a test drive of an author's work before wading into some great big novel. For me, Adrian Tchaikovsky springs to mind.  If I pick up his novels, it'll be because I really liked a story of his in Grimdark Magazine. It's the reason I've read books by James Enge and Howard Andrew Jones: I read and dug their short stories. 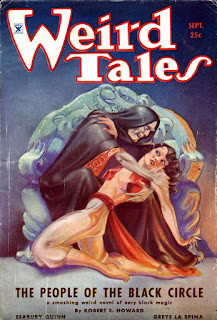 Short stories used to be the lifeblood of fantasy and science fiction. It was on the pages of Weird Tales and Astounding that the genres as we know them were birthed and matured. Swords & sorcery in particular, flourished and, still, works best as short stories. My experience with novel-length S&S is that the slow bits (you know, the stuff that gives novels their weight and depth), detract from what I want. What I want is rousing action, exotic locations, and dark atmosphere and horror. The Hour of the Dragon is alright, but for me, it doesn't measure up to "Red Nails" or "Queen of the Black Coast." Same thing with Kane. Bloodstone is not equivalent to "Reflections for the Winter of My Soul." The stories are tighter and more dynamic, which is what I want from heroic fantasy. 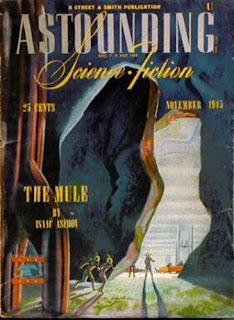 If you only read big, thick books you can "lose yourself in," don't let that dissuade you from checking out short stories at Heroic Fantasy Quarterly of Swords and Sorcery Magazine. Give them a chance and you will be treated to high and low adventure, trips to a host of different worlds, and tales of derring-do by a wide variety of heroes, rogues, and villains. Check out the MAGAZINES list over to the right of this article for a list of others, including several science fiction ones as well.

There must be something in the air, as, while I started this, Jeffro over at the Castalia House blog posted about his love of short stories. Just the day before, Alex wrote one about writing them. Alongside the old hands (HFQ, SSM, etc.) and all the new and recent magazines (Grimdark, Cirsova, Skelos, etc.), there are lots of venues with diverse attitudes about heroic fantasy and related genres for you to choose from, so dive on in.
Posted by The Wasp at 3:55 PM