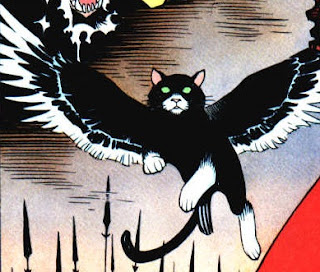 I probably read more Moorcock when I was a teenager than any other writer. I really have no idea how many times I read the various Eternal Champion series. In addition, I read the Dancers at the End of Time series, and various stand alone novels. I particularly liked the Nomads of the Time Stream and their proto-steampunk setting, even if I didn't get all the political, literary, and cultural references. I'm not sure how many books by Moorcock I've read, but I suspect it's around thirty.

I must write, with some sadness, that recent visits to Moorcock's literary landscapes have been a little disappointing. While there's a wild originality to his stories, there's also a sense of playacting that undercuts much of the drama. When Conan growls and swears a mighty oath I buy it. When Elric does the same thing, I don't, and it's because I don't think Moorcock does, let alone can. For all his love of Edgar Rice Burroughs, he's too much of a modern aesthete to really submerge himself in the bloody sinew and gristle of heroic fantasy and let himself go.

While in better hands it wouldn't be a problem, Moorcock seems to have been unwilling to just tell a story. His stories always seem written to make some larger point; humans are destructive and untrustworthy (Corum and The Eternal Champion), the UK's demented and evil (Hawkmoon), and that good and evil are simplistic notions (nearly everything). These are neither deep nor original thoughts, nor does he dig too deeply into them (it's hard to deep thoughts into a slim book when it's already packed with tons of plot). That's not immediately apparent at fifteen, but it is at fifty. There is a thick strand of pedantry that rings too loudly of the waking world, and detracts from the dream world of the story.

Be that as it may, Michael Moorcock's stories still manage to hold a dear place in my heroic fantasy mental landscape. There are few characters more vivid than Elric, Corum, and Dorian Hawkmoon. I still want Jhary-a-Conel's cat, Whiskers, and a friend as loyal as Moonglum. To not read the those three series is to deprive oneself of some of the most original and important writing in heroic fantasy. All those flaws I've found might only be the result of diving into these stories too many times, and becoming too familiar with them, gaining too much insight into the mechanics and the stagecraft. There's so much good stuff in his books that will linger in my mind and outlast any disappointing rereading for a very long time.

Here is a selection of the covers of his books that thrilled me most. Looking at them today, they conjure up not only the stories, but the time when I first read them, discussing them with my friends, and then starting all over and reading them a second and third time. 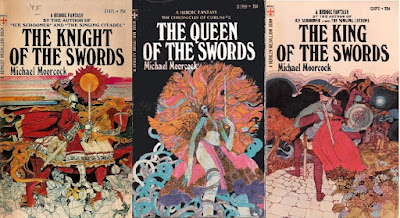 These six covers by American artist David McCall Johnston are my favorite covers of my favorite books by Michael Moorcock. I just plowed through a lengthy and highly disapproving review of the two series over at Ferretbrain. Many of the critic's points mirror my own, but he clearly had much less tolerance for the books' problems.

I like the contrast of an essentially realistic Corum against stylized backgrounds. It's as if the flesh and blood Prince in the Scarlet Robe is entering a dreamscape, where nothing is quite tangible, be it a field of leaves, waves, flame, or dust. As he spends much of the first trilogy in the ever changing realms of Chaos and the second in magical locales,this seems a reasonable interpretation.

I'm struck by the color choices. On each cover, red is what draws the eye, whether it's Corum's crimson robe or Xiombarg's Medusa-like hair. The colors are bold but not bright. As much as they draw your eyes in, they aren't harsh or jarring. Again, they have the soft muzziness of a dream, not the razor-clean edges of a photograph. Definitely not covers you see on today's shelves. 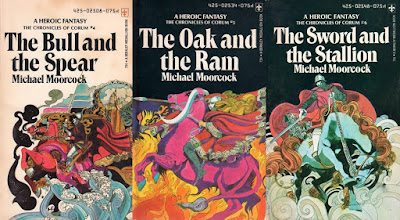 Painted by Richard Clifton-Dey, these covers for the First Chronicles of the Runestaff are weird and bad. They are incredibly realistic, but also incredibly stiff and lifeless. The lizard heads on the last two covers appear drawn from real life, but with the tacked on wings and tentacles, they seem as believable as the poor lizards with glued on fins in Irwin Allen's dinosaur movies. Nonetheless, I dug these books, and still have a fondness for them. Sure, he cranked them out like he was on crank, and wrote them for the money, but they are chock full of madness and gonzo images: war flamingos, imperialists all wearing bejewelled animal mask, a withered emperor kept alive in a crystal womb by super science. Pretty awesome stuff. These are editions I first read and the ones that stuck most deeply (and still do) in my brain.

I haven't included the Michael Whelan Elric covers because I already highlighted them a little bit in past posts. I also discovered I was a lot kinder to Moorcock's books than I am today. It's just one those things, I guess. Tastes and attitudes change and there's not much you can do about it, even in as short a time as two years.
Posted by The Wasp at 8:36 PM 2 comments:

I just meant to put up a batch of my favorite S&S book covers for a quick post, and instead found myself hunting down Frank Frazetta's Conan covers. It's not that there aren't other covers I like and affected me growing up, but I suddenly realized how deeply these helped build my visual interpretation of the genre and decided to focus on them.

Part of me, the overly-intellectual part that channels dime store (really, shouldn't that be dollar store now?) Freudianism, assumes my adolescent self was jazzed by the pictures' blatant power fantasy imagery. There's Conan with a nubile woman curled up, subserviently, at his feet. There he is, teeth exposed in a primal grimace with his arm around Thak's neck and a giant dagger raised up high. With sword and shield held high, he rides through his enemies, trampling them under hoof.

The main part of me, though, says "pshaw!" to all that. I like these covers because they're cool. Yeah, there's a bit of a power trip inherent in Frazetta's artwork. Conan's the biggest, baddest guy around and nothing can stand in his way for long. What's not to like?

And they're darkly gorgeous. You can smell the smoke, gore, and sweat seeping off these covers. These are some of the most viscerally exciting S&S artworks ever done, and I am forever grateful to Frazetta for creating them. 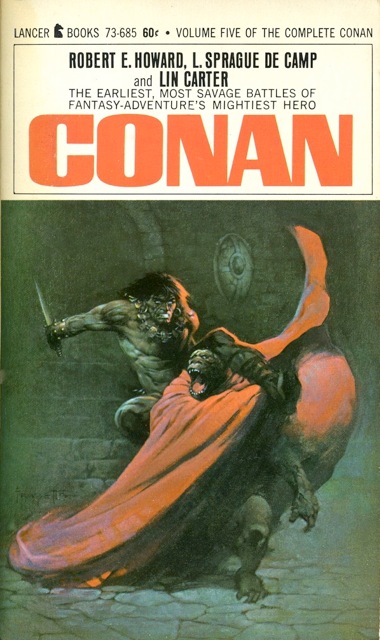 Thak and Conan, Conan and Thak. The young Conan rampaging on rampaging monkey-man. I've always felt bad for Thak. Some priest's dank dungeon shouldn't be his home, he should be running free in the wild, plucking bananas and wooing some monkey-woman. 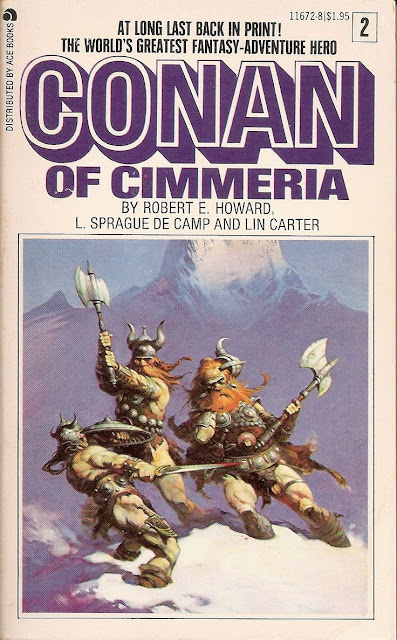 Cool as this is, it always struck me it's too cold for Conan to go around pantsless. I don't demand verisimilitudinous perfection in S&S, far from in fact, but, dang, Conan's never struck me as too stupid to wear dress for the weather. 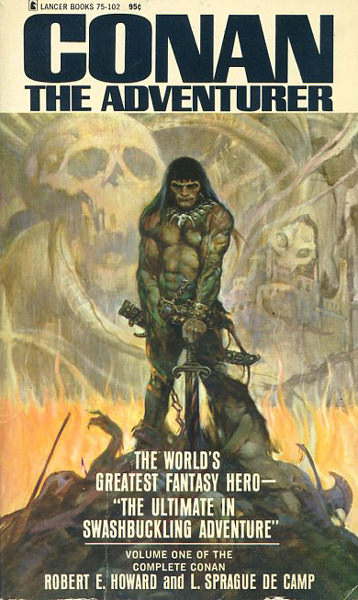 I think this is the most iconic Conan picture ever created. I can almost see his chest and shoulders heaving after just having killed all those creatures he's standing on. The swirling mists and skulls hovering behind over the flames are the forces still arrayed against him, but we know Conan will prevail. 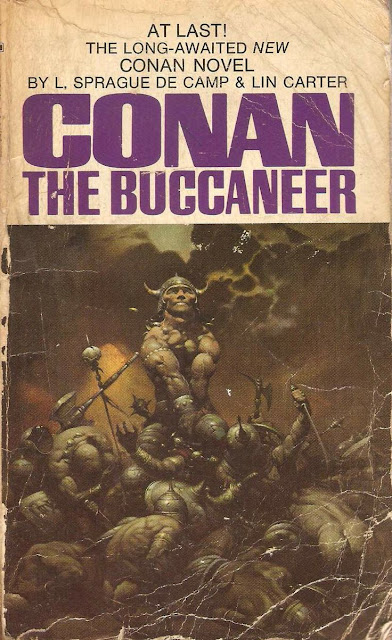 I'm as indifferent to this picture as Conan is to the man he's throttling. That look on his face makes me thinks he's thinking back on his youth, or maybe remembering he's got to pick up milk after work. 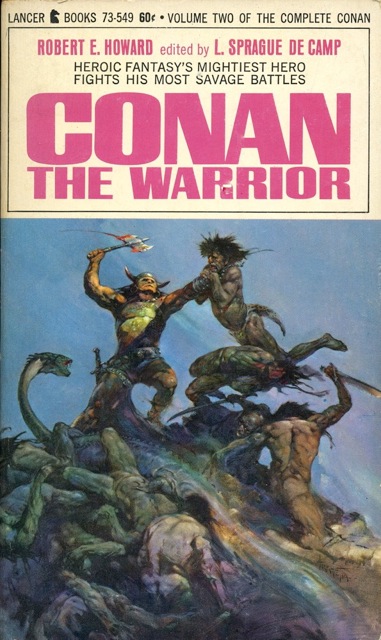 Not the best, but the first one I saw. I first dug this out of one of my dad's legendary book boxes in the attic. I knew the name Conan, but nothing about him. Then I read "Red Nails," and was hooked for life. I assume this for "Beyond the Black River." 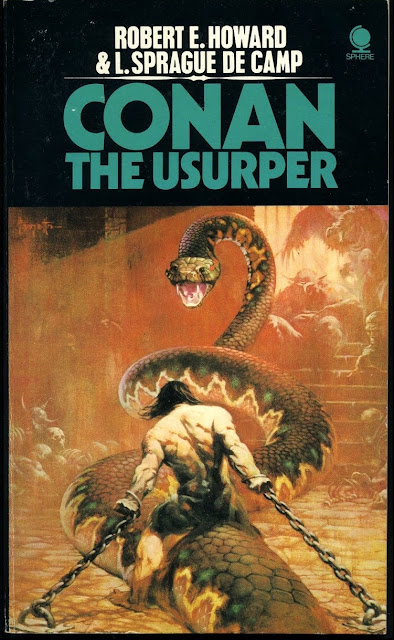 UPDATE: I love this one. We don't see Conan's face, because he's too busy facing off against the world, despite being manacled in place. But seriously, what's with the peanut gallery on the steps? Are they waiting to see who wins, for scraps? What? And that snake. Seriously, it took the time to slither through the Cimmerian's legs instead of just eating him? Seems a little unbelievable, if you ask me. 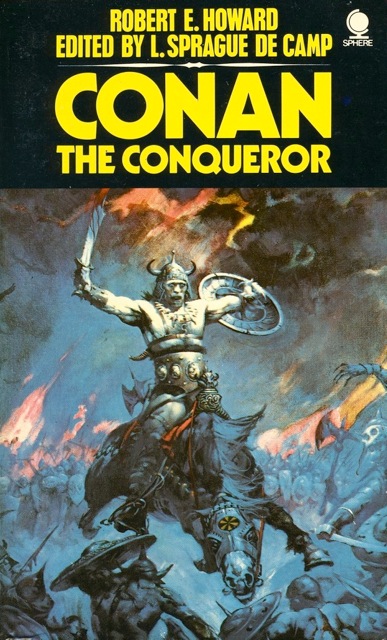 Looking at this picture with a critical eye it kinda stinks. What the heck is that Conan's wearing, a barbarian girdle? And why isn't his chest protected? Whatever. The horse, bucking and screaming as it smashes Conan's opponents is intense. I do really like the band of pink sunlight piercing the blue and black of the shadows. 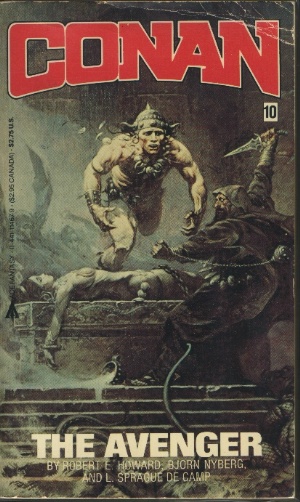 Great cover for a poor book. The picture distills S&S to some of its essential salts: muscled barbarian, evil wizard, slimy, slithering monsters, and nubile damsel in distress. While I love the feeling of movement implied by the swinging censer, and bits of Conan's man-necklace, I also love it's the snapshot effect. Conan's in mid leap, one unseen foot balanced on the altar, his hands prepared to throttle the sorceror. The latter, arm outstretched is ready to swing downward, ripping open his helpless victims. Looking at all these together, this might be my new favorite.

There you go, some of the best and most influential S&S covers. I love that they are so unabashedly violent and masculine. There's no doubt what sorts of stories you're going to find behind those covers. Thank you, Messrs Howard and Frazetta (and De Camp, Carter, and what the heck, Nyberg, too).

The rest of the Ace Conan covers were done by Boris Vallejo. You can look them up on your own, because I don't like them and am not putting them up.
Posted by The Wasp at 8:43 PM 8 comments: