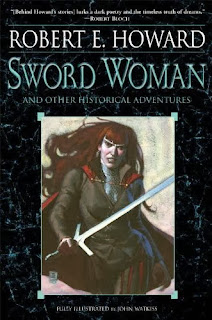 Got this for Christmas from my father-in-law (I did ask for it).  It's got the contents of "The Sowers of the Thunder" and "The Road of Azrael" along with more of Howard's rip snorting historical adventures.  Several stories were bastardized and mutated into Conan tales by Sprague de Camp in order to fill in "gaps" in Conan's timeline.  I'm not even sure those are available anymore.  Here they are in their pristine, Howard-pure versions.
Posted by The Wasp at 1:06 PM No comments:

So here we go.  The trailer looks so much better than my expectations for the movie allow me to believe it to be.  That's based entirely on Peter Jackson's track record of pretty much botching the LOTR movies.  How so you ask?  By making Gandalf look like a high strung fool, Aragorn like a reluctant king, making Elrond runaway, etc. And there's more but why bother?

Like the LOTR movies, this will look gorgeous and mostly spot on.  It's a less complex book than the LOTR so maybe he won't be tempted to "improve" on Tolkien's characters.  He clearly felt the need to up the action and fanboy quotient by portraying all sorts of stuff from the Unfinished Tales and LOTR appendices. Whatever.
Posted by The Wasp at 12:07 AM 2 comments:

As I work on my own piece about the late Karl Edward Wagner and his character, Kane, what comes along in Black Gate but an article about "Dark Crusade".  It's not simply a review but an examination of the why swords and sorcery has been shunted to the sidelines by the doorstopping series that have come to dominate the fantasy market.
I think the author, Brian Murphy, keys in on several good reasons for S & S's displacement in the marketplace.  The commenters bring up several good additional points. 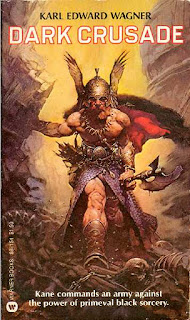 The Kane novels are good and "Dark Crusade" is the best.  However, for the best of Kane get the short stories.  They're all together in "Midnight Sun" from Night Shade Books.  If that's expensive for you you can get the best in "Death Angel's Shadow" and "Night Winds" for a lot less.  And with classic, if not quite accurate, Frazetta covers.
Posted by The Wasp at 11:01 AM 2 comments:

Until recently, I'd never even heard of Adrian Cole.  Then, whilst tooling around the 'net looking for blog material, I came across the man and his bibliography.  I read great things about his Omnaran series (I'm presently in the middle of the first book, "A Place Among the Fallen") and some other things.  And then I saw this: 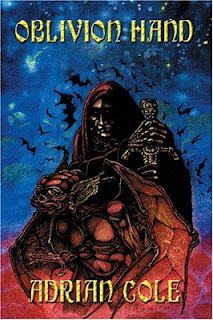 Apparently, Cole had a series of short stories and connected novels going back to the late seventies.  They concern an accursed traveler,  the Voidal, bereft of memory and cast into the darkest reaches of the omniverse for unremembered sins against the dark gods.  Well that got me.
There was also a lot of comparisons to Jack Vance and Michael Moorcock.  That was the final bait.  I ordered my cheap used copy from Amazon and counted the days till its arrival.
Let me start by saying I'm getting a great kick out of "A Place Among the Fallen".  It's got that real basic ur-fantasy thing going on that puts me in mind of "The Fionavar Tapestry" or ""Red Moon and Black Mountain".  It's not swords and sorcery but straight up high fantasy with heroes, mad emperors and gold and white giant owls.  Good stuff.
The Voidal, though, hoo boy. Let me start by saying I don't hate it.  It's just that it's, what can I say, overwrought?   The prose tends to the more violent shades of purple.  In the opening paragraph of "Well Met in Hell", a revised version "The Coming of the Voidal", the first story of the series, the dimension of Phaedrabile is described as being "Beyond natural laws, at the far reaches of reason, shunned by all but the perverse in spirit.  It has many dimensions: they twist and fuse, baffling the mind itself with their deranged patterns, their layer upon layer.  A veritable universe, unique to itself, enclosed, locked."  It only gets more colorful and elaborate from there and not in a great way.

His choice of names isn't much better.  I've only read the first two stories, "Well Met in Hell" and "The Lair of the Spydron" so far but in them we get the wizard Rammazurk, the aforementioned Spydron, Xalganash of the Thousand Teeth, the Arachniderm and Grabulic the Songster.  It's like a cast listing for an episode of "He-Man".  These are just bad sounding names.  I don't even think that's a subjective statement but an objective one.
I laud Cole for his work at creating a non-standard fantasy world in the stories contained in "Oblivion Hand".  Like Vance and Moorcock and Clark Ashton Smith, the tales he's woven are not from the usual bits and pieces of medieval European flotsam that get cobbled together too often. The laws of nature have been superseded by those of magic and monstrous ratlings and demonic Screamers are the normal fauna.
This is the sort of stuff I'm dying to see more of.  I can only take so many blond Nordic barbarians and wily Semitic wizards and clever Latin thieves.  This is the sort of psychotic, lysergic acid swilling craziness I love to find between the covers of a book with such an over-the-top cover as "Oblivion Hand".
And yet.  And yet.  John Clute's "Encyclopedia of Fantasy" dismisses the Voidal sequence as "not serious".  I think that's a harsh and incorrect judgment.  Cole's effort at creating an omniverse that isn't right of the Fantasy 'r' Us shelf is laudable and even a bit exciting.  It's just that the writing is often a barrier to appreciating the stories.  Cole is clearly as in love with words and language as Smith and Vance and seeks to create atmosphere with the use of evocative adjectives.  The problem is he always seems to choose poorly.
Posted by The Wasp at 3:24 PM 1 comment: 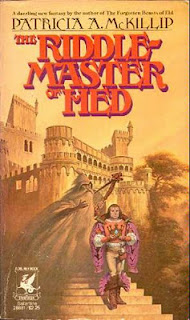 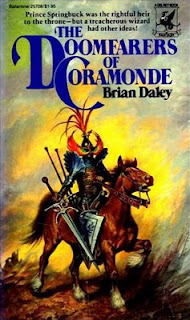 Scanning Black Gate this evening I saw Darrell K. Sweet had died.  Along with the Hildebrandt Bros., Sweet created the image of fantasy for me and doubtless some many other fans from the seventies and early eighties.  His art is beautiful, detailed and evocative of my youth.
Like I wrote about a few weeks ago, a friend of mine would buy books simply because of his covers.  I never went that far but I have no idea how many books with his covers fill the boxes of books in the attic.
Posted by The Wasp at 7:48 PM 2 comments:

Vettius and His Friends

Finished off the very fun and sometimes excellent "Vettius and His Friends" the other night.  All the Vettius and Dama stories are good bits of sword swinging monster slaying fun.  I definitely wish Drake had written a full novel with the pair and taken the time to flesh them out and show us them in action for a long haul.
Other stories included in the collection range from distant troll haunted Scandinavia to the crocodile infested banks of the Nile in ancient Egypt.  There's also the story "Killer" which was later expanded to a full length novel with the help of Karl Edward Wagner.  Unlike the story, the novel is explicitly science fiction.  Both are enjoyable.
I've never been the biggest fan of Drake's novels but his short stories give me a quick, jarring bolt.  From his horror to his fantasy to his science fiction the man's got it down.
Posted by The Wasp at 10:21 AM No comments: