Thongor and the Wizard of Lemuria 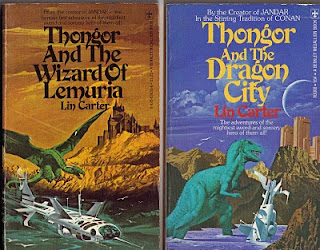 When writing about Swords & Sorcery one is forced to address the extremely problematic figure of Lin Carter. Perhaps no one did more to popularize the genre than Carter. He was a lover all sorts of fantasy writing but S & S seems to have been his greatest paramour.

As an editor he created the "Flashing Swords!" series for Dell between 1973 and 1981. Over the course of five volumes he put stories by Michael Moorcock, Fritz Leiber, Andre Norton, Jack Vance and numerous others. Reread today they contain stories that put the bloody, adrenaline soaked heart of S&S on clear display.

He also created the Swordsmen and Sorcerers' Guild of America (SAGA), a loose association of the leading practitioners of the art in the sixties through the late seventies. At least one anthology dedicated to its members was published. The association created and handed out the Gandalf Award for several years until Carter's health failed in the eighties.

If this is all Carter did for Swords & Sorcery then his reputation would be golden and secure. Unfortunately he was also a writer. Specifically a writer with severe limitations.

Carter cranked out books. In addition to the two dozen or so short story collections he edited he wrote at least fifty novels, often two or three a year. I've only read a few over the years and they've all tended toward the bad. It's few writers who can keep up that sort of output and match it to any degree of quality and Lin Carter didn't.

The other great problem with Carter's writing was caused by the fact that he was an extreme enthusiast about Sword & Sorcery and pulp adventure stories. What he wasn't was a man given to original characters or plots.

The result is that his stories are mostly pastiches (off Burroughs, Howard, Lovecraft, and Robeson in particular). His Lovecraftian stories in particular seem to exist only to string Mythos names together instead of actually striving to generate some sort of actual atmosphere of dread and apprehension.

Which brings me to "Thongor and the Wizard of Lemuria". It was his first published novel (after years of short story writing) and the version I'm reading is one he revised and polished years after its 1965 debut. In a word, it's bad. Ok, two words, very bad.

Thongor is a black maned barbarian from the northlands of Lemuria, ca. 1,000,000 BC. who dashes from one bloody episode to another.
Carter's Lemuria is a mix of Robert E. Howard's Valusia and Edgar Rice Burrough's Barsoom. There's both magic and super science and crazily named monstrous beasts (ex. the dwark). It's all the sort of genre melange that should at least be cause for a few hours of passable fun.

It ain't. I thought I'd blow through the book in a day or two and then polish off at least the second, "Thongor and the Dragon City", over the next two or so days. So far it hasn't happened. For research purposes I will trudge my way though all five Thongor books but I don't look forward to it.

I don't need the best writing from a pulp story but it needs to move. At times the very sentences worked to slow down my reading: "He hurled himself through the jungle at the utmost speed possible, seeking the thickest-grown places wherethrough the jungle dragon might be slowed in seeking to crush passage." That faux-archaic collection of words and diction is typical of the book's writing. The placement and selection of words seems calculated to slow down the reader's brain processes.

There's no noticeable emotion invested in the writing. When you read Howard or Leiber their own opinions come through loudly and clearly. The only thing I can detect here is Carter's desire to write his own stories but an inability to actually come up with anything that wasn't done earlier by someone better.

In the past I've written and talked about developing some sort of site dedicated to Swords & Sorcery and Heroic Fantasy. It's the stuff I grew up reading in my dad's beat up "Flashing Swords" anthologies and Lancer's illegal "Elric" volumes. I have stacks of beat up Lin Carter pastiches alongside my hard sought Charles R. Saunders' originals and love them both. It fills me with nostalgia but it also gets the adrenalin pumping as I'm reading it.

My vision of S & S is pretty expansive and not limited to (though totally including) the adventures of neckless barbarians with double bladed axes in chainmail loincloths. I consider (and I know I'm not being particularly original here) the stories of Clark Ashton Smith and Jack Vance's "Dying Earth" as important to the development of the genre as heavy lifting done by Robert E. Howard in the beginning and later by the likes of Fritz Leiber and Michael Moorcock.

I'm not sure exactly what I'm going to do on this site but if men with thick necks and swords, kidnapped princesses, goateed sorcerers with pointed cowls and lost temples have any appeal, stick around.
Posted by The Wasp at 10:28 AM 1 comment: