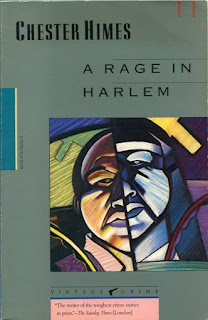 Hank counted the stack of money. It was a lot of money – a hundred and fifty brand new ten-dollar bills. He looked at Jackson through cold yellow eyes.
“You give me fifteen C’s – right?”
He wanted it straight. It was strictly business.
He was a small, dapper man with mottled brown skin and thin straightened hair. He looked like business.
“That’s right,” Jackson said. “Fifteen hundred bucks.”
It was strictly business with Jackson too.
Jackson was a short, black, fat man with purple-red gums and pearly white teeth made for laughing, but Jackson wasn’t laughing. It was too serious for Jackson to be laughing. Jackson was only twenty-eight years old, but it was such serious business that he looked a good ten years older.
“You want me to make you fifteen G’s – right?” Hank kept after him.

In 1957, after having not found literary success despite writing several well-received novels, Chester Himes tried his hand at hardboiled crime fiction. Ultimately, he wrote nine crime stories set in Harlem, eight of which feature the dynamic duo, NYPD detectives Coffin Ed Johnson and Gravedigger Jones. In the first book, A Rage in Harlem, though, they are only secondary characters. The star of this book is Jackson, a deeply naive mortician's assistant trying to rescue his girlfriend Imabelle from a ruthless gang.

His credulity and love of from him the fact that the woman he's pursuing is part of the gang that conned him out of all his money. His complete, and completely unwarranted, devotion to her leads him into acts of criminality totally alien to the good-natured, churchgoing man. Himes' original title for Rage was The Five-Cornered Square, pointing out just how innocent Jackson was. Only the assistance of his twin brother Goldy, a heroin-addicted con artist who dresses as a nun, gives him any chance of success.

The series gets darker and bleaker as it progresses (the final, unfinished, book, Plan B, ended in total race war and Coffin Ed and Gravedigger taking opposite sides). A Rage in Harlem has a much lighter tone. It's a funny book - cynical and packed with random violence - but it's also funny. Much of that comes from black resistance to the arbitrary and capricious power of the white police force. 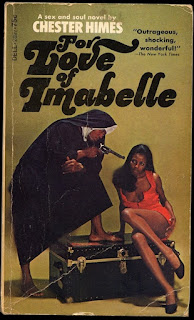 The nag moved off in slow motion, impervious to Jackson’s blows. At that moment the junkman looked from the crowd to see if his property was safe and saw Jackson driving off in his cart. He looked at Jackson as though he didn’t believe it.
“Man, dass my wagon.”
He was an old man dressed in cast-off rags and a horse blanket worn like a shawl. He had a black woolen cloth wrapped about his head like a turban, over which was pulled a floppy, stained hat. Kinky white hair sprouting from beneath the turban joined a kinky white beard, grimy with dirt and stained with tobacco juice, from which peered a wrinkled black face and watery old eyes. His shoes were wrapped in gunny sacks tied with string. He looked like Uncle Tom, down and out in Harlem.
“Hey!” he yelled at Jackson in a high, whining voice. “You stealin’ mah wagon.”
Jackson lashed the nag’s rump, trying to get away. The junkman ran after him in a shuffling gait. Both horse and man moved so slowly it seemed to Jackson as though the whole world had slowed down to a crawl.
“Hey, he stealin’ mah wagon.”
A cop looked around at Jackson.
“Are you stealing this man’s wagon?”
“Nawsuh, dat’s mah pa. He can’t see well.”
The junkman clutched the cop’s sleeve.
“Ah ain’t you pa and Ah sees enough to see that you is stealing my wagon.”
“Pa, you drunk,” Jackson said.
The cop bent down and smelled the junkman’s breath. He drew back quickly, blowing. “Whew.”
“Come on and git in, Pa,” Jackson said, winking at the junkman over the cop’s head.
The junkman knew the code. Jackson was trying to get away and he wasn’t going to be the one to rat on him to a white cop. 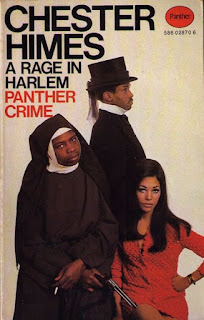 This isn't a mystery, which constant comparisons of Himes to Chandler might have made you think it was. It's a surreal excursion through a mythical Harlem (Himes spent scant time there and wasn't fond of it), filled with larger-than-life characters fighting to survive in the face of poverty and racism, soap opera-level coincidences, and insane violence. Set against Harlem as a Boschean Hellscape, con artists con, thieves steal, and murderers murder.


Looking eastward from the towers of Riverside Church, perched among the university buildings on the high banks of the Hudson River, in a valley far below, waves of gray rooftops distort the perspective like the surface of a sea. Below the surface, in the murky waters of fetid tenements, a city of black people who are convulsed in desperate living, like the voracious churning of millions of hungry cannibal fish. Blind mouths eating their own guts. Stick in a hand and draw back a nub.
That is Harlem.
The farther east it goes, the blacker it gets.
East of Seventh Avenue to the Harlem River is called The Valley. Tenements thick with teeming life spread in dismal squalor. Rats and cockroaches compete with the mangy dogs and cats for the man-gnawed bones. 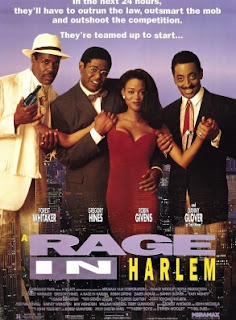 That they happen to star cops and criminals is a concession to economic demands. They are outraged and funny roars from a writer who felt himself forced to leave his home country for France in order to succeed as a writer and escape prospects limited by his race.

In 1991 Bill Duke directed a disappointing version of A Rage in Harlem. While Forrest Whitaker is quite good at conveying Jackson's innocence, Gregory Hines as Goldy (and not making him a transvestite) is awful. Robin Givens is great as Imabelle, but none of it matters. While the film manages to walk an adequate line between thrills and comedy, it never rises to the psychotic heights, or depths, of the book.
Posted by The Wasp at 2:48 PM No comments: