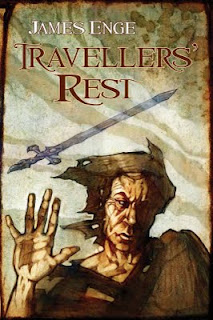 The best thing I've gotten from starting this blog is that I've started discovering the wonders that are the new swords & sorcery revival we're in the midst.  With such magnificent anchors like Black Gate and Heroic Fantasy Quarterly and several small presses we've, as fans, got a whole bunch of new stories to enjoy.
It also means there are all sorts of new writers hammering away out their in the field that I'm only now becoming acquainted with.  Some are the ones I'm reading in "Return of the Sword" and "Swords and Dark Magic".
One such writer I've was tempted to sample is James Enge and his tales of Morlock.  Morlock is a crooked shouldered maker (a sorcerer) with a cursed sword.  He's also the boogeyman of many peoples' betime stories.   Enge's currently luring in new readers with a free e-version of the short story "Travellers' Rest".
A free story is a brilliant way to attract new readers, and I was definitely hooked by it.  Enge chose a great way to introduce new readers to his character and his world.  As soon as I finished the story I plunked down my $1.99 for an e-book of the first Morlock novel, "Blood of Ambrose".  I'm working my way through that and expect to read its two followers later this year.
In researching Enge and his writing (reading some reviews and interviews) the name that comes up the most is that of Jack Vance.  After finishing "Travellers' Rest" I see the reasons for the comparison but Enge seems to stand squarely on his own literary feet.  Like many of Vance's fantasy worlds, Enge's world, or I should say Morlock's, has few of the standard medieval tropes plaguing too much fantasy.  There's a nifty oddness present, much like Vance's Dying Earth tales, but with a characters that generate a little more sympathy than Cugel ever could.  Vance's stories also overflow with the scent of decay and decadence.  Morlock's world is vibrant and pulsing with life (and giant bugs) and not wasting away under the glare of a red sun.
"Travellers' Rest" opens with Morlock and his dwarf apprentice, Wyrth, coming upon a herd of large, bovine insects calmly chewing their cud outside of a worn down, dilapidated town.  Despite Wyrth's misgivings, Morlock stops at the inn called Travellers' Rest.
The innkeeper and his family greet and serve Morlock and Wyrth, their first guests in months.  Our travelers are promptly met with a bit of mystery, buttermilk and a multi-armed swordsman.  In the ensuing battles of swords and wits, Morlock emerges as a man of  quiet competence and courage.  When sets out to discover the nature of his fellow maker, Kyrkylio, and the pall of fear he casts over the region he is a man of steadfast determination.
I won't say more about the plot.  Just go download it and read it for yourself.  The ongoing banter between Wyrth and the laconic Morlock help make this one of the deliberately funnier stories I've read in some time.  Enge's snapshot presentation of Morlock's world is tantalizing and the writing is sharp and witty.  And the escapade I'm not going to write about is exciting, creepy and covered with the right amount of nuttiness.

Note: Because I'm fundamentally lazy this review has taken way longer to complete than I intended.  Since started I've read several other stories and all of "Blood of Ambrose" and they were all great.  Enge's writing and the characters he's created are tremendous additions to the field and you should just go buy them all.
Posted by The Wasp at 3:05 PM No comments: Links to this post

from two weeks in Hawaii.  Never been (though my wife went to second grade on Oahu) and was constantly floored by the absolute beauty of the place, stunning beaches, steep forest covered valleys, inactive and active volcanoes.  And all the while a hankering to reread the original Earthsea books.  Go figure. 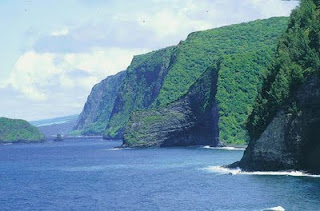 Posted by The Wasp at 4:01 PM No comments: Links to this post