I'm a good piece into Charles Esdaile's The Peninsular War. That's the name given to the complex and ferocious war fought across Spain and Portugal between 1808 and 1814. Spain, suffering from centuries of corruption, political and religious repression, and was facing revolution in its colonies in the Americas, had been forced into an alliance with the French Empire. Together, they had invaded and conquered British-allied Portugal. They had failed to capture the Portuguese royal family and treasury, both of which had been safely evacuated to Brazil.

Despite the battlefield victory, Spain continued to be a state in turmoil. Machinations between various parties led to complete chaos, with followers of the king, Charles IV, facing off against followers of his son, Ferdinand VII.

To ensure Spanish acquiescence to French plans, Napoleon began moving troops commanded by several of his marshals into eastern Spain. In the chaos that followed, King Charles IV abdicated and his son, Ferdinand VII, attempted to assume the throne. Napoleon forced them both out, installed his adoring older brother Joseph on the throne in Madrid and attempted to occupy the whole of the country.

The invasion lead to a massive uprising against the French conquerors. Despite retaliation by the French, the uprising proved impossible to suppress. Spanish regular forces under General Castaños forced the surrender of nearly 18,000 French soldiers at Bailén. This led to British intervention, followed by Napoleon himself taking over the reins of the French forces. Then the British retreated, with their commander, General Moore getting killed, and the French in control of much of Spain and part of Portugal. Napoleon returned to France to raise troops to fight the resurgent Austrians and left his generals in command once again. It was only then that Arthur Wellesley arrived on the scene with a renewed British commitment to fight the French. At that point there were five more years of brutal fighting ahead.

That's as far as I've gotten in the book and it's been packed with examples of military and political incompetence and atrocities of all sorts. Like most guerrillas before them, the Spanish and Portuguese partisans, unable and unwilling to confront the French in the field, carry out murders of collaborators and messengers. Most of the Spanish generals are mildly competent at best and the poor Spanish infantry are often untrained and poorly armed as well as underfed and ill-clothed. The French wantonly sacked and raped their way across the country side. The second, and successful, assault on Zaragoza left 20,000 Spanish soldiers and 34,000 civilians dead after months of siege and weeks of house-to-house fighting.

The British fare no better in the book. Most were Anglican or Methodist and anti-Catholic and had a strong dislike of the Spanish priests and monks, seeing them as lazy parasites living on the largesse of the citizenry. For the Spanish army, they had little regard, treating it with contempt and derision. Without a dedicated supply train, the British army, like the French (and the Spanish, as well), lived off the countryside, routinely plundering whatever farm or village they come upon.

I've never read much Napoleonic history, but I was still taken aback by the murderousness of the war - and this is only in the early stages. It's clear, already, why the fighting came to be called the Spanish Ulcer. It may not have been cause of Napoleon's great defeat - that was the Russian Campaign followed by the battle of Leipzig - but the deployment of so many troops away from his greater objectives was a significant contribution.

Esdaile's book is very clear in his explanations of the assorted factors that led to the war and where it fits into the greater history of Revolutionary and Napoleonic France. What it doesn't do is give long, complicated descriptions of the battles - which in this sort of history, that is one covering a lengthy war - I quite like. Instead of describing the movement of every Spanish and British company at the battle of Talavera, Esdaile concentrates on the French and English strategies that led to the battle being fought in the place it was fought.

I'm going to take a break from The Peninsular War for a few days. I'm going to dive back into Perez-Reverte's The Siege. Then, it's onto War and Peace. It's funny, when I decided on the latter as the follow-up to Doctor Zhivago (more on that later), I didn't consciously pick for its being set during the Napoleonic Wars. It was just synchronicity.
Posted by The Wasp at 1:06 AM 3 comments:

Whiling Away Days in Quarantine

You'd think with all the free time in these days of enforced lockdown I'd get some serious reading done; nope. I mean I am reading and I did actually finish two books - The Footsteps at the Lock and Hidden Moon - but I'm working really hard to finish the three others I've got going on - Doctor Zhivago, The Peninsular War, and The Siege. All are very good and very dense and I will finish them, but, man, oh, man, it's taking me a long time. 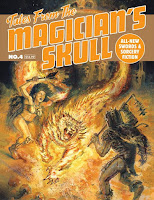 I was excited to get the latest issue of Tales from the Magician's Skull but I can't read it, at least not now. I'm amazed that I still can't read fantasy. It makes sense as it's about all I read for five or six years. Now, I can barely work up any enthusiasm for the genre, no matter how good it looks. It's getting to be a bit of a bummer. I've got books that I really want to read, but when I pick them up any interest just dries up like a puddle in the Sahara at high noon. I couldn't even finish a very good Tim Powers (one of my favorite authors) book I started during all this. I know I'll get back up on that horse someday, but right now it's way beyond the horizon.

We did just watch the Hulu series, Devs, from Alex Garland, starring, among a bunch of other good actors, Nick Offerman. Essentially, a tech mogul is attempting to determine if the universe is completely deterministic. I have all sorts of problems with the way the show discusses the question as if it's never been done before, and the end is not good. Nonetheless, the acting is very, very good, with Offerman and Jin Ha being my favorites. The whole show is, from the woodland campus and gilded quantum computing center to the fog-shrouded hills above San Francisco is beautiful. Within its own universe, it's a tense and riveting show. It's been hinted that Garland wants to do something entirely different with the same cast and I would definitely be up for that.

As for how I'll while away future days in captivity, it'll be more of the same. Some work on the computer followed by computer games and movies with sporadic bouts of reading. The luminous Mrs. V. has us trying to get various projects done and I'm sort of game for it.

Actually, I do sort of have my future reading goals laid out. Once I've finished Zhivago, I'm just going to go for the brass ring and pick up War and Peace. It looked so ridiculously long when I was a kid, but, seriously, when fantasy fans routinely read multi-volume thousand-page-a-book series, it's not much at all. Alongside that, I've got Dark Matter by Michelle Paver, a horror novel set on Svalbard, and Tim Willocks' South African-set Memo from Turner. It's not too lofty a goal, so just maybe I'll achieve it. Stranger things have happened.