I'm going to devote time this summer to actually getting this blog up and running. I think I'll start by focusing on reviews and discussions of what I'm reading. I'll try and zero in on the foundational books and writers I referenced in my initial post. That means Howard, Smith, Leiber, Moorcock and the like.

But I will also continue to sample all the newer stories out there nowadays. There's almost a glut of heroic fantasy out there right now and some of it's pretty amazing. Some of it, well, it's usually better than Lin Carter's stuff.
Posted by The Wasp at 7:23 PM No comments:

Email ThisBlogThis!Share to TwitterShare to FacebookShare to Pinterest
Labels: Swords and Sorcery 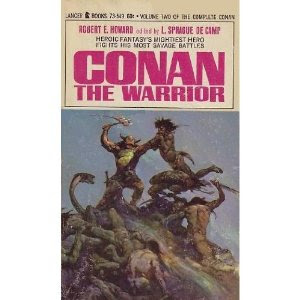 The first Conan stories I read were the three collected in the Lancer Books collection "Conan the Warrior"; "Red Nails", "The Jewels of Gwalhur" and "Beyond the Black River". For my money the first and the last are two of Howard's best stories and still my favorites.

I found the book in one of the numerous boxes of science fiction and fantasy books in my attic when I was thirteen or fourteen. While I'd read the Elric and Hawkmoon stories by Michael Moorcock, most of the fantasy I'd been going through was of the Tolkien and Tolkien derived variety. Terry Brooks' "Sword of Shannara" had come out only a few years earlier when I was eleven and that sort of pastiche was the rage at the time. Most of the fantastic fiction I read was full of elves who spoke poetry, dwarves with long beards and axes and goodhearted small folk.

There had been some other exceptions, of course. My dad had the first couple of Lin Carter's "Flashing Swords" anthologies and Karl Edward Wagner's "Death Angel's Shadow" and I'd read them. But none of them compared to what I found in "Conan the Warrior".

"Red Nail" pits Conan and the female mercenary, Valeria, against dragons and the warring denizens of Xuchotil. Xuchotil is an entirely enclosed city made of jade and other rare minerals. Within, two factions have been fighting each other for generations. With Conan's arrival things come to a bloody head.

I was taken by the grim brutality of the story and the confidence and ferocious efficiency of Conan. The violent action is, suffice it to say, exciting and the setting fascinating. There is color and directness to Howard's writing and it grabbed me by the collar and shook me hard.

The second story is okay. I've never gone out of my way to reread "The Jewels of Gwalhur", but the third story, "Beyond the Black River" is the one the secured my respect for REH. I've read it numerous times and even listened to a pretty serviceable audiobook version.

It is different from the rest of the Conan cycle - Conan is a secondary character. It's told from the point of view of an Aquilonian settler, Balthus. He encounters Conan and together they're caught up in the beginnings of major uprising by the Pictish tribes. There are sorcerers, swamp demons and hordes of very Mohawk-like Pict warriors.

It's simultaneously my favorite Howard and Conan story and I can't recommend it enough. On a simple level the story is fast paced, violent and colored with bloody red strokes. It also presents Howard's ideas about civilization and barbarism forcefully. If you don't like the story you probably won't go for the rest of Howard's stories but if you don't like it then you probably wouldn't be here in the first place.
Posted by The Wasp at 7:22 PM 2 comments: