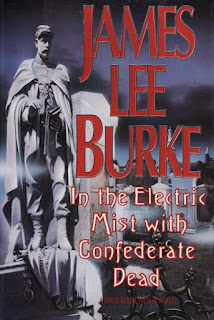 Writing my Charlie Parker post the other day, I remembered I'm no longer up to date on James Lee Burke's Dave Robicheaux series. It's been nearly a decade since I read one - 2008's Swan Peak - and after so many years I think it's finally time to catch up. Since then there've been four more books with another coming next year: The Glass Rainbow (2010), Creole Belle (2012), Light of the World (2013), Robicheaux: You Know My Name (2018), Ball and Chain (2019).

The series starts off with The Neon Rain (1987). In this book Dave Robicheaux is introduced as an alcoholic and a Vietnam vet and serving as a New Orleans police detective. He has a far too intimate relationship with violence. As the series progressed he was brutalized by fate and the corrupt and evil figures who haunted an increasingly phatasmagorical Louisiana.

Only one book, the stunning In the Electric Mist with Confederate Dead, could reasonably be called a supernatural story (but then, it could all just be alcoholic hallucinations). Nonetheless, Burke's Louisiana is haunted by the ghosts of murder victims crying out for justice, or at least to not be forgotten. The evil done by the gangsters, venal businessmen, and corrupt politicians that plague the state, stains and warps everything. Some villains even seem to reek of hellfire and sulfur. The Robicheaux books aren't paranormal thrillers or magical realism, but they have a fantastic (and fantastical) sense of place. Burke writes not just like he knows every back alley in New Orleans and dirt road of Iberia Parish, but the region's secret and forgotten history as well. 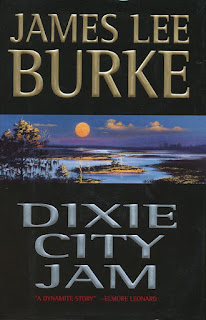 Not many people believe this, but in the early months of 1942 Nazi submarines used to lie in wait at the mouth of the Mississippi for the tankers that sailed without naval escort from the oil refineries at Baton Rouge into the Gulf of Mexico.
It was a shooting gallery. Because of wartime censorship the newspapers and radio carried no accounts of the American ships sunk off the Louisiana coast, but just after sunset people could see the oil fires burning on the southern horizon, like a quickening orange smudge low in the winter sky.
As a little boy in New Iberia, I heard shrimpers talk about the burned, oil-coated bodies of four merchant sailors who had been found floating like lumps of coal in an island of kelp, their sightless eyes and poached faces strung with jellyfish.
I had nightmares for many years about Nazis, who I imagined as pinch-faced, slit-eyed creatures who lived beneath the waves, not far from my home, and who would eventually impose a diabolical design upon the earth.

I've read seventeen entries in the series which is about 6,000 pages of story, so it shouldn't surprise you to read I fail to remember most of the details. I do, however, remember the general flow of Robicheaux's career and the brutalities inflicted on him by all manners of low characters and the tragedies he suffers. Always a good, if haunted, man, Robicheaux gradually becomes like something out of myth, a crusader armed with a pistol and a badge.

There have been plenty of similar characters - hard men who mete out justice in a hard world when no one else will - in crime fiction. It's not an original archetype. What separates the Dave Robicheaux books from so many others is Burke's exquisitely evocative writing about place. Whether the majestically corrupt city of New Orleans or the lush, green parishes of rural Louisiana, it pulses and seethes with life. Like Chandler's Los Angeles, Burke's fictionalized version of a real place seems somehow truer and more real than a non-fiction depiction. 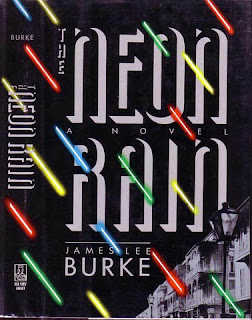 I just finished The Neon Rain (1987). I liked it well enough, but if it had been the first book I read in the series, and not In the Electric Mist With Confederate Dead, I probably wouldn't have read any more.

The Dave Robicheaux of this first book is an asshole. There's no beating around the bush about that. He confronts people even when he knows better, dismisses people who can help him, and is basically just an annoying dick. Not all the time, but most of the time.

The mystery in The Neon Rain isn't very compelling, another detrimental weakness. There's nothing original about it and if it feels a like something you might have seen on Miami Vice you'd be forgiven. It's also not plotted very well. You can see where it's going all of the time, mostly because you've seen it before.

The villains aren't very compelling either. They are mostly cookie cutter mid-eighties-style Central American drug lords, ex-government spooks, and central casting Mafiosi. Only some sharp dialogue keeps them from being completely forgettable.

On the other hand, it is interesting to see Burke beginning to chart out how the series will develop. American involvement in Central America is what propels events in The Neon Rain. Robicheaux becomes convinced the dead woman he found while he was fishing was murdered, not just an overdose victime. His investigation leads him to a major drug dealer originally from Nicaragua. From there he finds himself threatened by a gang of assorted thugs from Nicaragua, Israel, and the CIA.

This is something Burke will come back to time and time again in the later books. Someone is murdered, often a person of no consequence in polite society, and behind it are larger forces protected by wealth and power from justice. Confronting the sinister powers that be will become Robicheaux's
raison d'être as the series progresses. There are also flashes of Robicheaux's Catholicism, a significant factor in propelling his unending drive for justice.

If you're going to read this series - and I heartily recommend you should - you have to start with this book. Robicheaux, obviously, is introduced, but there are also his crazed NOPD partner, Clete Purcell, and the angelic Annie. Despite the failings of the story, the weak villains, it's worth reading just to see where everything starts.
Posted by The Wasp at 1:03 AM 2 comments: