My new banner art is part of Carlo Bossoli's painting, The Battle of Solferino. From the little bit I can glean from the badly translated Italian Wikipedia page, he was Swiss born naturalized Italian. He was hired by a British publisher to follow the Piedmont War (2nd Italian War of Independence) and create lithographs. Later, the Prince of Savoy commisioned him to paint pictures from the war. This is one of them and it can be seen in the Museum of the Risorgimento in Turin. Risorgimento means resurgence and it was the word used to describe the movement to unify Italy during the 19th century.

Solferino was the climax of the war. A French and Sardinian army under Emperor Napoleon III smashed into the Austrian army commanded by Emperor Franz Joseph I. At the end of the day the Austrians were beaten and retreated back to the protection of their fortresses called the Quadrilateral. Soon after, peace negotiations started.

When I tweeted the painting above yesterday, Teresa Edgerton remarked how gorgeous it is and that it would make a great book cover. I don't have a book in need of a cover, but I do want a new banner. 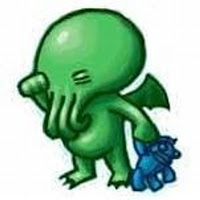 So the Chaosium Cthlhu Mythos project I embarked on late last year has clearly fallen by the wayside. I haven't posted anything on it in months and I haven't been able to make any headway in the next book, Cthulhu's Heirs, for weeks. Every time I tried to get going again I found myself distracted by anything else. I just couldn't stay focused on the stories, no matter how good. So, I'm calling it quits for now. Maybe I'll go back in the future.

What I AM interested in right now are the various wars and colonial actions between 1789 and 1918, a period the repellent Marxist historian, Eric Hobsbawn, crafted.  The French Revolution represents a shattering of the feudal, social, and relgious order in most of Europe. At the conclusion of the Napoleonic Wars in 1815, the Great Powers attempted to re-establish the old order at the Congress of Vienna and it never really took. Between that span, nationalism sparked numerous revolutions and wars. France, England, and many other powers continued their imperial expansion bringing millions of people under their rule.

The slow-motion race toward the Great War and the vileness of the colonial undertakings are fascinating. At a time of rapid cultural and social growth, of scientific advancement at a speed never before experienced, the developed nations of the world seemed bent on proving themselves by force of arms and with bloodshed. From my cossetted early-21st century place it makes little sense. But of course it did to millions upon millions of educated people at the time.

When I read history, when I encounter the past, I try hard not to simply dismiss it because people and societies aren't as liberally minded as we like to think of ourselves today. People weren't evil (okay, some of them clearly were), but instead, had the same sort of complex thinking and understanding of human actions we have but with completely different underlying assumptions. My hope is to come to a greater understanding of how people came to such different conclusions than we do (most of the time) today.

Between 1815 and 1914, Europe saw numerous wars. Among them were the First and Second Italian Wars of Independence, and the Austro-Prussian and Franco-Prussian Wars. Even poor little Denmark gets ravaged by the Prussians.

The decaying state of the Ottoman Empire led to three wars between the Turks and the Russians. In 1882, Britain sort of, kind of, took control of Egypt from the Ottomans and in 1911, Italy helped itself to Libya. The British supplantation of the Ottomans in Egypt led directly to various excursions into the Sudan. 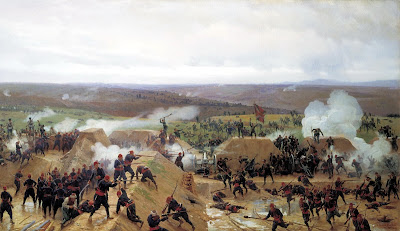 The Japanese make their entrance onto the world stage by defeating first China in 1894, then Russia in 1905. 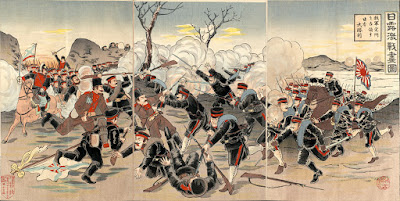 None of these had the scope or duration of the Napoleonic Wars, but they were brutal and showed the way to the industrial slaughterhouse of the Great War. 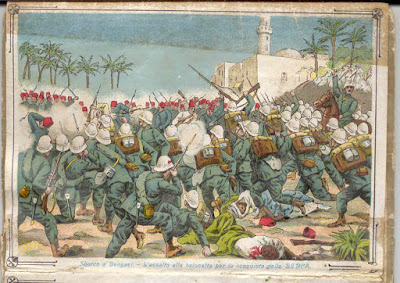 Then, most egregiously, there are the numerous colonial conquests and exploitation. Germany, France, Belgium, England, and Italy into Africa. England, France, Russian, Japan, and more into China. Sometimes the colonized had the temerity to rise up, hence the Great Mutiny and the Boxer Rebellion. The Boer Wars, if not perfectly, fit into the catergory of uprisings as well.

The greatest proof of the failure of the Congress of Vienna is the Great War. All the nationalism, all the competition between the Great Powers for colonial possessions, martial and economic power, exploded in the summer of 1914. Though sparked by the assassination of the Archduke Ferdinand, heir to the throne of the Austro-Hungarian Empire, it had been building for a long time before that.

At present, inspired by the centenary of the Great War, I'm reading
The Price of Glory: Verdun 1916 by Alistair Horne and The Marne:1914 by Holger Herwig. Both are excellent studies of the respective battles, providing excellent studies of the commanders, strategies, and tactics involved. Both books go a long way to showing the disastrous conduct of the battles were more the result of failures by the generals to understand the changes wrought by technology. Rare were the commanders who really were able to take these things into account and incorporate them into tactics and strategies.

So, that's what I'm doing here, for the next few months at least. Oh, at I'm leaving the US out of this. Sure, we were doing the sames things as Europe (and Japan). We had a bloody expansionist period, a bloody war of consolidation, and a nice quick war with Spain and colonialism. But, as an American, I'm already familiar with it, so I'm not looking to read much about it now (but maybe next time. I've got two good looking books about the Spanish American War that straring at me from the shelf).


Oh, and I'm too bored/tired right now, but I will be updating the banner.
Posted by The Wasp at 10:52 PM 4 comments:

I guess every fanboy and girl is going to post Sir Christopher's death notice today, and why not? Growing up in the seventies, his portrayal of Dracula was ubiquitous on television. Forget, Lugosi, Lee was the Count.

When I was a teenager and saw The Wicker Man for the first time it was also the first time I saw him out of his Dracula uniform. His performance as Lord Summerisle is mesmerizing. It remains my favorite of his many performances. His turn as Death in the Discworld animated movies is a close second, though.

By all reports he was a good and brave man. RIP, sir. Thank you and good bye. 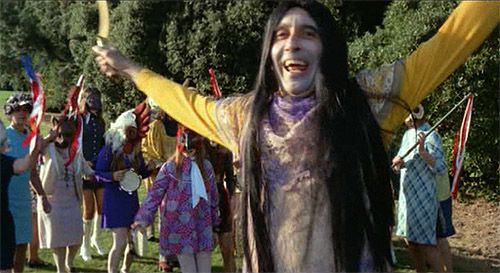