Barbarians at the Gates of Hollywood by P.J. Thorndyke

It's been nearly two years since I wrote anything for Black Gate. Save a few posts here, I've not done much writing at all. Every now and then, John O'Neill, captain of the good ship Black Gate, sent me an inquiry to try to entice me back into the fold. Until last month none of them proved tempting enough. Then I got P.J. Thorndyke's Barbarians at the Gates of Hollywood.

The book is absolute gold, albeit on a subject that rarely shines: sword & sorcery movies. They're mostly tripe, but, the story around them and about their creation is fascinating. I recommend Thorndyke's book to anyone with the slightest interest in low-budget movies as well as any S&S reader looking for a great resource on, no matter what the films' quality, an important part of the genre's history.

For the full review go HERE. 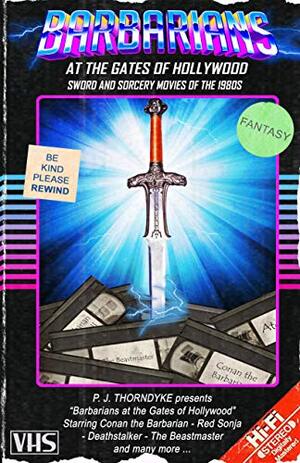 Email ThisBlogThis!Share to TwitterShare to FacebookShare to Pinterest
Labels: Barbarians at the Gates of Hollywood, Black Gate, P.J. Thorndyke

Every October, the luminous Mrs. V. and I sit down to watch spooky (but not too spooky) movies together. I've long thought one of my favorites might be too much for her, but rewatching it last year, I realized it isn't. Unfortunately, while she indeed didn't find it too creepy, she also didn't really dig it. Oh, well, it's still one of my favorite horror movies. 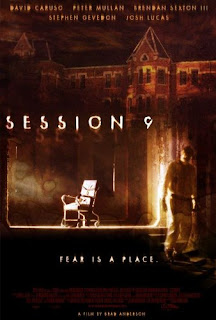 When it all comes together - story, atmosphere, acting - you get something that will you haunt you a long time after the screen goes dark and the house lights come up. Played by Peter Mullan, Gordon Fleming runs a faltering asbestos removal business. In hope of saving it, he takes on a seemingly impossible contract to clean up a massive old asylum in one week instead of the anticipated three.
Session 9 was filmed on the grounds of Danvers State Hospital, a closed facility outside of Boston. Built in 1878 and designed for 500 to 1000 patients at best, by the 1940s over 2000 people were housed there. Like most such facilities across the country, budget cuts, changing approaches to mental health treatment, and horrible conditions, it was closed. Since the movie was made in 2000 most of the complex has been demolished despite efforts to preserve it. 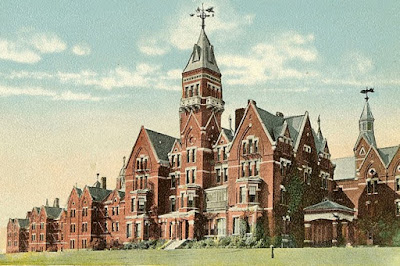 The men on his crew, including a terrific David Caruso, balk, but the chance to make a big bonus is enough to get them all on board. When they discover a cache of interview tapes with a notorious resident of the hospital things start to get strange. Then they get terrible. 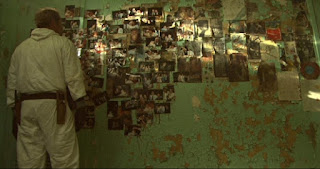 Session 9 builds much of its atmosphere out of relics, real as well as props, from the brick corpse of the asylum. Real photos from long-dead patients decorate the walls of one room, and the place really was plagued by ancient, crumbling plaster and asbestos. The graveyard is actually fake, but it was modeled on the real one nearby.

When I saw this the first time (at the Angelika), I had no idea what I'd be getting. I knew it was a horror flick, but I only knew Brad Anderson from his excellent comic Next Stop Wonderland. Every time I've watched it since, it still manages to raise a chill. Like The Haunting, it puts to the viewer the question of whether events are supernatural or not.

The titular session tapes from an infamous killer once held in the hospital are fake. Nonetheless, they sound real enough. Each tape brings the cast (and the viewer) closer to a shadow prowling the ruins' hallways. Whether their final revelations are real or not is a question that persists until the film's final frames.

I have my own opinion on that, but the movie as it stands (there are deleted scenes that can be seen as strengthening one of the two sides) leaves the question unanswered, a black ambiguity that leaves Fleming's actions mysteries to the very end. This, plus the atmosphere of a place that was a real-life house of horrors and the cast, make this a movie that holds up under repeated viewings.