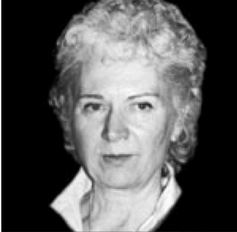 "She was tall as most men, and as savage as the wildest of them, and the fall of Joiry was bitter enough to her heart as she stood snarling curses up at her conqueror.
The face above her mail might not have been fair in a woman's head-dress, but in the steel setting of her armor it had a biting, sword-edge beauty as keen as the flash of blades. The red hair was short upon her high, defiant head, and the yellow blaze of her eyes held fury as a crucible holds fire." 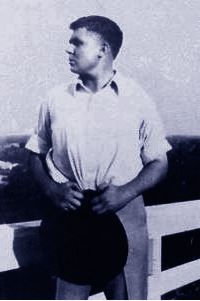 “Let my tribe remember,” I said, speaking slowly. “Let the tale be told from village to village, from camp to camp, from tribe to tribe, so that men may know that not man nor beast nor devil may prey in safety on the golden-haired people of Asgard. Let them build me a cairn where I lie and lay me therein with my bow and sword at hand, to guard this valley for ever; so if the ghost of the god I slew comes up from below, my ghost will ever be ready to give it battle.”

Email ThisBlogThis!Share to TwitterShare to FacebookShare to Pinterest
Labels: 107, birthday, James Allison, Robert E. Howard, The Valley of the Worm

Issue #12 of Swords and Sorcery Magazine On Line

If it seemed like I gushed a little about Issue #10 of Swords and Sorcery Magazine, I'm positively nuts about Issue #12.  It's been a steady upward path for the magazine since its inception last year and this issue makes a great case that my worries about Issue #10 only being a one-of were unfounded.  It's may not be everyone's idea of S&S but it should meet anyone's idea of good stories.
"The Counter of Aderwyn" by Phil Davies is the absolutely first fantasy story I've encountered about accounting.   Young Indigo is skilled at, and obsessed with, counting.   In a world where accountants are held in the highest esteem, it's a trait with distinct possibilities.
One day while counting ships, Indigo is told by a Gont (small, mischievous creatures with poor reputations) that he will be the Counter of of the royal city of Aderwyn.  Indigo, irriated that the little creature would mouth such an impossibility, turns to walk away.  Nonplussed, the Gont goes on to tell Indigo that when he accedes to the exalted office of Exchequer of Aderwyn he will come to bless him.  What follows is a tale that wouldn't feel out of place among Clark Ashton Smith or Lord Dunsany's dark little tales.    "The Counter of Aderwyn" is the best story I've read in this magazine and one of my favorites of the past twelve months.  This is a real good one and I'm telling you to take the time to read it.
"Black Bones" by Frank R. Sjodin is a more straight ahead work of S&S.  Led by the young warrior Jarn, a party of soldiers has been sent to root out the members of a peasants' uprising and the priests supporting them.  They arrive at an ancient temple and swiftly dispatch a trio of priests unwilling to surrender and accept a promise of safe exile.  It's inside the temple that Jarn discovers real danger.
Too many of the magazine stories I read suffer from reading too much like extractions from a much longer work.  It doesn't always ruin them but they don't stand by themselves as well as I'd like them to.  The events of the peasants' uprising are left a little too vague and the background's a little vague.  Still, it's not unexciting and foozle in the temple is pretty nasty and its defeat unique.  I also appreciated the unanswered questions at the story's end.  If real folks don't know the answers to all life's questions why should a ink and paper one?
This month's editorial brings a bit of news.  Editor Curtis Ellett writes he's planning to put out an anthology of the best of the magazine's first year's stories.  A vote will be held on their facebook page, so if you want to participate, keep your eyes on that page.
Posted by The Wasp at 8:02 PM No comments:

So that 1-click button on Amazon is a devilishly dangerous.  If something catches my always roving eye or, worse, is on sale - boom - I can just click that button and there's new book on my kindle.  One of the coolest things with e-books is, like when compact discs first started coming out, long out-of-print things are reappearing.  I mean I got Murgunstrumm and Others for about five bucks not hundreds.

I'm reading the Cave and Carter right now.  So far, "Murgunstrumm" is living up to the hype I've read about it over the years.  It's potent reminded of the editorial brilliance possessed by Karl Edward Wagner.  I'm still only a few pages into "Thongor".  It contains a story by Robert M. Price,  and I've always loved his pastiches of REH and HPL so I've got some hopes for it.
"Prince of Thorns" I finished already, and I really don't have anything to say about it that hasn't been said in dozens of other places. Suffice it to say, I read it in two nights and ordered, at full, painful price (I am very, very cheap concerning the price of individual books, especially electric ones), "King of Thorns" within minutes of turning the last pixelated page on my kindle fire.  It brought to mind Moorcock and, perhaps, a more deftly Black Company.  Jorg is one of the most captivating narrators I've encountered in some time. 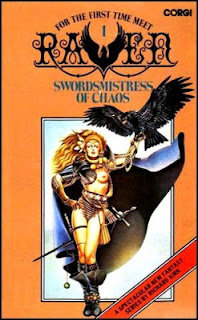 Let's start with the covers.  The original cover on the 1978 Corgi edition is one of Chris Achilleos' barely dressed Amazons (I don't know whether she was inspired by the original painting or the cover, but Kate Bush got all dressed like the picture for her video for "Babooshka").  The cover by Royo for the 1987 edition is less revealing but cheesier.  It's got a real, and terrible, Sandahl Bergman as Valeria thing going on.
Clearly there's a bit of fan servicing going on with both these covers.  It's that damnable Red Sonja and her chainmail bikini influencing every other Amazon's depiction.  Or the fact that, like Red Sonja, the target for these books appears to have been a certain type of male reader.
"Raven - Swordmistress of Chaos", is first in the series.  As I wrote earlier, Kirk was actually at times Angus Wells or Robert Holdstock and sometimes both.  This one was co-written by the pair of them.  It stands firmly in the trashier wing of seventies swords & sorcery.  From cover to contents, despite having a tough female protagonist, this was clearly written for a male audience.  I'm not saying there mightn't be some feminist barrier breaking going on here but I am saying that if it is it's only a by-product. 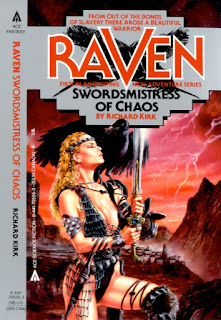 Raven's a young woman who was taken prisoner as a child and later raped by one of her captors.  The novel opens with Raven escaping after several years of imprisonment in the slavepens of the Southern Kingdom.  Only the attack of some mysterious, dark figure streaking out of the night sky that kills the hounds tracking her prevent her immediate recapture.  The next day, while free, she falls into the hands of a slave caravan bound for kingdom of Karshaam.
Soon she's rescued from that predicament by the mysterious Spellbinder and a bandit gang led by one Argor.  While the bandit leader, Argor, is smitten by the blonde beauty, he's told to leave her alone by the mysterious (and black-clad) Spellbinder.  He makes it clear Raven's fated for great things stands to be a weapon in some great future conflict.  As she's informed later by a magical stone, "(she is) one of this world's pivot points, you rests the destiny of the future".
After Spellbinder sets Raven to training in all manner of martial skills (the Kassamian sabre, the scimitars of Xandrone, etc.), he leaves the outlaw band on some private mission.  Soon she is being schooled in all sorts of martial arts by She also falls into his bed fairly quickly.  Have I mentioned, there's a fairly high, and often silly, sex-quotient to "Raven - Swordsmistress of Chaos?"  There's titillation aplenty throughout the story.  Fortunately, while much of it's gratuitous, it's never sadistic (the rapes all happen off-camera and serve as revenge motivators), and it all happens with Raven pretty much in control of the situation.
Following her rescue and training, Raven is taken on a long series of travels and adventures.  After visiting the Temple of the Stone, she and Spellbinder learn they must recover the Skull of Quez.  From there come ocean voyages, duels with pseudo-vikings and magical ones with evil wizards.  Later, during the actual search for the skull (as opposed to simply journeying from one place to another), there's an ambush by and battles with beastmen.  Naked beastmen.  We know that because there's at least two mentions of enormous, swinging genitals.
Perhaps the book's funniest, or at least dopiest moment, comes when the lustful altana of Kharsaam practically assaults Raven in her bedchamber.  Only if she accepts the altana's attentions will she help rescue an imprisoned and slated for execution Spellbinder.  Drawn by power of the altana's "great green eyes" she submits.  Fortunately, she discovers a love, or at least lust, like she's never felt before, even with Spellbinder.
And still, I can't bring myself to totally dismiss this book.  Despite the quotes I've used, the writing's not all bad and there's an enjoyable inventiveness to the world and its inhabitants.  Raven isn't anyone's doormat and her ability to defeat stronger and more experienced men is sometimes even believable.  If you decide to take the risk just be ready for poorly done, teenage boy level lubriciousness.
At some point I will read the rest of these books.  Mostly because Robert Holdstock was the author of "Mythago Wood", one of the best "Matter of Britain" stories.  He collaborated on the next Raven book, "A Time of Ghosts" and did the fourth one, "Lords of the Shadows" solo.  Part of me holds out hope that there's something good to be discovered in between those covers.  A lot of what I'm doing here is trying to uncover those hidden nuggets of S&S greatness I've somehow missed.  Fingers crossed.
Posted by The Wasp at 1:42 PM 15 comments: