Last time I posted Barbara Remington's Lord of the Rings covers for Ballantine. Those were the first versions of Tolkien's books I read. They were my dad's and they eventually fell apart. When I bought a new set, they had covers featuring paintings by Tolkien. As much as I love Remington's on-the-nose sixties art, I prefer Tokien's. I love his art nouveau-influenced style and the rare chance to see an author's actual vision put to paper. I'm still looking for good shots of more of his art to post, but these four covers will do in the meantime. depicted: Bilbo and the dwarves escaping the Elf King's hall 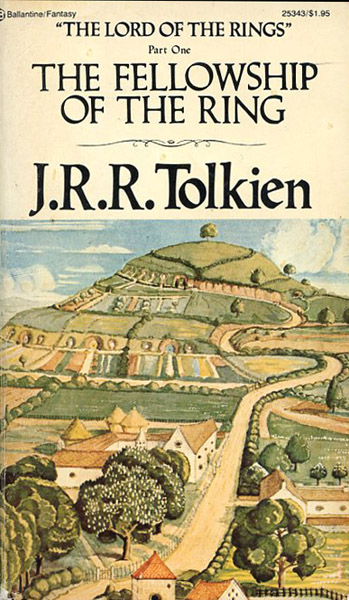 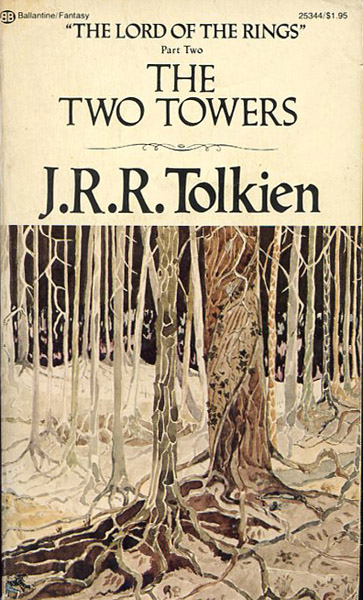 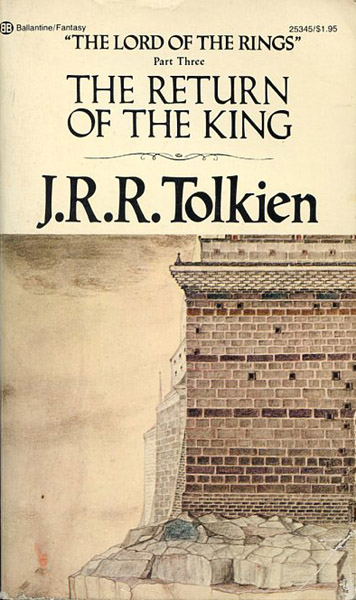 Many of the books I'm hoping to read for my new Black Gate column were published by Ballantine books, some as precursors to and others as part of the famous Ballantine Adult Fantasy line. That's got me looking at my shelf-full of them and their beautiful covers. Several times over the years I've written about the quality of old book covers compared to modern ones. It should come as no surprise I think the old ones come out on top most of the time.

While Gervasio Gallardo is probably the single artist most recognized from the Ballantine AF books Lin Carter edited, there were other artists of note, especially for the pre-Carter books. Here are some of my favorites, all by the recently deceased Barbara Remington. 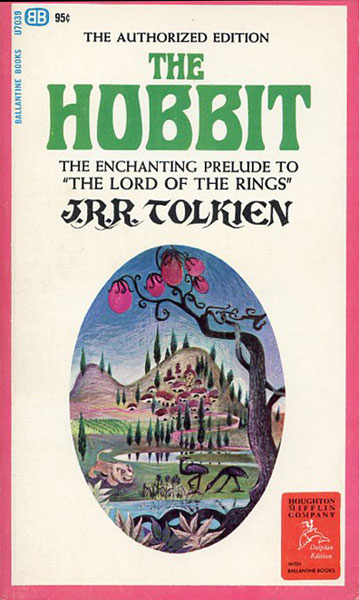 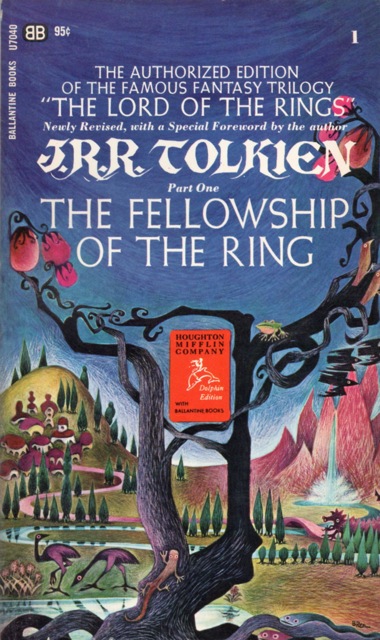 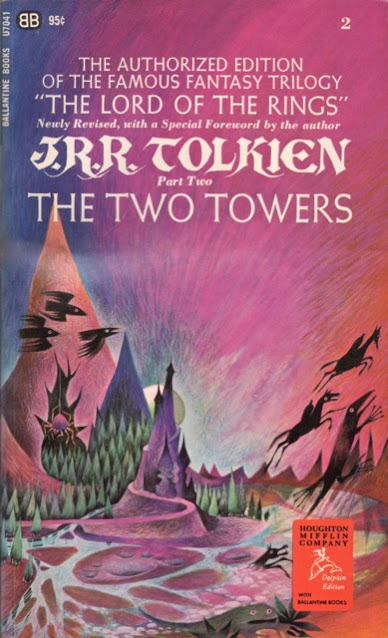 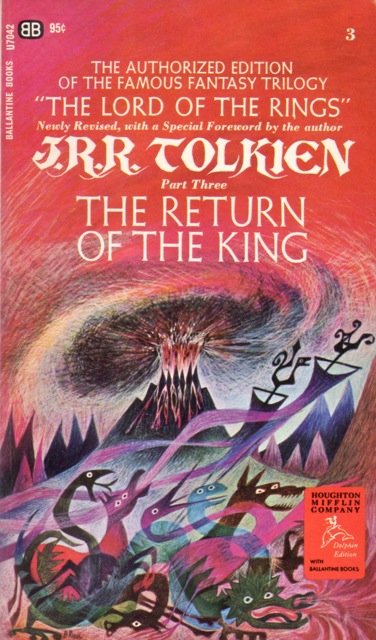 These hippy trippy covers were my first vision of The Lord of the Rings. Tolkien couldn't understand them, but that's because Remington wasn't able to read them before doing the covers. She said she would have done something very different if she had, but I'm glad she didn't. I love these ludicrous artifacts from stranger days. 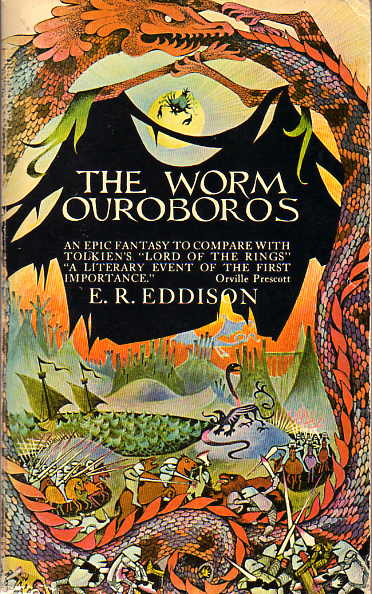 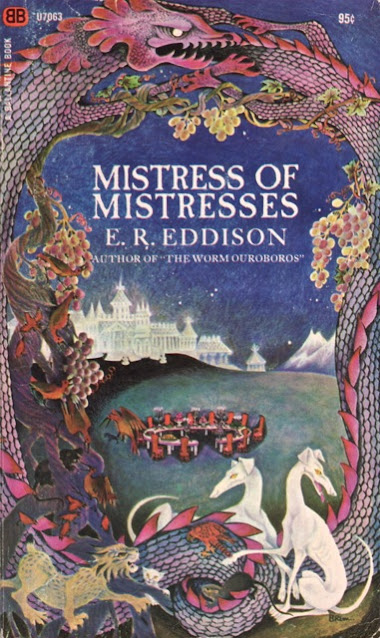 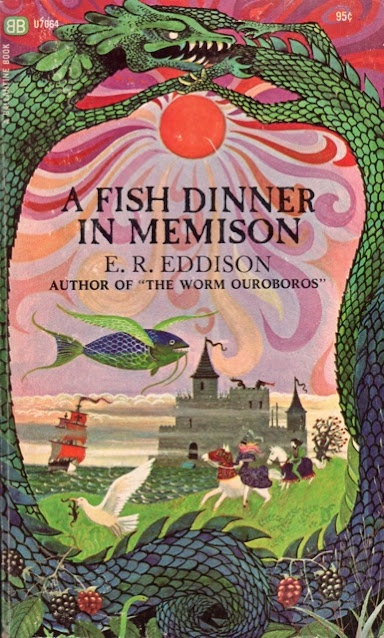 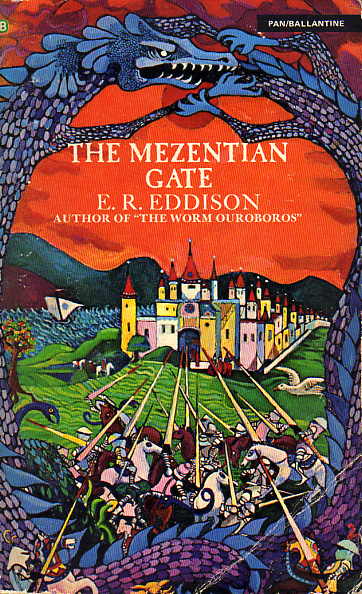 The first three of these are by Barbara Remington, while the fourth, possibly by a different artist, is uncredited. I hope to tackle Worm sooner rather than later, but I make no guarantees. These covers are remarkable. I love the ouroboros motif and the high middle ages depictions of the knights and castles. The dogs and lions on Mistress have a heraldic quality reflects perfectly echoes Eddison's medieval stylings.

I look and look at both these sets of covers and I wonder why must we continue to suffer God awful photoshopped covers.

Back in the Saddle Again: A New Monthly Column 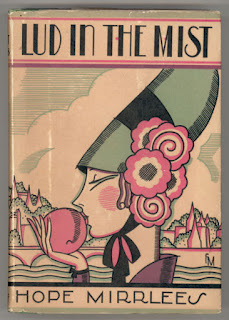 After nearly two years of retirement from Black Gate, I'm coming back. I'm brushing the cobwebs out of my brain, flexing my writing muscles, and gearing up for a return to the electronic pages of the best fantasy (and horror, and sci-fi, and crime fiction) magazine around. The luminous Mrs. V. has already signed back on to edit my work so it'll be coherent.

There'll be two significant changes. The first is I'll be posting monthly, not weekly. Each new article will post on the first Friday of the month, starting in December. I figure a lighter schedule is the way to go. Five years of reading and reviewing three books and a half dozen or more short stories every month burned me out.

The other is I'll be reading classic works I haven't read before (or only once a long time ago - I've always got to give myself some sort of wiggle room - which specifically mean Gormenghast). The first book, which I've already started, is Hope Mirrlees' Lud-in-the-Mist. The Last Unicorn, and The Ship of Ishtar, as well as some Gothic romances, including Melmoth the Wanderer and Frankenstein, are some others I think I'll give a go. I can imagine reading things not as old, but I definitely want to focus on some of the books most important to the evolution of fantasy literature. 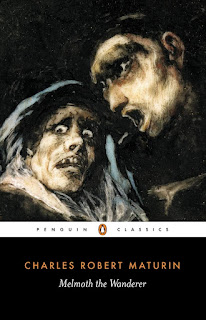 I want to dig into fantasy from before genrefication took hold. That's what I call the point when fantasy got locked down. It was as if clear limitations were staked out marking out what is and isn't fantasy. Fantasy was reduced to no more than a commodity and tropes have come to supplant the unique and strange. Much contemporary fantasy seems to be written by authors for whom only other fantasy exists and those are their only influences. It's a copy of a copy, not something inspired and drawn up from the deeper wells of our shared cultures and myths. It often reads like a gaming campaign, complete with detailed magic systems and character classes. There's also the whole grimdark business which seems intent on eliminating the fantastic from fantasy much of the time.

I think it was the explosion of epic fantasy series in the eighties and nineties and the commercial success of the genre that much of the strangeness went out of it. When Lester Del Rey deliberately set out to find a Xerox copy of the Lord of the Rings and discovered The Sword of Shannara (reviewed here) can be seen as the actual start of all this. For over a decade we were blessed with an endless slew of often hard to differentiate epic series. Now, with grittiness all the rage, everyone is aping George R.R. Martin or Joe Abercrombie. The tropes have changed a bit, but we're still getting lots of not very dissimilar epic series - just "grittier." 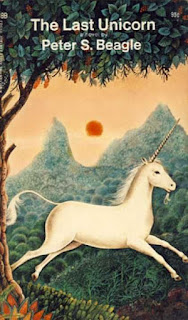 I know well-received books like Jonathan Strange & Mr. Norrell that don't limit themselves to the tired and true (hey, I haven't read that, so I might add it to the list) still appear from time to time, but they are anomalies. A few writers are still inspired by pulp and older fantasy (James Enge, Howard Andrew Jones, and Raphael Ordoñez  among them), but there's little room for the dreamlike imagination of many early fantasies or the magpie mixtures of sci-fi, horror, and anything else that suited the fancies of writers like William Hope Hodgson or Clark Ashton Smith. If you're not new here you know this is one of the hobby horses I ride the hardest. I'll make every effort to not be a bore.

I'm also hoping to get some Western movie reviews up again. It's not like I haven't watched a ton of them since the last time I posted a review (here).