A family medical crisis (over and not too serious, which I guess means it was really more a scare than a crisis) resulted in multiple hour-long drives to NJ this past Sunday and Monday. That meant no review at Black Gate this week of Cirsova Magazine and Pulp Literature. Next week, though. 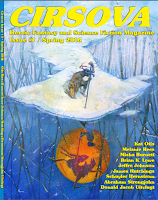 Cirsova is the sword and planet mag Keith West mentioned a few months ago, and while I didn't like all the stories, the good ones are very good. It's another example of a resurgence in interest in sci-fi and fantasy as it existed before the two genres were walled off from each other.

Author Raphael Ordoñez has written extensively about how his own fiction is informed by earlier writers like ERB and REH. Jeffro Johnson's recent Appendix N articles are super studies of many authors from the two genre's nascent days. And, of course, at the late, lamented (by me, anyway) Grognardia, James Maliszewski wrote many articles about pulp writing.

I think the reason stories rooted in that early tradition appeal so much to me is that much contemporary fantasy and sci-fi (especially) don't appeal to me. Either it's too dark for nothing more than darkness' sake, or it exists seemingly only to bear its author's social and political bête noires.

There's also a dearth of basic storytelling. Whether from lack of desire or lack of skill, too many of the stories in mags like Beneath Ceaseless Skies just drift over the page like puffs of smoke with no narrative force, no energy. Nothing happens. Say what you will about the prose of the pulp writers of the 30s, their goal was to spin ripping yarns, not create a drear, pastel smear of words.


Even more painful, as someone who has been reading sci-fi/fantasy for over four decades, I'm struck by the lack of grounding in these genres by so many modern authors. I don't expect a 25 year old writer to have read the same now ancient Clark Ashton Smith stories or Poul Anderson books I have, but I do think they should be aware of them. Ignorance of the past is not a good thing.

I know I'm painting with a ridiculously too broad brush, but it's as if the roots of much contemporary fantasy/sci-fi are planted in RPGs, TV, and comics. In of themselves, those aren't bad things, but they tend to be more concerned with the surface things of the genre. Real depth is missing.

So, when something like Cirsova comes along, I get excited. I haven't been as keyed up about a new magazine in some time. I wish them well, and am looking forward to their next issue.

Despite its title, Pulp Literature is a more refined creature than Cirsova. While there're several top notch fantasy stories, many of the thick (near 250 pages) magazine's contents are mysteries, and non heroic fantasy. I am astounded that it's been in print for two years now, and I've never heard of it. The current issue is over two-hundred pages long. At $4.99 for the kindle version, you cannot go wrong.

On a completely separate note, I've been diving deep into the waters of the US Civil War this past week. And by deep, I mean deep. Right now I'm listening to a two-hour presentation on the Battle of Stone's River by historian Earl Hess and others.

After hearing US Grant impersonator Dr. E. C. (Curt) Fields, Jr at the Civil War Roundtable of New York last week, I started dipping into my library. A chapter of Catton here, a chapter of Foote there.


Then I found that C-SPAN has a trove of lengthy videos like the one with Hess on every Civil War subject imaginable. I've already watched a pieces about Bruce Catton, WT Sherman, Joe Johnston, JB Hood, the Overland Campaign, and Sherman's Carolinas Campaign. It's dynamite stuff, but each one's at least an hour long, and I don't see any end in sight. It just might kill me.

Ever go through one of those periods when you just can't read? I'm in one right now. I don't have the patience to stay focused. My mind starts to wander to anything other than the words in front of me. I don't know why it's happening now or at any other time. There's not great doom hanging overhead or stress inducing situation make my brain itch. It's just one of those things, but it really ticks me off.

In the past, I've found the easiest way to jump start my ability to read is to reread something I love. Something that won't tax my brain much because it's already familiar.

I'm going back to Lovecraft. Or at least one of the Chaosium books. Sparked by a FB conversation with Charles Rutledge last week, I think I might return to my failed Mythos project from last year, but with a little more discretion. 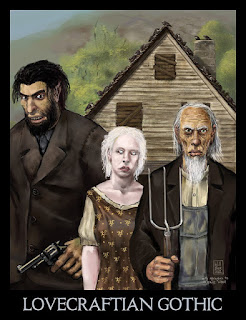 It was the collection of Lin Carter stories, The Xothic Legend that did me in.  Having come to appreciate Carter's super-enthusiastic fannishness, I went into the book hoping to enjoy it. It was not to be. Most of the stories are dull, amounting to little more than lists of names of books and deities. Suspense and atmosphere are things alien to the Xothic Legend. The California and Pacific settings are underutilized, and there's never a real sense of place. All in all, a disappointing undertaking on my part and enough to put me off all Mythos stories for the last year.

I did manage to stagger on and review The Mysteries of the Worm, the collection of Robert Bloch's Mythos stories. The stories range from good to great, and it provides an insight into Bloch's evolution as a writer. The earliest stories were written when he was still in his teens and the latest when he was in his early forties and has transitioned from pasticheur to an artist possessed of his own voice. But it wasn't enough to make me keep going. So I put away the Deep Ones and Dark Young of Shub Niggurath. 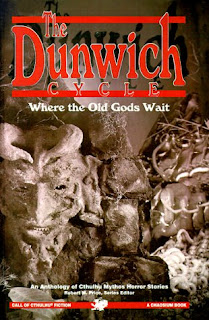 Now I'm bringing 'em back. Or at least occasionally, as the mood suits me and if the stories don't stink. It's just going to be a "from time to time" thing. Heck, I might not even read more than a single volume of the series. Right now, though, I've dived into the book centered around everybody's favorite town of inbred Massachusetts hill folks, The Dunwich Cycle. At the very least it should be enough to get me reading again.