C.L. Moore's final story about Jirel, sword wielding, flame-haired, mistress of Joiry, a domain found somewhere in Dark Ages France, is the penultimate story in Sprague de Camp's "Swords and Sorcery" collection.  Despite containing the Conan story, "Shadows in the Moonlight" ("Iron Shadows in the Moon"), and the Fafhrd and Gray Mouser story, "While the Sea King's Away", it's my hands down favorite in the book.

C.L. Moore, born Catherine Lucille in 1911 in Indianapolis, made her first professional sale hiding behind her sexless initials and introduced her first important character, Northwest Smith, in 1933.  That story, "Shambleau", was published in the November 1933 issue of Weird Tales.  The next year saw the first story about Jirel of Joiry, "Black God's Kiss".  It was printed in Weird Tales as well.

Over the following five years she wrote five more Jirel stories, including a crossover one with Northwest Smith called "Quest for the Starstone" (and co-written with her husband, Henry Kuttner).  While clearly influenced by Robert E. Howard's near single-handed creation of swords and sorcery, the Jirel stories are closer in mood to horror tales than the the more muscular sword swinging tales of Conan and the fictional followers he inspired.

"Hellsgarde" describes Jirel's terrifying journey into and subsequent night spent in the long abandoned castle, Hellsgarde.  Two centuries earlier its violent ruler Andred took possession of an unknown but supposedly priceless treasure.  He was set upon almost at once from all sides by numerous men bent on taking it for themselves.  In the end Andred was tortured to death and torn from limb to limb, his blood spilled out onto the floor of his keep.  The treasure, though, he kept hidden and for himself. 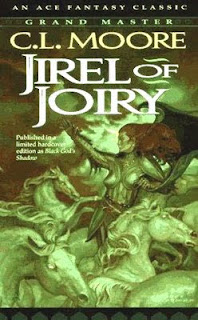 Jirel's undertaking is forced on her by Guy of Garlot.  He has taken several of her retainers hostage and their lives will only be spared if Jirel enters Hellsgarde and retrieves Andred's treasure.  Hellsgarde may only be found at evening and then, sitting in the middle of a marsh dangerous with quicksand, approached only across a long, narrow causeway.  Driven by the knowledge that Guy of Garlot's own keep is impregnable and his demand for the treasure is the only way to save her men, Jirel makes the sunset journey to Hellsgarde.

Crossing the causeway she sees several ranks of soldiers seemingly in wait for her at the castle gateway.  Only as she nears them can she see they're dead, propped up on their own spears thrust through their throats or torsos or limbs.

As she works to overcome her fear of the dead men and wonders how and why they came to be their the gate of Hellsgarde opens.  She is greeted by a man she sees as hunchbacked even though his back is straight. Jirel wonders if perhaps her impression is caused by the crookedness of his soul.

Jirel quickly learns that the crooked man's master, Alaric, is responsible for the deaths of the propped up soldiers.  He informs her that Alaric comes from a distant branch of Andred's family and has come to claim his inheritance in Hellsgarde.  He also ensures Jirel that Alaric will make her most welcome.

Daring to risk the night at Hellsgarde in order to determine if Alaric has come for and found Andred's lost treasure Jirel enters the castle.  Within she encounters only more strange and unsettling things.  The men who take her horse are more beast than man to her eyes and nothing they do shakes her from that impression.

Inside the great hall of Hellsgarde, she finds Alaric sitting before a roaring fire.  He is surrounded by a several girls and women, two boys and two great greyhounds.  Behind him is his jester, a dwarf.

Jirel quickly sees a similarity between Alaric, the doorman and the dwarf.  Though clearly not physically alike all three seem to be twisted by some great burden.  The women's faces seem hollow and the whites of their eyes too white.  Even the dogs seem wrong.  And yet she stays.

What follows her meeting Alaric is an escalating series of disturbing events.  Like "The Valor of Cappen Varra", "Hellsgarde" doesn't read like a more typical swords and sorcery story.  It reads like a nightmare from the sufferer's perspective.  Jirel's discomfort, fear and determination are all conveyed perfectly by Moore's clear but its precision doesn't detract from the dark dreamlike atmosphere of the story.

"Hellsgarde" is not like Conan or Fafhrd and the Gray Mouser.  It has little of the ferocious physicality of the former or the humorousness of the latter.  Moore's story has more of the strangeness of the best of Moorcock's swords and sorcery.  Once Jirel crosses the causeway to Hellsgarde you can feel your feet shift under you as you realize the story is bringing you along into the uncertainty that makes up the sleeping world.

Note - All six Jirel stories are available from Paizo in the collection "Black God's Kiss".
Posted by The Wasp at 6:01 PM