Murder Ballad in the Outback: The Proposition 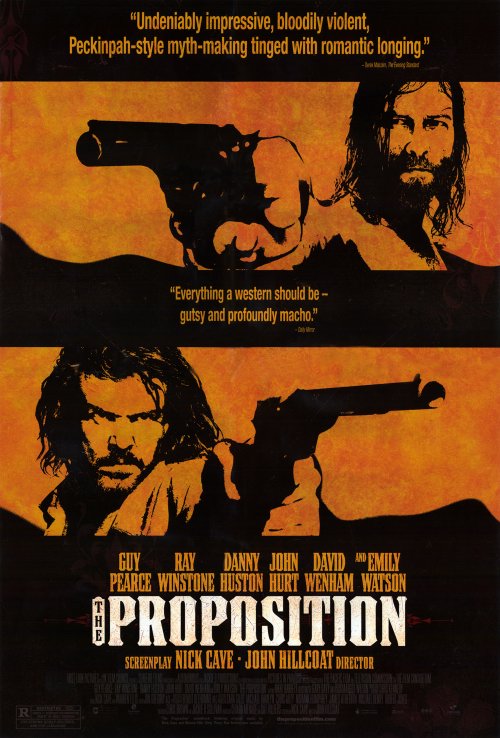 Hillcoat: “At that time, it was the last frontier. They basically just went further and further into the desert, into the most inhospitable terrain.”

Cave: “To me the major point was that it was so far out in the inhospitable countryside. So Captain Stanley and his wife can’t go anywhere, they just had to stay there. The answer to Stanley’s problems, really, is to quit his job and go somewhere where he and his wife should be. He’d probably have quite a nice life. And the same goes for the other characters as well.”
from a 2005 interview with director John Hillcoat and writer Nick Cave
I don't know much about Australian history, let alone that of its 19th-century frontier. I have seen Quigley Down Under - which I don't like that much - and that's about it. If that period was anything like it's portrayed in The Proposition, directed by John Hillcoat and written by Nick Cave, it was irredeemably harsh and miserable. The effort to bring civilization suffered at the hands of the rich and the violent. As the quote above states, the Queensland Outback, the movie's setting, was a place Europeans would have been better off avoiding. It is hot (in another interview, Hillcoat mentioned the desert temperature getting up around 130 degrees Fahrenheit), barren, and fly-infested. Whatever might be there, none of it seems worth the misery.
Following a brief, deadly shootout that opens The Proposition, Charley Burns (Guy Pearce), and his simple-minded brother Mikey (Richard Wilson), are taken prisoner by Captain Morris Stanley (Ray Winstone). Stanley informs Charley, that on Christmas Day, only nine days away, Mikey will be hanged in the town of Clarence. If, however, Charley accepts a simple proposition (work that title!), both he and Mikey will be pardoned and set free. All Charley has to do is kill his older brother, Arthur (Danny Huston). Arthur raped and killed the pregnant Eliza Hopkins. He is "an abomination" who needs to be stopped at all costs. The local Aborigines claim Arthur is a monster who turns into a great dog with sharp teeth.

Capt. Stanley: I wish to present you with a proposition. I know where Arthur Burns is. It is a godforsaken place. The blacks won't go there, nor the trackers. Not even my own men. I suppose, in time, the bounty hunters will get him. But I have other plans. I aim to bring him down. I aim to show that he is a man like any other. I aim to hurt him.

Charley accepts, leaving Mikey in the hands of the authorities. Viewing the burnt ruins of the Hopkins farm, he is clearly horrified when he discovers a bassinet, now never to be used. Arthur is assuredly the obscenity he's claimed to be.

On the road to his brother's hideout in the hills, meets a pompous, racist named Jellon Lamb (John Hurt) in a tavern. Realizing Lamb is one of the bounty hunters Cpt. Stanley referred to, Charley knocks him out and heads off into the hills. There he is rescued from a band of Aborigines who attack him by Arthur and his gang. For a while, it seems, Arthur is more a philosopher than killer, but this is soon proven to be on an illusion.
Meanwhile, back in Clarence, the townsfolk, led by the town's richest man, Eden Fletcher (David Wenham), demand that whatever deal Stanley brokered, Mikey Burns must be punished. Even Stanley's demure wife, Martha (Emily Watson), insists he must suffer. Against the Captain's best efforts, the boy is dragged out to be flogged. Before the sentence can be finished (after suffering exactly thirty-nine lashes), everything just stops. The townspeople walk away in disgust, and even the flogger gives up. Martha swoons at the sight of Mikey's ravaged back. Later, the torture will prove fatal, setting the stage for the final showdown between the remaining Burns brothers and Captain Stanley.
The showdown occurs after much bloodshed and mayhem, all of which plays across the harsh Outback. Most of the movie is bathed in ochre and sepia as if the desert sand has filled every pore and bathed every molecule. The landscape is all sharp-edged and the violence seems to actually seep out of it.
The cast is quite good, especially Pearce and Huston. They both  Of special note is the presence of two of the best-known Aboriginal actors. Tom E. Lewis is good as the tough Two Bob, one of Arthur's henchmen. Lewis starred in Fred Schepisi's 1978, The Chant of Jimmie Blacksmith. David Gulpilil, star of Walkabout and The Last Wave, plays Jacko, one of Stanley's deputies.
The greatest Westerns are moral tales set on the edge between civilization and the wilds. Good stands against evil, order against chaos, even if justice must be delivered with bullets and by a man who is too raw to live in society. Charley rode with Arthur, so we have to assume he has committed reprehensible acts. Still, from the start, he is repulsed by his brother's crimes. Even when it no longer matters to Mikey's fate, perhaps especially then, Charley does what's right.
The Proposition is one of the best Westerns to appear in the last two decades. It's a raw film in its acting, setting, look, and story. It also feels true to its time, not a harangue by someone upset the past doesn't conform to their ideals. It's a movie I know I'll return to in the years to come.

Rating - A: Certain scenes in The Proposition make it a tough movie to watch, but none of them are gratuitous or frivolous. The violence isn't played for thrills like an 80's vintage Hollywood action movie. Their power comes from their sparing use and their utter cold-heartedness. There are no witty rejoinders, every shooting and every beating is brutal, they never feel less than real and painful. It's got the same basic elements of American Westerns - the conflicts between lawlessness and civilization, whites and natives, and a frontier setting. Like the best of them, it presents them brilliantly and with deep emotional resonance. The Proposition is proof that the West is not necessary to make a Western. 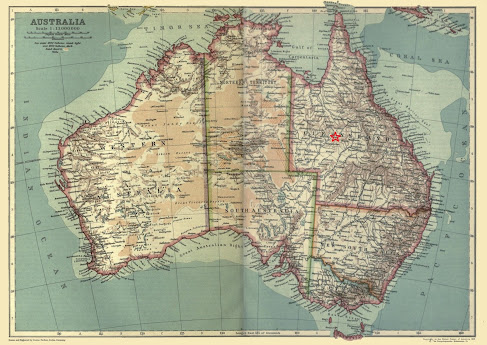