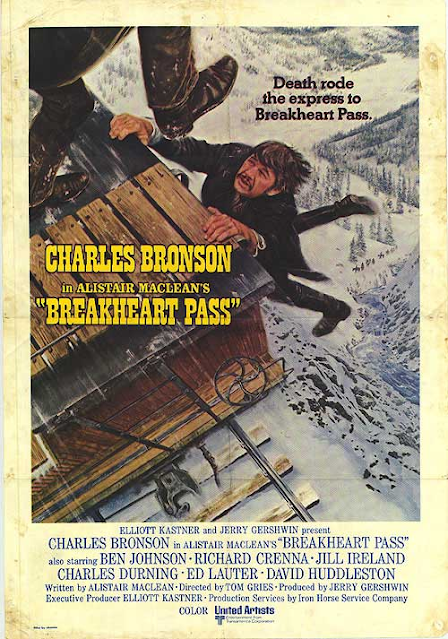 screenplay Alistair MacLean from his own book

Charles Bronson was a journeyman actor who slowly moved up the ranks of tough-guy actors until finally becoming a leading man in the late sixties and early seventies. Bronson, born Charles Buchinsky, grew up working in the coal mines of Pennsylvania. During WWII he served as a tail-gunner on B-29s bombing Japan. After the war, he slowly drifted into acting. He worked his way up through character roles and some leads in some B-movies, before becoming a major support actor in some big movies. It wasn't until the brutal and timely Death Wish (1974), that, at the age of 52, he really became a star. Many, many of his movies are terrible, often the results of contractual obligations. As he got visibly older, playing the violent hard man looked less and less believable and the quality of his scripts got increasingly declined. Do not let yourself suffer through Death Wish 3, 4, or 5 or 10 To Midnight.  On the other hand, The Mechanic (1972), Mr. Majestyk (1974), and, especially, Hard Times (1975), are paragons of seventies hardboiled filmmaking. Bronson's perpetual squint, sour croak of a voice, and physical hardness made him one of the most distinctive and well-known Hollywood tough guys of all time. 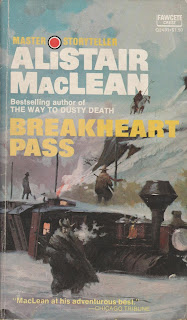 Alistair MacLean served in the Royal Navy during WWII and became a schoolteacher afterward.When his first novel, H.M.S. Ulysses (1955) made him a pot of money he turned to full-time writing. His follow-up book, The Guns of Navarone (1957) sold almost half a million copies in the first six months. After its success, he said "I'm not a literary person. If someone offered me £100,000 tax free I'd never write another word." He said similar things later, and considered himself a reluctant writer of limited talent who didn't understand why people bought his books. But buy them they did, with total sales of his books estimated at over 150 million copies. Fifteen movies were made from some of his novels, most notably the aforementioned The Guns of Navarone (1961) and Ice Station Zebra (1968).

Breakheart Pass, directed by Tom Gries is a movie that, I admit, holds a special place for me because I watched it with my dad. He was a huge Western fan, as well as a fan of MacLean and Bronson. Gries was another of those utility directors Hollywood used to be filled with. In addition to loads of tv episodes (he created The Rat Patrol), he directed one of Charlton Heston's best movies, the Western Will Penny (1968).* He also directed two of the best miniseries of the seventies: QB VII (1974) and Helter Skelter (1976). Breakheart Pass, unfortunately, doesn't match the quality of those films. Instead, it's just an average suspense thriller with a few fun, if not surprising, twists.

The movie opens with a train filled with soldiers, the Governor Fairchild of Nevada (Richard Crenna) and his fiancée, Marica (Jill Ireland - Bronson's wife, and co-star in  15 movies) making its way through the snow-covered mountains toward Fort Humboldt, stopping at the whistle-stop, Myrtle. While there, Marshal Pearce (Ben Johnson), with prisoner John Deakin (Bronson), forces his way onto the train over the soldiers' commander, Major Claremont (Ed Lauter) wishes. Deakins, a doctor and ex-college lecturer, it seems is wanted for a host of crimes including destroying a cache of Army munitions, making it a federal crime, and one for which the Marshal can demand he and his prisoner be taken on as passengers. Along with the train's crew, there are several other passengers, including Doctor Molyneux (David Huddleston), O'Brien, an aide to the governor (Charles Durning), and the Rev. Peabody (Bill McKinney). As you can see, that's about as solid a mix of character actors as you could ever have in a movie.Strange things begin happening at once. Two of Claremont's senior officers go missing before the train rolls out of Myrtle. Despite misgivings, the commander gives the order for the train to head out. The next day, Doctor Peabody is found dead. Deakins is asked to examine the doctor's corpse and determines he was murdered. Of course all eyes turn to Deakins, but he was securely tied up during the night and couldn't have done it. Or could he?

What follows is a moderately exciting actioneer. Most of the several mysteries - why is the train going to Fort Humboldt, what's in the cases, and who killed the doctor, among others - are revealed fairly soon. Too soon, for Bronson's tastes, according to Wikipedia. He wanted a particular big reveal kept towards the end as it was in the initial script.

The action scenes, largely outdoors (and often on the roof of the train) are pretty good. The several fights are good and brutal, and the film's climax with Indians (played by members of the Nez Perce tribe) and bandits fighting Deakins and company on the train is well done and looks great in the snowy countryside. It was also legendary stuntman Yakima Canutt's last movie. At age 79, he served as second unit director and coordinated the stunning derailment scene. 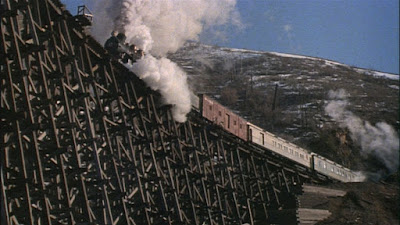 The movie was filmed in northern Idaho and from the dingy town of Myrtle to the snow-covered mountains the train rolls through, the movie looks good. The production used the Camas Prairie Railroad. Known as the "railroad on stilts" for its numerous wooden-trestle bridges, it's a great setting for a Western thriller. When Deakins is forced to climb down along one of those bridges to inspect a body, it looks uncomfortable in a way that can't be recreated with CGI or on a set.

Unfortunately, Breakheart Pass suffers from a trait common to many seventies movies - much of it looks like a tv-show. The interiors in Myrtle when Deakins is arrested and all the shots inside the train look lousy. It's not just the rear-projection shots of the passing landscape - something even Hitchcock had trouble making look good - but there's something about the way the scenes are framed and lit that makes them look fake and cheap.

It's unfortunate, because so much else about the movie is good. The acting - except for Jill Ireland (and that's more the script's fault than hers) - is solid. The outlandishness of the plot doesn't matter so much when everybody's selling it completely. Even though given too little screen time, the two big villains - Levi Calhoun (Robert Tessier, voiced by Paul Frees) and Chief White Hand (Eddie Little Sky) - are tough and menacing. Most importantly, Bronson is great. As I wrote about him in Once Upon a Time in the West, he wasn't a really inventive actor, usually sticking to the same Bronsonish persona no matter what the movie was, but he always had presence. He could seem very dangerous on the screen and when he's unleashed in Breakheart Pass, you can easily imagine him killing someone on top of a moving railcar for real. His persona makes even some of his most ridiculous movies, Telefon (1978) for example, much better than they should have been. The fake-looking set-bound sequences are a distraction that can't be avoided. An important part of a Western is creating a convincing recreation of the past - whether realistic or mythical - and when it looks like an episode of Barnaby Jones, it's a major failure.

Right after watching the movie, I picked up the book. I've never read any MacLean before and I doubt I'll ever read anything again (except maybe The Guns of Navarone). Maybe his contemporary thrillers are better, but this is bad. Elliot Kastner, one of the producers (who'd previously produced two other movies based on MacLean books: Where Eagles Dare and When Eight Bells Toll) had given the author an office in the studio to "therapy, as he says MacLean was suffering in his marriage and with alcoholism." The dialogue is stilted, the characters are given too much unbelievable background, and all sorts of Britishisms are left unchanged in a book set in 1870's Nevada. It's not very evocative of the setting. The screenplay, by MacLean himself, improves things greatly. It deletes all the silly backstory and makes Levi Calhoun (Sepp Calhoun in the novel), much more evil and threatening. It does eliminate some of the villains' motivations, but it's not enough of a loss to matter. The Idaho filming location more than makes up for the book's lack of any appreciable period atmosphere. 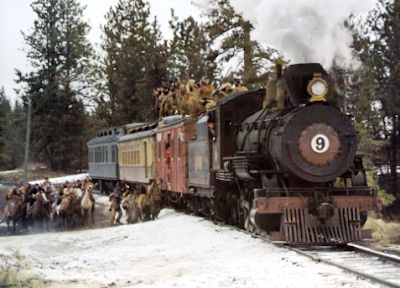 Rating - C: Rewatching Breakheart Pass after several years with a more critical eye still left me liking the movie. The soundtrack by Jerry Goldsmith is suitably rousing and as described, the action is too. Nonetheless, there's really no great reason to seek this movie out unless you're a Bronson fan - which I am. I really want to give this movie a B but it's really a C. If it's on, leave it on, and if you find the  DVD for a dollar or two it's worth it, but that's about it. 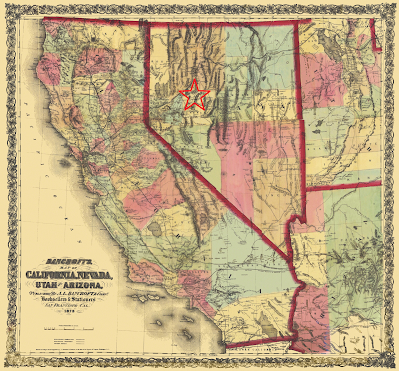 The film's setting, somewhere in the Sierra Nevada Mountains, but outside of Carson City and involving ore from the Comstock Lode, is a little hard to pinpoint. Let's just say it's somewhere in western Nevada. Northern Idaho in the Lewiston area seems an adequate enough stand-in and a better one than happens in many Westerns.