Westerns - It's All About the Cowboys 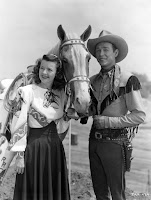 Spurred on by Raphael Ordoñez's film noir reviews, I thought I might try my hand with some similar, but with Western movies. Unlike noir, which is bound together by an attitude and style, the only things a Western needs to qualify as such is to be set during a time of open frontiers (or while in the process of closing). Most Western films take place after the US Civil War, before the Great War, and west of the Mississippi River (and still with plenty of room for variants by locale and even time period). After that, all bets are off.


By which I mean, Westerns aren't bound by anything else. It really just comes down to cowboys (and Indians, lots of times). Roy Roger's singing cowboy flicks count just as much as Monte Hellman's low-budget revisionist ones. That's a little glib, but seriously, for me, boiled down to basics, Westerns are all about the cowboys.

From the earliest days of film making to today, there have been Westerns. Wikipedia says the first one is Edwin Porter's 12-minute long The Great Train Robbery. While not the industry behemoth they were in the forties and fifties, after a dearth of them in the eighties, they've made a substantial comeback.

There was a spate of Louis L'Amour tv-movies featuring Tom Selleck among others, and I can't speak for them, never having seen any, but that was pretty much it for that decade. Okay, so there was Silverado too, but I never liked that one, so I try my best to forget it.

Over the past few years there've been a fair number of good or at lest significant Westerns. While often described as revisionist, Andrew Domink's The Assassination of Jesse James by the Coward Robert Forward is a very good, almost reverent, invocation of many classic Westerns.  Quentin Tarantino's last two movies, Django Unchained and The Hateful Eight, were both Westerns, more revisionist than classic by all accounts, but still seemingly respectful (I haven't seen either one yet, but folks seem to like them). Those other genre-dabblers, the Cohen Brothers, were bold enough to revisit the Charles Portis novel, True Grit. S. Craig Zahler's 2015 Bone Tomahawk, one of the most unsettling horror movies I've ever watched, proves how far a movie can range from one of John Ford's epics and still without any doubt be called a Western. For genre fans, it's been a pretty grand time.

So, it's not just cowboys that make a Western a Western. There are a few other things to note that cut across much of the genre.

The frontier setting, allows these films to strip away the complications of civilization, and let a man face off against high odds, be it other men or the elements. Even many of the lighter ones are about some lone hero facing off against a dastardly gang of rustlers or a criminally minded rancher looking to take over the whole county. The same itch for bravery and adventure scratched by swords & sorcery is satisfied by Westerns.

Many stories examine that point when civilization reaches the frontier. Sometimes it's an elegiac look at a lost time of freedom, others, a time when violence is supplanted by law and justice.

More than any other genre, Westerns are movies of the natural world. Sometimes it's just there, making even mundane scenes look beautiful. Whatever else you remember about John Ford's movies, you will never forget the shots of Monument Valley. Other times  it's integral to the film's atmosphere. Whether it's the Grand Tetons rising up in nearly every outdoor shot in Shane undescoring the precariousness of the farmers situation, or the barren Andalusian countryside in the Man With No Name trilogy depicting a landscape that seems to have been poisoned by corruption and cynicism.

But the cowboy thing is important. To the casual watcher, it's the one consistent thing, linking John Wayne to Gene Autry to Clint Eastwood. There's the whole panoply of the cowboy: six-guns, Stetsons, horses, jingling stirrups, all those things.  The cowboy (or gunslinger), is one of the most iconic looks in the world. Some folks use it as an description of American over aggressiveness in foreign affairs, but most people see the cowboy as a model of independence and boldness.

I don't know when I saw my first Western. I was definitely very young and probably saw it with my dad, a bigger fan than even I am. All I know, is from an early age, my friends and I always had Colt pistol and holster sets. One year, I even got a rawhide vest, chaps, and cowboy hat for Christmas. I just thought the look was cool and I still do.

I love Westerns, whether traditional John Ford ones or bonkers Sergio Corbucci ones. I particularly love that all sorts of stories can qualify as a Western. It's the sort of genre that encompasses all sorts of genres. They can be epic like The Big Country (1958), romantic like Shane, or even horror like Bone Tomahawk. They're big enough for heroes, rogues, and villains to star as the protagonists - just look at The Good, the Bad, and the Ugly (1966). Without having to be twisted out of shape, they can be transported to other frontiers and lawless zones - Quigley Down Under (1990) and Nick Cave's grimy The Proposition (2005) move the genre to Australia effortlessly.

I've tried to think of my ten favorite Westerns and it turned out to be a fool's errand. I've seen and loved too many to have only ten.  Besides, it varies from day to day. I might be Peckinpah mood one month and a Leone or Ford another. Maybe I'm itching for more comic movies like Burt Kennedy's James Garner-starring Support Your Local Sheriff (1969) and Support Your Local Gunfighter (1971).

I've been watching a lot of Westerns, so I figured I might as well write 'em up as well. It gives me an excuse to finally put on a couple of low budget Spaghetti Westerns I've picked up over the years, but never watched, and dig out Lonesome Dove (1989) (the greatest Western ever made).

Saddle up and ride along with me. I suspect a fair number of regulars hereabout have watched more than a few of the films I'll write about. Heck, I'm hoping there're some I've missed you can hip me to along the way.

I'll start out this coming week with Howard Hawks' Red River (1948), starring John Wayne in old man makeup and Montgomery Clift in one of his earliest roles. It's a searing journey into the heart of father-(adopted) son hatred marred by a sappy ending and blessed with this "What in the Wide, Wide, World of Sports?" moments, a weirdly homoerotic scene about guns.