Shiny Horror Covers From My Youth

The mid-seventies saw the birth of the big horror novel. There had always been novels, - see Conjure Wife, The Haunting of Hill House, and Rosemary's Baby - but short stories seem to have been the heart of horror.

Stephen King changed all that. His first published book, Carrie, sold a million paperback copies. After that, publishing being publishing, looked to replicate that success. Anne Rice, Peter Straub, Dean Koontz all spring from that era.

What brings me here today are the covers. These are the books that I loved when I first read them thirty-odd years ago and have held up to repeated rereadings. And they're shiny. 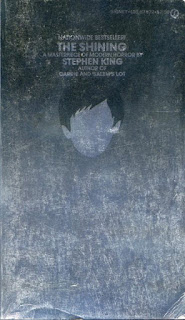 I first learned of this from a radio ad, probably on WNBC AM. It spooked the heck out of me, but when I saw my aunt's copy I grabbed it. And it grabbed me. The book, I'd argue, is perfect, without a wasted word. Whether King or an editor did it, this book has had every useless bit pared away, leaving a tragic story of a man broken and descending into madness.  I loathe the movie, not because of its lack of allegiance to the text, but because, like most of Kubrick's films, I find it static. Nicholson's Torrance holds no nuance or mystery. He's nuts from the start. It's not a question of will he hurt his family but when. 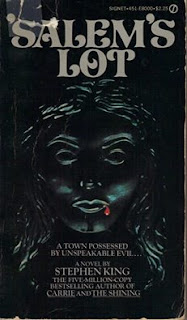 In ninth grade, my friends Gordon R. and Danny F. both told me to read this. I read it the first time listening to Black Sabbath and it scared the crap out of me. It's still my favorite vampire story. Later, the same year, my friends told me to read The Stand - which, after the plague's outbreak, bored me to tears. NOTE: Not only is the cover shiny, it's 3-D. Do they still make embossed covers?

This is another case of hating the movie. CBS made a two-part miniseries starring David Soul, James Mason, Bonnie Bedelia, and Lance Kerwin. I hated the way they made Barlow, the vampire, look and I hated that they left a few of my favorite bits out. Rewatching it, it's not so bad. 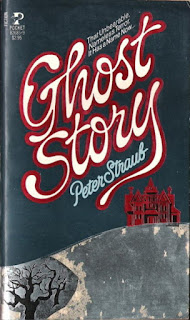 My friend Alex R. turned me on to this book, freshman year too. His English teacher had recommended it to him. I thank them both to this day. Having just read a pretty dismissive old review in the AV Club, I think it's time for a reread.

A movie was made of it, starring Fred Astaire, John Houseman, Melvyn Douglas, and Douglas Fairbanks Jr.. It stinks to high heaven. 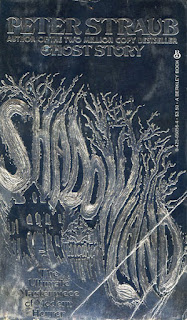 I grabbed this at the late Barrett Book Trader because I had just finished Ghost Story and wanted more. It's not really a horror novel, but a fantasy novel. It was nominated for the World Fantasy Award in 1981. Two boys spend the summer with a magician and come to realize they're learning real magic. Another book to reread, I think.
Posted by The Wasp at 12:21 AM