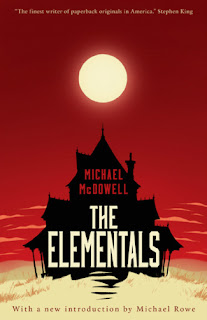 I've seen the name Michael McDowell kicking around the horror stacks of used book stores forever, but until the other day had never read anything by him. Based on its very cool cover and how good several persuasive reviews made it sound, I bought The Elementals. It's very good and I heartily recommend it.


The Savages are one of the oldest and richest families in Mobile. Each year they summer at Beldame, a Victorian home they built on a nearly inaccessible beach at the bottom of Mobile Bay. There are two other identical houses there: one owned by the family of Dauphin Savage's wife, and a third, seemingly empty and abandoned for years. This being a Southern Gothic haunted house story, it's not abandoned. Not at all.

The nature of the evil is elusive and chimerical. Those most familiar with it are unsure of its true nature. What they are know, though, is it is vicious and able to draw on its victims greatest fears and desires in shaping its attacks. McDowell introduces this element with such subtlety it's easy to wonder if it's even there at all. Only slowly does it creep into the real world, which itself is very oppressive and disturbing. So much so it doesn't seem like there's room for the supernatural, but the evil in the third house is real.

The first sign that something isn't right with the house is that it is slowly being subsumed by sand. While the other two houses remain clear, sand has started to pile up against the third house, rising in places as high as the windows. What starts as a simple sense of uneasiness grows slowly into an understanding that things are very wrong to outright terror.

McDowell said, "I am a commercial writer and I'm proud of that. I am writing things to be put in the bookstore next month. I think it is a mistake to try to write for the ages." That may be true, and I've only read a single book of his, but he writes with far more skill than the average spinner-rack horror novel I grew up in the eighties.

The Savage and McCray families pulse with life, even as they suffocate under the murderous heat of summer at Beldame. There are disturbing family mysteries and pitiable human failings scattered all over the The Elementals. As the heat beats down the characters, sapping them of all energy, their conversations become languid, thick with fear and dark memories. All this feels so painfully real, it's startling how well McDowell introduces and weaves in the taint from the third house.

This is one of those books people say is written better than it needs to be. I said that myself on Facebook the other, but really, that's condescending - both to the genre and to McDowell. For me, if horror is to really work, if it's to unsettle, even scare me, not just by relying on Grand Guignol gore, it needs a setting and characters that seem real. McDowell does very well in The Elementals. If you have a taste for haunted house stories, this is one of the best I've read in a long time.

Finishing off The Elementals, I started thinking about my favorite horror novels. Here's some of my favorites. While I know in this deplorably secular age, it's common to see thrillers like Red Dragon or Psycho on best horror novel lists, you won't see them on mine. I appreciate the frisson from those works as much as anyone else, but for me, horror must include at least he possibility of the supernatural and create an atmosphere of wrongess in the Universe. Serial killers are too common, unfortunately, to do that for me.

The Haunting of Hill House by Shirley Jackson
The best haunted house story of them all. Is Eleanor being haunted or is she simply an unreliable, mentally disturbed narrator spiraling toward a breakdown? I won't tell.

Ghost Story by Peter Straub
It's been a while since I've read this and it's probably due a reread. It was inspired in part by Arthur Machen's The Great God Pan and it's filled with nods to classic ghost tales. It's a big eighties horror that doesn't disappoint. What is the worst thing the members of the Chowder Society did and who was Eva Galli?

The Other by Thomas Tryon
I saw the very creepy movie based on it first, late at night, by myself, and without the slightest clue of what I was in for. It's one of my favorite movies, any genre. Good twin, evil twin, summer in rural Connecticut, circa 1930, but so much more as well. I won't say much more about the plot. It's the work of a master magician, always distracting you with one hand, pulling off the trick with the other. It was a huge seller in its time, and if it hadn't gotten a snazzy reprint from The New York Review of Books, I would have said it's been forgotten.

'Salem's Lot by Stephen King
Early King is where it's at for me. Some of his later books are more polished (and tell good stories), but I've found that polish sands away too much of the grit and horror. I think I read this after the equally good The Shining, but this was the first horror novel I read where things happened on a big scale and effected scores of people. Each time I've reread it, I've been expecting to find some great flaws in it, and instead I'm just wowed again by the whole thing.

The Shining by Stephen King
As I wrote in the previous post, I first heard about this book from a radio ad. Two actors played Jack and Danny Torrance and it creeped the heck out of me. When I saw my aunt had a it, I asked her to borrow it and she didn't bat an eye. I was probably 12, but I'd already read the novelization of The Omen, and had started reading Lovecraft. That doesn't mean it didn't scare me, it definitely did, but I was prepared for it. Nonetheless, it sure did work my youthful little fear centers over. When I've reread it as an adult, I still appreciate the fright aspects of the book, but I also zero in on the tragedy of Jack's fall.

In many ways, it's the perfect King book. Whether by his hands or an editor's, The Shining is stripped down to its bare bones. For most of the book, there's only the Overlook Hotel and the Torrances. There are no real side plots (except Dick Halloran's rescue mission), just the hotel versus the family. It's lean storytelling with a sharp eye for human failings.

There's plenty more spooky novels I like, but it's the ones above that I've gone back to several times apiece over the years. Still, here're a few more spooktastic (there, I said it!) books for the season.

Jumping first to mind is T.E.D. Klein's The Ceremonies, like Ghost Story, is spun from the threads of a Arthur Machen story - this time, "The White People." Basically, an academic rents a cabin from some Mennonite types and gets a front row seat for the end of the world. The book came out in 1984 and that's pretty much it from Klein.

Proving I'm not always gore-shy, I really like Richard Laymon's early novel, The Woods Are Dark. It is about as disturbing a bloodfeast as imaginable. It's got all of its creator's touchstones: hyperviolence, freaky mutnat monsters, sexual creepiness, and a kickass girl. Because he worked those things to death, his books bored me after a while, but this and a few others are real monsters.


If I scoured my brain longer, I might come up with more, but this is what I got right now. As I said, it's in short stories that horror best flourishes. So next time, folks, it'll be the anthologies and collections that I keep dipping into time and time again when I need a good frightmare (rimshot!).