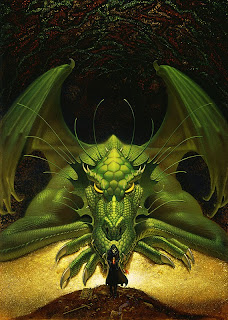 Sometime in 1982 or 1983 my dad, source of so much of my early fantasy and sci-fi reading, picked up a copy of Orson Scott Card's anthology Dragons of Darkness. There are stories between its covers that might be so amazing that they could change my take on fantasy fiction forever.  I don't know and I don't care. That's because the book's first story is "Filed Teeth" by Glen Cook, the first story I ever read by him, and the story that made me a fan of his for life.

In the first few pages there's adventure and mystery.  A band of soldiers and their employer, Lord Hammer, have just finished a brutal mountain crossing only to find their hoped for rest ruined by the onset of an ice storm. Trudging over the ice the men learn they must march "another eight miles...More if the circle isn't alive."  When I first read that, I was hooked.  Where were they going and what was the circle?

The narrator, Will, describes a wounded comrade as an old man who should "spend the winters telling the grandkids lies about the El Murid, Civil and Great Eastern Wars". Who was El Murid? What were those wars? From that line it seemed Cook was presenting a fillip of a larger tale and I'm a sucker for that.

With no other knowledge than that sentence I also believed Cook knew exactly, in detail, what those wars were.  The line wasn't simply a bit of chrome to flesh out a scene but a reference to great events of which "Filed Teeth" was some sort of addendum.

I was also grabbed by Cook's complete avoidance of any sort of olde tymie dialogue. His characters speak in simple, contemporary English. When Lord Hammer's aide, Fetch addresses the soldiers, it starts like this:


"Hey!  Listen up!. Fetch yelled. "Hey!  I said knock off the tongue music. Got a little proclamation from the boss." "Here it comes.  All-time ass chewing for doing stupid," I said".

Simple lines like that were revelation after Tolkien and, particularly, his copycats. Cook wasn't the first author to write fantasy like that, but his stories were the first place I sat up and took notice of it. Coupled with his grimier and more mundane approach to the genre it struck me as perfect.
By the end of "Filed Teeth", there's been dark and evil forests and a horde of barbarians. Powerful sorceries have been unleashed and mysteries' solutions revealed. Running through it all is a melancholia.  All the men are veterans of the wars mentioned above. Some suffered great losses among friends and family while others found what they believed in undermined and driven into the wilderness. Only later did I learn that's a constant tenor in Cook's stories as men rue the dark things they've done and devastation and betrayals they've witnessed or been subjected to.

"Filed Teeth" sold me on Glen Cook. I was sold specifically on the need to find the Dread Empire books. I remembered that I'd seen all three rubberbanded together at the late Barrett Book Trader here on Staten Island and dismissed them because of the title deeming it a little cheesy. Now I had to have them. Fortunately, no one else had bought them and soon I was devouring A Shadow of All Night Falling, October's Baby and All Darkness Met.

I haven't read all his books and still I've read thirty-one. To this day Glen Cook is one of only a few authors I try to buy in hardcover as soon as his books are released (the others are Tim Powers, James Blaylock and Terry Pratchett).

People can argue about them in comparison to the his next series, The Black Company, all they want. The Dread Empire books are sloppier, less well written, and all manner of things lesser than the Black Company, but they still rock.  For me they hold a special place. The Dread Empire books were grittier and darker than the bulk of the fantasy I had read up to that point. Oh, Moorcock and Wagner got pretty cynical. With Moorcock, though, it often felt like an aesthetic pose. Wagner was probably the closest in sensibilities, but he was writing about an immortal superman. For all their epic adventures, the main characters in the Dread Empire series are mortal and usually driven by mortal desires and fears. Oh, and they are heroes who do noble things, but they have the feet of broken and impure clay.

In his essay, "Shit Happens in the Creation of Story", in Jason Waltz's Writing Fantasy Heroes, Cook mentions a specific event from the Dread Empire books as an example of the power of story to overwhelm events and characters no matter what the author's intentions. That event, and if you've read them you know what I mean, is still a kick in the gut all these years later.

Cook was one of the first writers I read for whom no character, no matter how cool or beloved, was sacred.  Anything could happen to anybody at anytime and it did. Unlike many of the dark stuff being written today, it never felt forced or gratuitous. Bad things didn't just happen to remind the reader the world's an unforgiving, pointless crap heap.  Events happened because they flowed naturally from the story.

As a story, "Filed Teeth" is dynamite. The mystery of Lord Hammer and that of his destination are revealed slowly and skillfully. If you've read the Dread Empire series it's not much of a riddle, but as my introduction to Cook's world, I was as intrigued as the narrator. Set in a forbidding land beyond civilization. and crossed with evil magics, lost cities and the dragon to end all dragons, it's also a spectacularly exciting story for one so suffused with the feeling that legendary times coming to an end.

Between the Dread Empire and the Black Company series, Glen Cook, I believe, is one of the earliest writers of military fantasy. I find his terse style and shorter books more enjoyable than the giant tomes larded with endless, trivial side plots, visited on us by lots of authors these days (I know, I ride this hobby horse a lot, but c'mon, admit it, too many books are just too long). I'm so grateful to my dad for buying Dragons of Light all those years ago and I'm incredibly grateful to Glen Cook for writing scads of tough, unsentimental fantasy books.
Posted by The Wasp at 10:20 PM