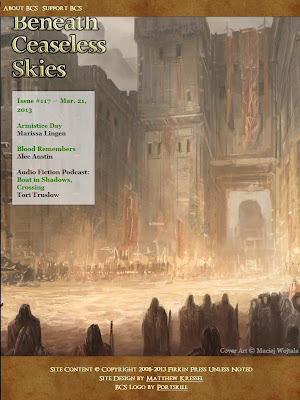 The issue-opener, "Armistice Day" by Marissa Lingen, is an examination of the effects of relying on magical forces to settle a war.  To prevent their opponents' victory over them, a nation's sorcerers conjured an army of creatures described as "little squashed mustardy yellow people" out of nothing.  Created as warriors, the nation is faced with the question of what to do with them when there's no longer a use for their martial or magical skills.
"Armistice Day" is narrated by the sergeant of a unit of conjured soldiers relegated to working in the kitchens of a university of wizardry.  The supposition is that their skills with knives can easily be converted from carving men to carving vegetables.
I'm a sucker for stories that take an old stock fantasy image and then try to examine it in a novel fashion.  When it succeeds, especially as well as it does here, I'm even happier.
Issue #117's second story is "Blood Remembers" by Alec Austin.  Unlike the low key nature of "Armistice Day", this story's a great, big expansive one set amidst religious schism, a heretical crusade and betrayal.
There's a whole lot going on in Austin's story and he just throws the reader into things with not a lot of explanation.  I don't want to give much away too much as there are some striking images that deserve to be experienced without my interference.
Broadly, Anton Carcania is leading an army against the book burning forces of the anti-pope Immaculate.  In the course of the story we learn Anton was once on the wrong end of a crusade and memories of that horror still move him.
Following betrayal by his major ally (I'm not really giving anything away), Anton initiates a plan of monstrous magnitude.  While the events of "Blood Remembers" were inspired by the Albigensian Crusade, and Austin's world has strong similarities to Medieval Europe, there's so much more to it than any simple parallels.
So that's that.  Go look at Mr. Wojtala's pretty picture and read a couple of good stories.  I really hope BCS is meeting the expectations of its staff.  Something this consistently good deserves to be noticed and read.
Posted by The Wasp at 6:26 PM