A Crapsack Universe - "The White Isle" by Darrell Schweitzer 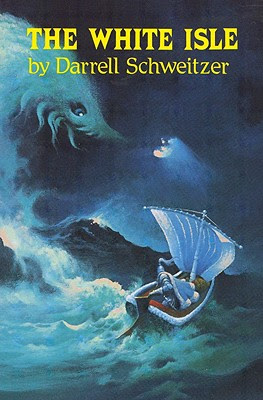 A crapsack universe, according to tvtropes.org, is one where all that can go wrong does or survival is difficult and existence a constant misery.  The universe of Darrell Schweitzer's first novel (written in 1976 and published in 1989), "The White Isle", is worse.  According to a 2003 interview Schweitzer did with G.W. Thomas, the story is "a 23-year-old's attempt to write tragedy.  The basic premise is this "what if Fate and the Gods really have screwed us over?  Life's a bitch, and then you die.  The afterlife is worse.  There is no right and wrong.  Everyone goes to Hell."
Deliberately reminiscent at times of Clark Ashton Smith's dark and cynical fantasy stories, "The White Isle" opens words of dread:


"Hear me!
Hear now, O Lords and Ladies, the tale of
Evnos and Riancinera, and the doom of
the House of Iankoros.
Hear me!"


"The White Isle" is the tale of Prince Evnos of Iankoros and his quest to recover his wife, Riancinera, from the Underearth and free her from bondage to Rannon, god of death.  Casting aside the warnings of his tutor, the wizard Theremderis, and the dismissive words of a demon he summons to learn the way into the Underearth, Evnos sets out alone on his quest.  A powerful sorcerer, the prince is able to make his way into the death god's kingdom and smart enough to navigate around or overcome all the obstacles that stand between him and Riancinera. 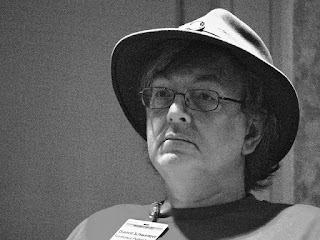 It is at the point of Evnos' entry into the Underearth that  "The White Isle" becomes the story described in the interview referenced above.  Without  giving anything away about the terrifying imagery Schweitzer's conjured up, Evnos discovers the afterlife is unremitting pain and sadism.  There is no hope, all are damned and none are saved.  It's as inventively cruel and painful as Michael Shea's Hell in the Nifft stories but bereft of even black humor.


Evnos' early life, his education and marriage then his quest to rescue his wife only makes up about the first half of the book.  The second half is best seen as Schweitzer described it in the same G. W. Thomas interview; an epilogue.  It tells of the years following Evnos' raid on Rannon's kingdom and the horrible prices he found he had to pay.
The core of "The White Isle", Evnos' journey to the Underearth, is based on a theme at least as old as that of Orpheus and Eurydice (which Schweitzer points to in the Thomas interview).  In its telling the story often sounds equally ancient.  There are moments that would not seem out of place if we were told they came from ancient Mesopotamia.  One of the most myth-like moments occurs when Evnos is surrounded by demon-soldiers of Rannon.  He distracts, then overcomes them with fruit (an element Schweitzer admits to swiping from a Japanese Orpheus-type story).

"Then he remembered the bag of fruit he was carrying and what it was for.  He reached in and threw apples on the ground.
"Here, brave ones!  The gifts of the earth!
At once the creatures fell to fighting among themselves over the fruit for they craved it.  Over the centuries, as Glazdiri had explained, the tormented had a way of revenging themselves on their jailers by describing to them in endless, exquisite detail the pleasures of the upper world, which Rannon's creatures of course would never know."

An atmosphere like ancient legends may suffuse "The White Isle", but its utter and unavoidable hopelessness makes the novel feel modern.  This book extends far beyond nihilism.  Only at the book's very end, when a creation story is presented, is there any hint of some possible escape due to the existence of something outside of and greater than Rannon.  Even that, though, is not assured.  This is one of the bleakest fantasy books I've ever read and I've read R. Scott Bakker.
Still, this is not a book to be missed.  If  the success of "The White Isle" should only be judged by how well it succeeded at achieving the task its author set himself then it's a near perfect one, but there are several other good reasons to read it.  Schweitzer created a sympathetic character in Evnos and as he grows and matures the reader becomes attached to him.  When he's hurt learning magic or by the death of his wife, we feel it.  We want his quest to succeed nearly as urgently as Evnos does.  His determination is something to behold.  Like him we are horrified at the reality of the world laid bare.  It's also a book of inventive world construction and exciting storytelling.
I haven't read much Schweitzer but if this is a reasonable sample of his wares I'm ready to try more.
Posted by The Wasp at 11:34 PM