"Ki Khanga" by Davis and Ojetade 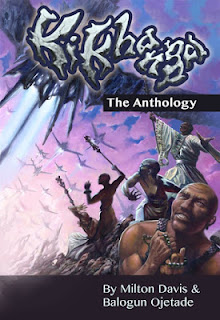 The latest blast of swords & soul to end up on my kindles is "Ki Khanga: The Anthology" by Milton Davis and Balogun Ojetade.  Last year, Davis announced that he and Ojedate were working on an African-derived RPG.  At some point, he wrote, an anthology exploring each of the regions of the world of Ki Khanga would be released early this year.  It would serve as an introduction to the game as well as a source of financing.  When Ojedate announced on January 19th it was available, I downloaded it immediately.
Ojedate has written at length about role-playing, including the racism he encountered back when he first played D&D.  Later, as a ref, he took on the boredom caused by endless pseudo-European campaigns by introducing pseudo-African characters and settings and, lo and behold, it helped eliminate the torpor that had settled over his gaming.  Players were excited at the prospect of something new and different.
Both these men are entrepreneurs and swords & soul promoters as well as writers. Now they're hoping to build on what they and other writers have done and continue expanding the audience for the genre and the horizons of those reading it.  The world of Ki Khanga will be one more step forward. 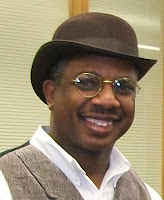 So how's the book?  Well, it's excellent at times, but it's a bit of a mixed bag.  I suspect that's due to it's serving as an RPG supplement as well as a collection.  It opens (following a nice forward by Charles Saunders)  with a history of Ki Khanga.  Of special importance, we learn of the Cleave, a great inlet in the continent of Ki Khanga, supposedly caused by the Creator's axe at his dismay of the nature of the world's inhabitants.  Now, unpleasant, seemingly evil things emerge from the Cleave to pursue unknown goals.

The first stories, "Nubia's Revenge" and "How Adjoa Became King", are little more than character introductions, providing peeks at the greater world and events.  We meet a warrior who learns revenge isn't all she needs to be capable of and a royal daughter who becomes king.  A later story, "The Signal", again is a little thin, but it does introduce the almost majestic terror of another enemy of Ki Khanga, the mysterious joka watu.  If you read them as background material for the RPG they're more successful than as stories. 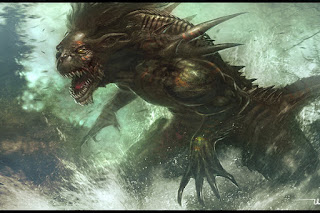 With each new story, a little more is revealed about the world of Ki Khanga and the forces at work across the land.  In Davis' "Old Hunter", things get ratcheted up a notch and the enormity of the magical forces in the Cleave is revealed.  "The Hand of Sa-Seti" by Ojedate introduces intelligent, gun-toting elephants and giant beetle monsters from the Cleave.   "Old Hunter" has a potent, mythic feel while there's a nice steampunk bit of business going on in "Sa-Seti". This is great, action packed S&S.
It's with Davis' "Timneet" that the book hits it stride.  Two men are sent by their Temple by their master, the Teacher, to kill his enemy in the town of Sala.  In the end it reads like the opening to a much longer tale, but that's not a failing.  Most of the story is composed of conversation between and contemplation by the two would-be killers.  Even though the surprises are very surprising, Davis' character had me caught up in their story from the very start.  I need to know what happens next.
There are several other solid stories.  "A Name Long Forgotten" is about a a witch and her promised revenge.  "Fearless" is about a brave prince unable to see the source of his foretold doom and reads like a fairy-tale.  Both are by Ojedate.
"Ki Khanga"'s best moments are the last three stories; "The Bene's Daughter" and "Simple Math" by Davis and "The Deal" by Ojedate.  Longer than most of the earlier stories, each provides enough room for the authors' to stretch out and deliver more complex characters and more excitement.  "The Bene's Daughter" is about the hidden and unknowing daughter of a potent magical family from a race dedicated to defending Ki Khanga from the Cleave's inhabitants.  In "The Deal", there's a wizard who travels underground inside a dead, giant worm, a warrior covered with animate and deadly tattoos, and we learn a little more about the division between magic and the divine first glimpsed in "How Adjoa Became King".  While both only introduce us to their heroes, they work as solid, standalone stories much better than "Nubia" and "Adjoa".

The book's finale, "Simple Math" introduces the best character in the collection, Omari Ket.  Omari's a member of the Mikijen, a force of professional mercenaries.  It's a long, episodic story, but doesn't feel like a series of adventures simply strung together.  Each section leading logically to the next with enjoyable escalating scale of adventure and danger at each step.  There's a naive young mercenary from the back country, an upstart merchant backed by renegade mercenaries and the Ndoko, ape-men warriors.  Just the sorts of bits and pieces that make good S&S.
Omari is a skilled warrior, loved or lusted after by almost every woman he meets, and almost gleeful cynical.  His attempts to tutor the naive Zewani are great.  Unbeknownst to him, he's been marked by the goddess Odu for a greater purpose than roaming through life whoring and fighting.  Throughout the story he finds himself pushed more and more in ways he doesn't appreciate but finds irresistible.  I'm definitely waiting for what he does and where he goes next. 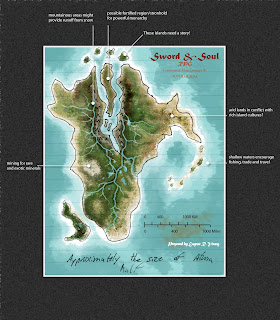 "Ki Khanga: The Anthology" is a lot of fun.  I've read Milton Davis' stories before and I'm a fan.  I'd only read Balogun Ojedate's excellent blog prior to this , but I wasn't surprised to like his storytelling.  By the time the book's done you really have a feel for the world of Ki Khanga and some of its heroes and heroines.  If you want more detail about the world, its realms and people, check out Davis' site and the Ki Khanga entries.
So should you buy it?  Of course you should, the e-book's only $3.99 and you're helping back the RPG.  You should really buy it because the last three stories alone are worth the price.  One of the points of the whole swords & soul movement is to widen the palette for creating swords and sorcery.  Books like "Ki Khanga" are doing just that.  It's not a perfect book (those early stories that leave the reader hanging and more typos than I'm used to are weaknesses), but there's so much great yarn spinning going on you shouldn't give it a pass.