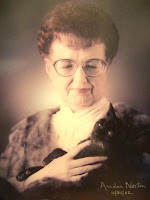 "I am Elys. If my brother said aught of me, you also know that I shared his upbringing in part. Sword and shield-work I learned even as he did in his childhood. Though when we were grown we went separate ways. However, there was a bond between us, and when I was warned that he was in peril, I came, even as he would have come had he heard I walked into danger."
"But -- but how did you know he was gone -- lost in the hills? No messenger has ridden from here. We have kept it secret lest worse happen if it were known."
Brunissende watched me now with the same side-look I had seen in other women.


from "Dragon Scale Silver"
Posted by The Wasp at 8:43 PM