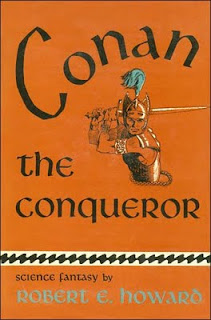 So, you may ask yourself, what does this presumptuous blogger think any new fan of this swords & sorcery stuff should read to get a taste for the best it has to offer?  What does he think form the foundations of today's heroic fantasy books and shorts stories?  Those are fair questions and I'll endeavor to answer them in as helpful a manner as I can.
Robert E. Howard - he's really the fountain of this crazy genre.  His tales of Conan and Kull took the world building and fantastic elements of writers like William Morris, Lord Dunsany and E R Eddison, mixed them with the violent, brooding heroism of the old Norse and Celtic myths and legends as well as the color and exoticism of historical adventure fiction of writers like Talbot Mundy and Harold Lamb and  the wildness and roughness of his own Texas, and took this concoction to new and different places from where its elements had come.
With the creation of King Kull and Conan Howard pretty much created this whole swords and sorcery thing.  I think some of his stories with these two still stand as the apotheosis of the genre.  His stuff is good.  Maybe he never wrote a six ton epic fantasy doorstopper series, but I have reread his stories many times and I will reread them many times in the future.  There's a short,
There are only twenty Robert E. Howard Conan stories, one novel and four fragments.  Everything else is either pastiche, varying in quality from abysmal to not too bad, or finished by other hands and there's nothing really good to be sad about that.  There are some that started as historical tales and were converted by other hands for Conan's supposed benefit but not, alas, for we readers. 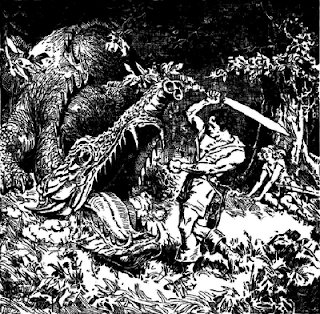 Sadly there's even less original Kull material.  Howard only published three stories while alive and left nine and poem behind after his death.  For whatever reason (and I suspect the Shield Wall folks over at the Robert E. Howard United Press Association can give you that info) he escaped the worst depredations of overeager posthumous collaborators and publishers.
I've already mentioned that my favorite Conan tales are "Beyond the Black River" and  "Red Nails".  I think they stand as the height of Howard's art and storytelling.  They provide vivid illustrations of his views on civilization and barbarism.  The first depicts the meeting of the utterly barbaric with the much more civilized.  The second presents us with civilization gone utterly to seed into deepest decadence.
They are not just platforms for Howard's ideas about human society, they are exciting stories filled with action, swinging swords and monstrous foes.  The man could tell a tale that keeps the reader on edge the whole time.  There are steady swells that build to an overwhelming wave that threatens to engulf you.
Both stories give Conan a chance to display his martial power as well as his sharp ability to study and understand his foes and the greater situation at hand.  Still while no monosyllabic brute he's not a man off civilization.  He moves with the implacability of a bear and the intelligence of a wolf but in both cases remains a wild creature.
They are among the last Conan stories written and there's a sense that Howard might have finished what he had to say about the character.  He did write to Lovecraft that he saw his future writing to be in the field of westerns.  Who knows what he really might have done but ending Conan's tales here would have been satisfying.
After these two stories, I would read about the earlier exploits of Conan in "The Tower of the Elephant", "Rogues in the House", and "The God in the Bowl".  All feature a lither Conan making his way as he can by stealing or sword wielding through civilization.  All the rest, as well as Howard's sole novel, "The Hour of the Dragon", are worth reading, as if we're to be serious here and you want to visit the roots of the genre you should be reading them all.  But start with the ones I've mentioned and you'll be off to a great start. 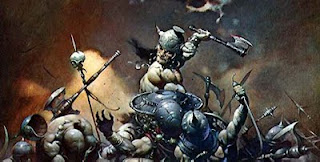 Email ThisBlogThis!Share to TwitterShare to FacebookShare to Pinterest
Labels: best Swords and Sorcery, beyond the black river, conan, God in the Bowl, reading list, red nails, Robert E. Howard, Rogues in the House, Tower of the Elephant