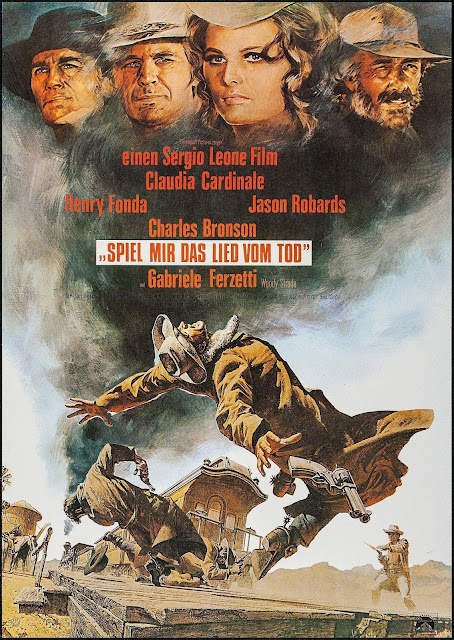 Once Upon a Time in the West (1968)
directed by Sergio Leone
screenplay by Sergio Donati
Sergio Leone
story by Dario Argento
Bernardo Bertolucci
Sergio Leone
I grew up watching Westerns because of my dad. He loved the genre, books, and movies alike. I remember being excited one summer when Channel 5 announced a week of Clint Eastwood Westerns. My mom and sister were going to be away for a week and it meant my dad and I had control of the tv. I definitely remember watching all three of Eastwood's Man With No Name movies directed by Sergio Leone: A Fistful of Dollars, For a Few Dollars More, and The Good, the Bad, and the Ugly. Somehow, I didn't see Once Upon a Time in the West until several years later. In fact, the only reason I saw it when I did was that we had run out of things to rent from the local mom & pop video store. This was back in 1985, the heyday of mom-and-pop video stores. The store we belonged to was a block from our house and my family had run through the store's initial collection in only a few weeks. Eventually, with little else to choose from, my mom brought home Once Upon a Time in the West. The title and the box made it look cheesy, but Henry Fonda, Charles Bronson, and Jason Robards on the cover were enticing. I was not ready for what soon unspooled on my VHS player.
With little dialogue, the opening scene introduces three ominous-looking men, two played by immediately recognizable actors: wall-eyed Western character actor Jack Elam, and Olympian and star of John Ford's Sergeant Rutledge, Woody Strode. After an extended sequence built of numerous small, satisfying moments, a train arrives and Charles Bronson, features made of chiseled red granite, debarks. The ensuing action is sharp and swift and was more than enough to hook me right away. Bronson's character never gets a real name but is called Harmonica by people for the eponymous instrument he wears around his neck and plays from time to time. I love Charles Bronson and grew up on his tough guy movies from the seventies and I know he was a fairly limited actor, but within his limits he could do good work and he does that here. Harmonica's an opaque character, saving the answers to his mysteries for a certain time and place and Bronson's blank, squinting demeanor is perfect for what the role needs. 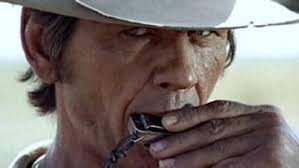 The movie then introduces us to the other major characters in equally powerful scenes. We meet Henry Fonda as Frank, the only completely villainous role I'm aware of him ever playing. It's a brilliant bit of casting against type. Fonda's on-screen persona, going back to his earliest roles, was of a good and noble man, whether in Young Mr. Lincoln, The Grapes of Wrath, or Advise and Consent. He still has the same calm voice and rational demeanor, but he hasn't a single redeemable quality. It's a bold choice, by Leone and Fonda, that I wish more actors would do. 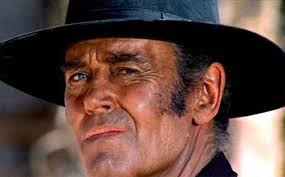 Next, as Jill McBain, there's Claudia Cardinale, a murdered man's bride newly arrived from New Orleans. It's hard to tell how good her acting is - most of the non-American actors are dubbed - but she's absolutely luminous. Later we learn she's a whore with a heart, if not of gold, at least silver. Dubbed or not, she plays it with the right mix of hardness and softness. 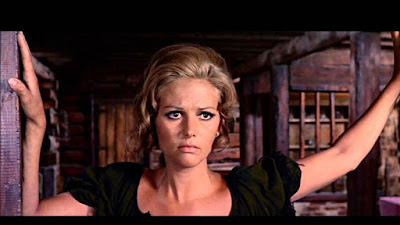 Finally, Jason Robards as Cheyenne, leader of a gang of outlaws, makes his entry, freshly escaped from custody and his hands still shackled. He made his career on the stage in Eugene O'Neil plays, but on film, he played more than a few roguish types. With him, Leone cast exactly to type. The liveliest character in the movie, he's the source of most of Once Upon a Time in the West's humor. 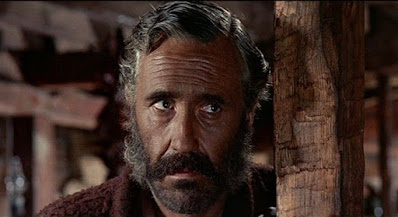 With The Good, the Bad, and the Ugly in 1967, Sergio Leone felt he was finished with making Westerns. What he wanted to do was make a movie out of Harry Grey's autobiography about his days as a Jewish gangster in New York. Eventually, he would, as Once Upon a Time in America, a truly epic film starring James Woods, Robert De Niro, and William Forsythe, but not until 1984 and not without troubles in getting his full version released.
In 1967, Hollywood just wasn't interested. He kept being offered only Westerns and he kept turning them down. Not until Paramount offered him a big production budget and the services of his favorite actor, Henry Fonda, did he say yes. He had Dario Argento and Bernardo Bertolucci join him in drawing up a story. They spent a year watching classics American Westerns, among them The Iron Horse, High Noon, The Comancheros, and The Searchers. The goal was to create a movie that paid homage to those movies and pack it with as many of the best Western movie tropes as possible.

As Leone explained: ‘For this “dance of death”, I wanted to take all the most stereotypical characters from the American Western — on loan! The finest whore from New Orleans; the romantic bandit; the killer who is half-businessman, half-killer, and who wants to get on in the new world of business; the businessman who fancies himself as a gun fighter; the lone avenger. With these five most stereotypical characters from the American Western, I wanted to present a homage to the Western at the same time as showing the mutations which American society was undergoing at that time. So the story was about birth and death. Before they even come on to the scene these stereotypical characters know themselves to be dying in every sense, physically and morally — victims of the new era which was advancing.’ Leone’s ultimate goal was nothing less than a ‘cinematic fresco on the birth of America’.

For a detailed look at the creation, production, and legacy of Once Upon a Time in the West, here's a piece titled: The Making of 'Once Upon a Time in the West'. The movie is equal parts pastiche and original artwork. As much as it stokes the fires of revisionism, it's a tremendous homage to the great films Leone and company loved. Unlike the Man With No Name trilogy, which, as much as I love it, never really feel like it sits properly alongside classic American Westerns, this movie does. The cheap, dirty look of Leone's earlier Westerns had more, I think, to do with finances than intent. The budget for this movie was four times that of his previous Western epic, The Good, the Bad and the Ugly and it shows. Most of Once Upon a Time was still filmed in Spain and Italy, but it just looks better - the shots are better, the sets are better, the costumes are better. The squalidness of the Eastwood movies is absent here, replaced by a glorious, epic look. Added sequences in Monument Valley, the location of many of John Ford's Westerns, add to the film's verisimilitude and help connect it to its inspirations. 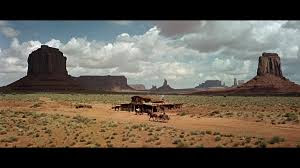 I've seen Once Upon a Time in the West described as slow. That is wrong. It is deliberate, taking time to build its characters, the plot, and show off the land. It is a long movie, but it doesn't drag. There's always something happening, some plot unfolding, some bit of violence. It moves between all four lead characters, building their connections to each other and slowly revealing just what is going on: why did Jill's murdered husband order palettes and palettes of lumber? Why did Frank kill those people? Who is Harmonica?
I need to find longer pieces by Leone, Sergio Corbucci, and some of the other Spaghetti Western directors to learn more about their fascination with Westerns. I've written before about the clear connections between hardboiled crime, sword & sorcery, and Westerns, so I suspect those links are just as valid for Americans as Italians: tough stories of strong men in dangerous settings acting bravely, and often nobly, and bound by personal codes of honor. That's simplistic, but carrying that off perfectly isn't easy. Not every hardboiled movie is The Glass Key or The Maltese Falcon and not every movie is The Searchers....or Once Upon a Time in America.
Rating - A: Despite being a pastiche, Once Upon a Time in the West transcends its fanboyish origins and truly is one of the great Westerns. Yes, the dubbing is occasionally obvious and annoying, yes, it's cobbled together from things we've seen before, but the movie's power - from its cast, from the archetypal Western story and characters, from the visuals - is real. If you see only a single Leone movie, this is the one to see. 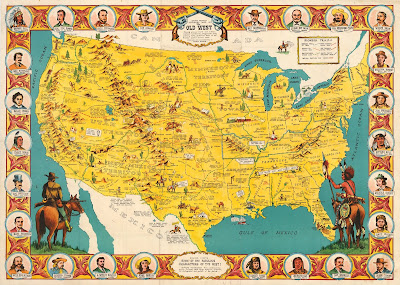 The film's setting - the fictional town of Flagstone - could be anywhere in the explicitly mythical Old West. The real shooting locations - Italy soundstages, the Spanish countryside, and Monument Valley - seem as integral to how I imagine the West to look as does the real American West.

PS: I didn't mention a sword & sorcery movies because they all stink.
Posted by The Wasp at 12:33 AM