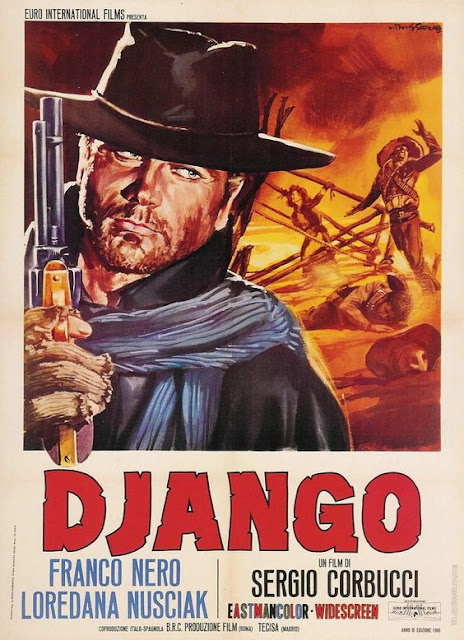 "What did you say?

It doesn't matter. What matters is that you're about to die."

Django responding to a Red Shirt

Django has one of the coolest openings ever:

This is not a great movie (unlike Corbucci's 1968 masterpiece, The Great Silence {which I wrote about here}), but it is packed with some brilliant, lunatic scenes that make it worthwhile viewing.

According to Wikipedia, Sergio Corbucci was filming another movie and was approached by a novice producer in need of a quick hit. Corbucci jumped at the offer and decided to do a loose remake of Akira Kurosawa's 1961 samurai movie, Yojimbo. Sergio Leone had already done that with A Fistful of Dollars (1964) and set Clint Eastwood on the path to superstardom. Corbucci, a more overtly political director had something else in mind.

Where there was no obvious racial animosity between the Mexican and American gangs in Leone's movie, outright racism was going to be at the heart of Corbucci's. Again, in the earlier film, politics are nonexistent. In Django, while superficial at best, they are there and serve to justify the Mexican gangs actions, at least a little.

The movie opens with Django (Franco Nero) appearing out of nowhere and coming across a group of Mexican bandits preparing to whip a woman for the crime of running away from their boss, Hugo (José Bódalo). As the punishment begins, shots ring out and all the Mexicans are killed. A band of Americans, all wearing bright red scarves have suddenly appeared. While they untie the woman, they don't free her, instead they immediately prepare to burn her alive for the crime of miscegenation. That proves too much for Django and he up toward the Americans. Soon, they too lie dead in the mud, and this time, the woman, whom we've learned is named Maria (Loredana Nusciak), is freed.

Eventually the viewer learns that under the command of Major Jackson (Eduardo Fajardo), a band of inveterate racist Confederates have made their way into Mexico where they've been helping the Mexican government against revolutionaries led by Hugo. Jackson is an old enemy of Django and Hugo is an old friend. Soon, Django is killing and plotting, which in turn leads to more killing and more plotting. What's inside that coffin he's been dragging around turns out to be so cool it's probably the one thing everyone who has ever seen the movie remembers.

The movie suffers from a weak, slapdash script. Again, according to Wikipedia, the script was being written and rewritten constantly. In a 2001 article in The Guardian, Nero said, when shooting started, Corbucci had little more than a "scaletta," a synopsis. It tells with slack dialogue and hackneyed motivations. The terrible dubbing doesn't help matters whatsoever. The whole movie has a feeling of having been done on the fly at times. None of these things, though, make it unwatchable, only disappointing considering how much better it might have been.

Despite its flaws, Django still provides a good kick or two to the gut in the best possible ways. I think Corbucci making Major Jackson and his Red Shirts the real villains is similar to what was done with South Africans in Lethal Weapon II (dir. Richard Donner, 1989): blood and murder are made more virtuous by the presence of dastardly racists. Still, racist Americans in a Western in 1966 are pretty-in-your face and on target. By then, the rest of the world was getting a good look at American racist and their fight against black civil rights. I have to believe the despicable Jackson and company captured foreign reaction to that pretty well. I may not normally care what an Italian communist has to say about America, but if the proverbial broken clock can be right twice a day, he can at least once in his career.

Then there's the violence. There's some pretty brutal killings in A Fistful of Dollars and For a Few Dollars More (dir. Leone, 1965), but nothing that quite compares to those in Django. The killing of Jackson's men and the attack on the Mexican Army detachment are industrialized murder on a scale not seen in a many Westerns before. There may not be the gallons of blood Peckinpah would unleash a few years later in The Wild Bunch (1969) (see here), but it's nearly as intense, and done with such vigor and sure handed playing to the audience it's easy to get swept up in it and cheer it on.

Django also looks good. Considered the first part of Corbucci's "Mud and Blood Trilogy" (which also includes The Great Silence and The Specialists (1969)), it's got an exhausted, filthy look that as much as the plot demythologizes - hell, anti-mythologizes - the West. Too many American Westerns look too clean. That was rarely the case with Spaghetti Westerns and Corbucci brings on the muck and mire by the truck loads.

The same ugliness applies to the cast. The whores aren't pretty, most of the men are unshaven and dirty and most are ugly. Major Jackson looks normal, but at least we see how misshapen his soul is right away. Even the youthful and handsome Nero's face is obscured by makeup to age him and whiskers.  Whether only the ugly inhabit the West or the West deforms its inhabitants, it's not a pretty place. Only Maria starts and remains beautiful through the whole movie.

Corbucci's West isn't John Ford's land of mesas and strong-hearted men with noble codes. It's not Boetticher's stripped down and hardboiled West, either. It's a vile place filled with Gothic flourishes and it's full of pulpish goodness and badness. It's an intense place and Django, maybe more than its better made Leone predecessors the herald of the increasing bizarreness of Spaghetti Westerns to come.

Django, censored in the UK, without an official US release until 1972, still became an international hit and made Franco Nero a star. There are more than thirty sequels, only one of which, Django Strikes Again (dir. Ted Archer, aka Nello Rossati, 1987) is official and stars Franco Nero. The name Django was even added to Italian mobster movies because it had been such a hit. Of course, most recently, Quentin Tarantino made Django Unchained (2012), an homage to the original and featuring Nero in a cameo role.

Rating  - B: When I first saw this about twenty-five years ago, I totally loved it. That opening, the big reveal on what's in the coffin, it just hit me as totally cool. Now, I'm more "eh," and I shrug my shoulders. I've seen so many more Spaghetti Westerns that I know just how good they can be (and, again, with The Great Silence, just how good Corbucci could be), that I know it isn't wrong to want more than some shiny-shiny things from them. Nonetheless, those shiny-shiny bits are a lot of fun, and it's always exciting seeing a young star on the make. Franco Nero - even badly dubbed - just looks right and swaggers with the best of them. If you haven't seen Django, watch it, if only to find out what's in Django's coffin.

Django's Historical Location: somewhere along the  US-Mexico border after the Civil War 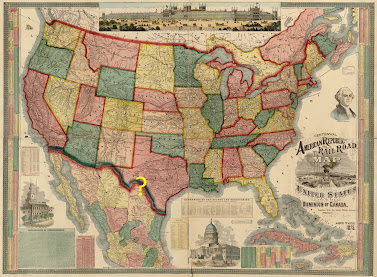 Like so many Westerns, the film's exact location is never made clear and like most Italian Westerns it wasn't filmed anywhere remotely near the real West. Instead, it was filmed in the Tor Caldara nature reserve near Anzio and in a run down Western town on the Elios film set near Rome. If you look up the latter on IMDB you'll see over a dozen different Westerns were shot there.