An Appendix N Read: Burn, Witch, Burn by A. Merritt

A few weeks back I asked for what A. Merritt book should I start out with. The support everybody gave for their favorite title was equally enthusiastic. Finally, I settled on Burn, Witch, Burn (1932) because the Appendix N Book Club podcast made it sound insane. I finished it this past week. If you haven't read it, let me say right here that it is.


Narrated by Dr. Lowell (not his real name, he tells us), spins a tale of madness and terror in New York City that involves medical experts, gangsters, and, of course, a witch. The witch is a terrifying individual, spiritually and physically.

Prepared though I had been for the extraordinary by Walters’ description of the doll-maker, her appearance gave me a distinct shock. Her height, her massiveness, were amplified by the proximity of the dolls and the slender figure of the girl. It was a giantess who regarded me from the doorway—a giantess whose heavy face with its broad, high cheek bones, mustached upper lip and thick mouth produced a suggestion of masculinity grotesquely in contrast with the immense bosom.
I looked into her eyes and forgot all grotesqueness of face and figure. The eyes were enormous, a luminous black, clear, disconcertingly alive. As though they were twin spirits of life, and independent of the body. And from them poured a flood of vitality that sent along my nerves a warm tingle in which there was nothing sinister—or was not then. 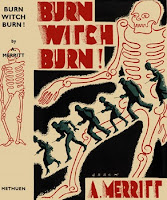 The vile Madame Mandilip, by means evil and unknown, crafts perfect miniature simulacrum of people she intends to kill. These she then animates and sends out to kill their models. It gets even weirder from there.

I read somewhere that Merritt wrote with "lush, florid prose," but that wasn't the case in Burn, Witch Burn. However he may have written his other books, that's not the case here. He writes, yes, with occasional overwrought flourishes, but with precision. His prose rushes the reader along, winging him deeper and deeper into the story's nightmarish events.

With the nighttime arrival of a patient who seems to be suffering from no known malady, accompanied by his mobster boss, Merritt kicks the book off at full speed. With each ensuing chapter, the tension builds and Lowell and his compatriots' fear increases. Gradually, the action moves from crisp and clinical corridors of Lowell's hospital to the druggy, psychedelic chamber of Madame Mandilip, highlighting the fight between reason and unreason. Slowly the curtain obscuring the villain is raised, until we see her in her full, dark horror. Merritt knew how to grab you by the lapels and keep shaking you with increasing ferocity to the very last page.

Serving as a stand in for the reader, Dr. Lowell narrates with an eye to scientific precision. He's the realist among the story's characters, refusing, almost to the end, to believe Madame Mandilip's powers are supernatural. A man of the moder nage, he is unable to accept that sorcery ever existed. Instead, he insists it is no more than natural phenomenon that is yet unexplained.

After the body had been taken away, and as I sat waiting for McCann to return, I tried to orient myself to this phantasmagoria through which, it seemed to me, I had been moving for endless time. I tried to divest my mind of all prejudice, all preconceived ideas of what could and could not be. I began by conceding that this Madame Mandilip might possess some wisdom of which modern science is ignorant. I refused to call it witchcraft or sorcery. The words mean nothing, since they have been applied through the ages to entirely natural phenomena whose causes were not understood by the laity. Not so long ago, for example, the lighting of a match was “witchcraft” to many savage tribes.

No, Madame Mandilip was no “witch,” as Ricori thought her. She was mistress of some unknown science—that was all. 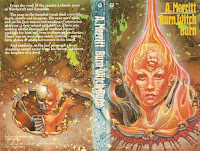 Contrasted with him is Julian Ricori, mob boss and believer in witchcraft; he's also the best of the Burn, Witch, Burn's characters. Merritt has him speak in an odd cadenced way, which I imagine is supposed to imply the cautious precision of a non-native English speaker. I suspect it's meant to be humorous and make Ricori, a notorious criminal, likable. What I like most about Ricori is that whenever Lowell tries to explain away whatever crazy nonsense has just happened, it's the mobster who steps in as the true voice of "reason," insisting that what's going on is supernatural.

Horror novels have a long history. The earliest, such as The Castle of Otranto (1765), The Mysteries of Udolpho (1794), and Frankenstein (1818) are part of the great Gothic wing of horror fiction, and their authors had artistic connections to Romantic movement. There were loads and loads of penny dreadfuls in the decades following those first novels. At some point novels like Strange Case Dr. Jekyll and Mr. Hyde (1885)  and Dracula (1897). At some point, the genre evolved into something


I'm not sure, though, where the modern, slick horror novel got its start. I can't claim Burn, Witch, Burn is the first (Merritt's own Seven Footsteps to Satan was published four years earlier), but it's got to be an early example.  There are none of the Romantic or Gothic trappings of many previous horror novels. It doesn't eliminate atmosphere, but does rely on shock and violence to deliver the frights.

Burn, Witch, Burn is a direct ancestor of the horror novels from the genre mass-market heyday in the seventies and eighties (which remind me, I really must get a copy of Paperbacks from Hell). It's got the same sort of mad, lurid plot, and it's in a contemporary setting. It's visceral and doesn't beat around the bush. It gets to the point - MURDEROUS DEVIL DOLLS! - quickly. It's a good reminder that books don't need to be long and bloated to be effective.

I got some grief when I admitted I'd read nothing by Merritt other than "People of the Pit" (in Jeff and Ann VanderMeer's monumental tome, The Weird). I deserved it. Burn, Witch, Burn isn't the great lost horror novel, but it is a very, very good one. If you haven't read it, it's easiest enough to come by, including for free from Project Gutenberg Australia.
Posted by The Wasp at 10:04 PM