So I'm taking a break from the long 19th century and swords & sorcery and diving into epic high fantasy for a little while. I can't help myself. Rereading The Sword of Shannara sparked a renewed interest in big, sprawling struggles against evil. Right now I'm plunging into Stephen Donaldson's First Chronicles of Thomas Covenant. So far, it's pretty wild.

Remember, big fantasy wasn't alway bad. It only got bad when fans and writers got lazy. The fans where happy with more of the same old dark lords and plucky farm boys crap and the writers were happy enough to provide them. And the publishers discovered that the fans were even happier when the series piled book on top of book.

But there's good, good stuff out in the fields epic high fantasy. Over the next couple of months I'm hoping to work my way through some classic books, a few newer ones, and maybe even a few written as critiques of the genre.


The Lord of the Rings remains my first, and truest love of epic high fantasy. Prof. Tolkien turned me on to thick appendices, detailed maps of fictional realms, and invented languages and histories.

He also elevated fantasy to an operatic scale with a deep moral underpinning, things that weren't especially important to the tales writers like Howard, Smith, and Moore told. Or at least the moral issues were grayer. They wrote darker ambiguous tales that focused on one or two characters with less clear cut relationships to good and evil.

Instead of mighty thewed warriors or cagey wizards, in LotR Tolkien threw small, average men (well, hobbits) into the struggle against utter darkness. Part of the purpose of that was to depict the need for everyone to confront evil. Another was to illustrate the costs such a conflict imposes on even the victors.

Like the great body of myths that underlay German culture, Tolkien wanted to create something similar for the English. To do this he famously developed entire languages and a history that covers thousands upon thousands of years. In The Silmarillion he wrote stories akin to Beowulf and Sigfried and the wars between the Icelandic eddas. These stories would be the deep history that set the stage for the War of the Ring.

I have a great love for history and I'm sure the faux history of LotR is a big part of what made it so appealing. Discovering the appendices when I finished The Return of the King was like finding a diamond at the bottom of a gold mine. It contained just enough about great and terrible events to conjure potent images in my head: the War of Dwarves and Orcs fought in the dark tunnels below the Misty Mountains, Ar-Pharazôn's rebellion against the Valar for example. It was easy to, and I did, lose oneself in LotR.

All those things are good and great, but it's the struggle between good and evil that effects me the most. As many people effect a supposedly worldly cynicism and talk about how there's no such thing as clear cut good and evil, most of them don't really believe it. In the 20th century humanity got a good view of what evil of the blackest: witness Stalinism, Hitlerism, Maoism, etc. (Hell, talk about evil dark lords. They really do exist)

Sometimes the forces arrayed against villainy aren't pure and noble, but they still fight. I'm all for bringing nuance into fantasy but to posit, as some authors seem to be doing, that the whole world is really only gray, strikes me as simpleminded. There is indeed evil in the world and I enjoy stories about the fight against it. In these malignant times, when women are enslaved, men routinely beheaded, and millions driven from their homes, I think we're well served to be reminded that such forces can be fought and defeated.

All of that goes into my definition of high fantasy, a term coined by Lloyd Alexander in an essay titled "High Fantasy and Heroic Romance." It is set in an imaginary world and there is at its heart a struggle against the forces of evil that are set to overwhelm it. Right now, investigating some of the genre's works I have read as well as some I haven't yet is what interests me right now.


It's a genre that's taken hits over the past decade. It's been criticized for reducing the world to a simply Manichean struggle, racism when it creates "evil" races liked orcs, endlessly reusing now-tattered props like the simple hero, wise sorcerer, and dark lord. There's some truth to all these claims. Often, though, the failures came from the pens of authors who picked up the trappings of LotR but neglected to look at its deeper themes and construction.

Even today, when the genre has supposedly passed by such stories of good vs. evil told on a massive scale, its impact is still evident. In a 2009 essay, Richard K. Morgan disparaged Tolkien claiming his heroes were "Irritatingly Radiant Good" and his villains "Towering Archetypal Evil." So when I read his novel, The Steel Remains, I was more than surprised at the essential heroism and willingness to fight evil of his trio of heroes and the blithely evil villains. No doubt he thought by making his characters cynical and brooding he was somehow bettering Tolkien but there's still no doubting they're the good guys.

George R. R. Martin has made clear he is a fan of Tolkien and wanted to combine big fantasy with what he sees as more realism. R. Scott Bakker's bleak (by which I mean like the blackest night when the stars, moon, and sun have all been snuffed out) Second Apocalypse series is heavily influenced by LotR, including its own versions of orcs, dragons, and trolls (sranc, wracu, and bashrags if you care to know), and has a map that looks like it might have come from the pen of JRRT himself. 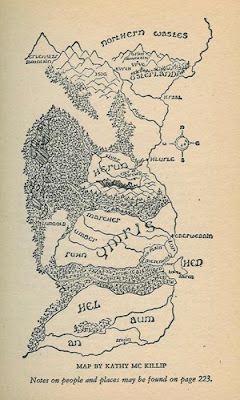 In case those of you who remember how I've long railed about all those thick books and endless series of fantasy novels, let me say I don't hate them all. I hate the ones that can't justify their length by the strength of their prose or storytelling. And that's most of them.

Epic is a question of scale, not length. Worlds at stake and struggles against the forces of evil are what matter. In five short books, Lloyd Alexander's wonderful Chronicles of Prydain put the whole known world at risk. Joy Chant's Red Moon and Black Mountain does the same thing in a single volume. Glen Cook's original Black Company trilogy is monstrously epic and under a thousand pages. More recently John Fultz did epic in his three Books of the Shaper.

So that's what I'm working on these days. And I am still reading the long 19th century stuff, but this is going to take up lots of my reading and writing time so I figured why not give the site a new look to herald that? Enjoy!
Posted by The Wasp at 1:22 AM