He's a little bit 日本人 and a little bit nordisk: Gonji: Red Blade from the East: The Deathwind Trilogy, Book One by T.C. Rypel 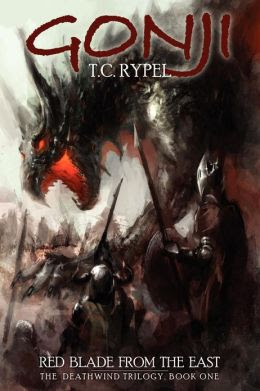 Because I can't focus these days and as a result I read more slowly than molasses dripping on a winter day, it's taken me a month to read Gonji: Red Blade from the East, the first volume in T.C. Rypel's Deathwind Trilogy.  That's my first disappointment concerning this book.  I mean, there I was back in January plowing through books to write about and then I downloaded this and BANG, I hit some sort of wall constructed of anti-reading matter.
Rypel's book stars a half Japanese half Scandinavian warrior, exiled from his home and searching Europe for somebody called the Deathwind.  There're skillfully described battles, monstrous monsters, strange, unearthly enemies with unknown agendas and political machinations.  There's no reason I shouldn't have blown through this book.  But nope, whatever held me back kept me at this book for a month.  Just thinking about that bums me out.  But I guess that's not Rypel's fault. 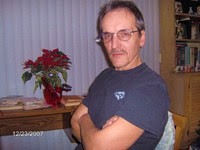 My first "disappointment" with this book is that it alludes to scads of things about its antagonist Sabatake Gonji without answering them. I posted a question on Good Reads S&S group (worth checking out) and got a lengthy answer from the author himself.  Basically, T. C. Rypel developed a long back story for Gonji and decided to start the books where he becomes directly involved in a sorcerous war "involving an age-old tyranny ruling over mutltiple, concentric worlds",  Set against this background, Gonji is driven by the last words of his mentor, a Shinto priest, to search out the Deathwind in the distant west.  So, thanks for "making" us need to read the rest of the series just to know what's going on. ;)


My second "disappointment" with Gonji is that it's a cliffhanger.  In the last pages Gonji's wangled his way into a meeting with the King Klann, seemingly the book's main villain.  Klann's remained off stage for the whole book, and the reader is as desirous of meeting him as Gonji.  Then, literally on the last page, it's revealed everyone has to wait for Book Two, "The Soul Within the Steel" (which still isn't available as an e-book).  Curse, you, Mr. Rypel, for grabbing and holding our attention enough to make us want, no, need, to buy the next book. 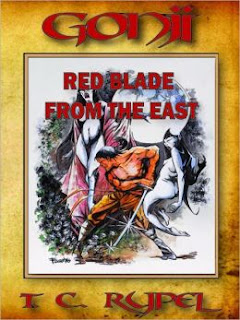 I hope it's obvious that I liked this book.  While motivated by the charge of destiny to search out the mysterious Deathwind, Gonji is also moved by the simple need to eat.  Gonji's a strange mix of simple survivor and noble hero.  In the book's first section he falls in with a fairly unscrupulous mercenary company serving in King Klann's army.   Before he escapes their service he's constantly examining his options, the state of his honor and how far he's willing to go fighting alongside the mercenaries.  Eventually they cross a moral line Gonji finds impossible to countenance and he flees.
From there, several unpleasant encounters direct him toward the city of Vedun.  A dying monk asks him to deliver a message to someone named Simon Sardonis.  Later he is too late to save a young man from death but manage to kill his tormentors.  The body he feels obligated to return to its family turns out be that of the brother of one of Vedun's most important men.
Built high up in the Carpathian Mountains, Vedun has existed for some time going its own way.  Protected by geography and a local lord and his army, Vedun has avoided becoming enmeshed in the struggles of the powers that surround it.
Gonji reaches Vedun just as the forces of King Klann have staged a coup de main and forced the city's surrender.  Gonji enters a city in chaos and sets about insinuating himself into the lives of several important people.  From there things begin coming together and Gonji looks like his long traveled road to the Deathwind might be come to an end.
There are great scenes of action in Red Blade from the East but they're not the focus of the book.  Much of the book revolves around Gonji struggling to forge a place for himself in Europe.  Half-caste and moulded by the honor traditions of Japan, he's rarely at ease.  Too often he's succumbed to compromises that would have required his suicide in the past.  He's constantly torn by events, a desire to survive and his search for his destiny alongside the Deathwind.  Gonji desires to be noble and heroic but events and a willingness to compromise have made it an ongoing struggle.  Rypel's created a character of admirable depth and introspection, things often lacking in S&S. 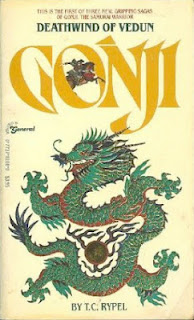 Putting aside those accolades, the book is plenty exciting.  It commences with a duel with vampires and then moves to a fierce running battle against Imperial soldiers.  There's a rooftop duel against a flying beast and a display of Japanese martial arts.  Several small fights between Gonji and men he's angered punctuate various chapters.  All this is delivered concisely and in clear service of the greater story or to expose more of Gonji's character and never gratuitously.
Gonji's story was first published in the eighties by Zebra.  Now Borgo's presented new, improved editions with much pulpier (and ones that don't look like sequels to Shogun).  I don't know when e-versions of the next volumes will be available but I hope it's soon.  For what's a relatively short book there's a whole lot going on and I don't want to struggle to remember what it was.
Posted by The Wasp at 11:32 PM