Into the Darkest Places - Nifft the Lean 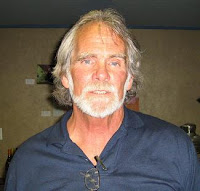 So nearly thirty years ago when Michael Shea's "Nifft the Lean" was first published by DAW, my friend Carl O. tossed it my way to read.  And I didn't.  Since then I've read a decent chunk of his horror writing and enjoyed it a lot (particularly the oft anthologized "The Autopsy").  Still, I never read "Nifft the Lean".  Even after reading that he'd written an authorized sequel to Jack Vance's "Eyes of the Overworld" called "A Quest for Simibilis" and an interesting original novel called "In Yana, the Touch of Undying" I didn't read "Nifft the Lean".  Now that I've read it I feel kinda dumb for missing out on Nifft for all these years.  Or at least somewhat deprived.

The book, a collection of four novellas (or are they novelettes?) are cleverly presented as tales told to others and wrapped around by a eulogy for Nifft presented by his friend the scholar Shag Margold, mines material similar in baroque darkness to Clark Ashton Smith's Zothique.  He also works with a verbal palette similar to Smith's and Jack Vance's.  Nonetheless, Shea's despairing world, roguish character, disturbing visions and voice are wholly his own.

The wraparound eulogy is studded with ludicrous and elaborate historical details and provides the readers with a complicated geography.  That history provides much of the humor in the book.  It's a black humor, such as when the narrator asks which is worse for a nation, to be ruled by a vampire queen or warmongers.  There are funny and outrageous bits in the actual tales of Nifft, but that is usually quickly smothered by the black events being chronicled and nature of the horrific things encountered therein.


In the first story, "Come Then Mortal, We Will Seek Her Soul", Nifft and his fellow thief, Barnar, traveling across a swamp take refuge one night up in the branched of a great tree.  In the course of the night Nifft tells his companion a tale of how he and an earlier companion, Halder, traveled to the land of the dead and Halder came to remain there.

Speaking incautiously, but sincerely, Halder, hoping to perform one truly great, artistic theft, summons up a spirit of a dead woman, Dalissem.  She offers them a great treasure if they will bring her still living lover, Defalk, to her in the land of the dead.  They had sworn a mutual suicide pact but he failed to keep his end of the arrangement.  Smitten by her beauty and deathly majesty, Halder immediately accepts her offer.


The first portion of the tale is about Nifft and Halder's approach to the task at hand.  They have limited compunctions about what they're willing to do to carry out their bargain with the dead woman.  They kidnap Defalk and in order to enter the land of the dead speed a dying man to his end with poison.  They are as roguish as Vance's Cugel, but much more intelligent and clearly worthy of their acclaim as great theives. 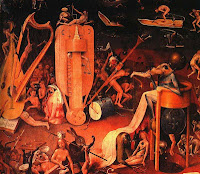 It's following their piggybacking into the land of the dead where Shea kicks things into overdrive.  David Pringle's "Modern Fantasty - The Hundred Best Novels" describes the story's land of the dead as Boschean.  It's not an inadequate description.


There are sewers filled with the squalling and flopping spirits of the damned that lead to great monster filled seas.  On the land their are demon occupied homes thatched with bones and caulked with blackened blood.  In other places the damned are bled and harvested.  It is as dark and relentless a place as can be imagined.
What I enjoyed most about the story is Nifft's gradually changing attitude toward Defalk.  Pudgy and concerned with status and wealth, Nifft has no initial sympathy for him, especially in light of his oath breaking.  During the tale's unfolding Defalk accumulates a certain amount of dignity and Nifft finds himself almost pitying whatever fate Dalissem has in store for her unfaithful lover.
The second story, "The Pearls of the Vampire Queen" is a little more mundane.  Nifft and Barnar, hoping to poach a cache of black pearls from the forbidden-to-outsiders swamps of the Vampire Queen Vulvula.  Along the way they discover the nearness in time of an event that can set the stage for acquiring even greater wealth than anticipated.


Each year the Queen takes a new king and at a year's end must drain him of all blood or she will age.  Of course this leads to Nifft and Barnar devising a plan to gain a quantity of the king's blood and hold it for ransom.  It involves spying and sneaking and the use of a monstrous puppet.


The third, and longest, of the stories is "The Fishing of the Demon-Sea".  Nifft and Barnar are framed for thievery by Kamin, the Rod-Master of Kine Gather, one of that city's wealthy councilmen.  To avoid an elaborate and painful execution they are forced to seek out his son, Winmfort, in the primary underworld (there are at least two deeper and darker ones under the primary).  The son foolishly experimented with dark magic and contrary to his teacher's admonitions, rarely studied all he should or acted with due and proper caution.  The result was his imprisonment by an aquatic demon and trip straight to the underworld.
This time a second party's death isn't required for Nifft's translation to another world.  Kine Gather and the surrounding lands of Kairnheim are riddled with rifts to the demonic subworld.  They were caused by the constant use of poorly thought out and employed magic by Kairnheim's two warring peoples, the Prior Kairns and the Latter-Kairns.  The endless fighting by poorly cast spells has weakened the junctures between the mortal and demonic worlds.  Nifft and Barnar enter the underworld through a portal at the bottom of a mine shaft dug to deeply by workmen in past days.

The first goal of the adventurers' journey is to find the human adventurer, Gildmirth the Privateer.  In ages past his actions trapped him in the underworld.  Nifft and Barnar hope to find him and get his aid in tracking down and freeing Wimfort.  They hope that Gildmirth's long knowledge of the underworld will let them rescue the boy and bring him back into the light of the world above.
More than the landscape of "Come Mortal, We Shall Find Her Soul", that of "The Fishing of the Demon-Sea" is truly Boschean.  The demon citizens of the underworld feast on the devastation and pain they wreak on the souls of the humans they hold in thrall.  This is done with transformation and torture of the most unbelievable manners.  While sailing the sea of the title, Nifft and his companions come across a demon's slave broken free of her captivity: "It was a woman. The great fan she was splayed against was unbroken, and we could see how it originated from her flesh. Her extended spine was its center-rib. From her sides the grey of nerves and red-and-blue map of veins entered the fan’s weave. So did her long black hair, spreading out on it like a vine on a wall. Nerve-threads from her nipples, and the abundant dark fern-curls of her loins, complicated her bondage above and below. The fan spun slowly, trailing a torn-out root stalk."  And there are worse things waiting once they begin their return trip.
The finale of the book's quartet of tales is "The Goddess in Glass".  Nifft is more of a sideplayer in this tale of the ironmongering city of Anvil Pastures, ore excreting beasts and an alien goddess.  It's a little too long and suffers from Nifft's secondary status.  His lively narration is much of what makes the first three stories enjoyable.  Still, Shea provides several striking images that rectify some of the lack of Nifft.
"Nifft the Lean" is a dark book.  The land of the dead and the underworld of the demons is unrelentingly painful and horrible.  But they're also places of terrible majesty and worth a visit.
There are two later full length novels continuing Nifft's escapades, "The Mines of Behemoth" and "The A'rak".  I've yet to read them though I do plan to at some point.  The former is available with "Nifft the Lean" in the compilation "The Incompleat Nifft".  All the Nifft books are available at decent prices on Amazon.  I can't say anything about the later books, but I wholeheartedly recommend getting your hands on a copy of "Nifft the Lean" and savoring Shea's dark vintage.
Posted by The Wasp at 12:27 AM

Email ThisBlogThis!Share to TwitterShare to FacebookShare to Pinterest
Labels: Come Then, Incompleat Nifft, Michael Shea, Mortal. We Will Seek Her Soul, Nifft the Lean, review, Swords and Sorcery, The Fishing of the Demon-Sea, The Goddess in Glass, The Pearls of the Vampire Queen