The Spell of Witch World - An Unknown Land 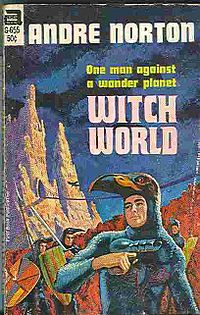 Andre Norton's Witch World books are another series I've avoided for way too long. There were two things that kept me away from them over the years. The first, when I was younger, was their name: Witch World. It seemed a little too twee. When I was older there were just too many other things I wanted to read that it just never crossed my mind to investigate Andre Norton's catalogue. If she ever occurred to me at all it was as the author of Starman's Son and several other books shelved in the children's section at my local library.  Later I found a few scattered Norton volumes in the boxes of paperbacks my dad kept in the attic but, again, nothing prompted me to read them. At the time the cover of "Witch World" turned me off (today I love the goofy looking thing).


Not until I started contemplating this blog did I actually read anything by Andre Norton. There were several anthologies I had never managed to buy copies of until the last two years, one being "Flashing Swords #2", edited by Lin Carter.  I had read some of its stories before but not "The Toads of Grimmerdale" set in Norton's Witch World.
I was surprised by the darkness of the story.  Like I said, I had assumed the Witch World stuff was light and airy and my first encounter with it was a story of revenge for rape set in a country savaged by years of war.  Well, I was hooked. 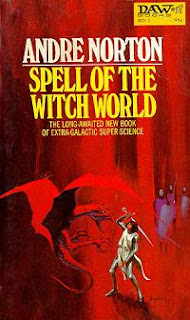 I quickly read "Spider Silk" in Flashing Swords #3 and "Falcon Blood" in Amazons!, edited by Jessica Amanda Salmonson. I finally rooted through boxes in my sister's attic and dug out my dad's ancient copy of the first novel, Witch World, and devoured it. Its inventiveness, fast pacing and the sheer fun of it made me an instant fan.