There's been plenty written about the recently departed Ursula K. Le Guin, all of it far more knowledgeable about her and her work than anything I could add. Aside from the Earthsea series, my encounters with her work were never to my liking. While I didn't read either of her big books (The Left Hand of Darkness and The Dispossessed), I read The Lathe of Heaven plus assorted short stories. Too often, politics, for want of  a better word, intruded badly or were so far from my own, I found myself completely disappointed. I doubt at this stage I'll get to either of those two works, but I'm pretty sure I'll reread the Earthsea books, at least the original three, again before I shuffle off this mortal coil.

In my rambling post at Black Gate the other day, I described how my friends and I passed each other fantasy books like contraband. If one was a scifi/fantasy fan one constantly scrambled to find the next book to read. There was only so much an eleven year old could find one his own. Even more than the library, new books came from my dad and my friends. I can't quite remember whether it was Karl H. or Jim D. who first gave me A Wizard of Earthsea, but both were huge fans of the trilogy. Both of them must have told me nearly every detail in that book, - the wizard school, true names, the otak - if not the entire plot. Whomever it was, I wanted to read it right away. Not unexpectedly, my local library had it (Thank you, Ms. Herz), and within a week or two I'd read all three.

A Wizard of Earthsea, the first book, is the best. There are exciting scenes of magical battling, a hero forced to face the damage brought on by his pride. It's a coming of age story as well as a travel guide to Le Guin's unique setting.

The Tombs of Atuan was pretty disliked by me and my friends when we first read it. Returning to it in college, I found it my favorite of the three. True, Le Guin expands on the villainy of the white-skinned Kargish people, which feels too-on-the-nose point-making, but it's a good book. Basically, it's a Gothic, starring an essentially orphaned girl, haunted environs, and a mysterious man.

The final original book, The Farthest Shore, is more interesting than good. It explores more deeply the magical system of energy and balance set up in the first book, which is done well, but it's all a bit of a slog for a book that only comes in at about 200 pages.


Jeffro Johnson has a piece explaining why he believes these books don't belong in Appendix N. I understand his perspective, and I don't disagree. Le Guin's goals and interests in writing these books were quite different from Robert E. Howard's or Fritz Leiber's, and they don't mesh with D&D, especially when it was first rolled out. Le Guin wasn't definitely not writing pulp or heroic fantasy. But to say she wasn't writing fantasy is a bit extreme.

She had definite ideas about race, the sexes, and spiritual balance she wanted to explore. These would become more burdensome to the stories as time went on, but in the first three books, especially as a kid, I didn't find them annoying. Instead, she used the trappings of what was becoming an increasingly tropified genre to tell the stories she wanted to and it kept me and pretty much everyone I knew captivated.

So, here are some covers. The first, by Ruth Robbins, were on the hardcovers I took out from the library. The next, by Pauline Ellison, were on the softcovers most people I knew actually owned. The last are by Yvonne Gilbert and are the best of the newer (meaning after 1975) covers. 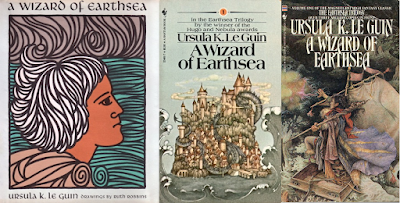 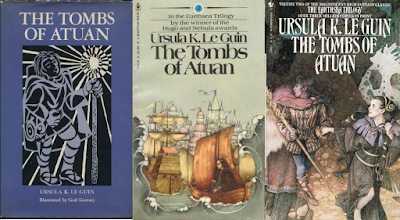 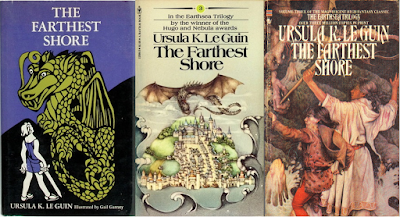 Email ThisBlogThis!Share to TwitterShare to FacebookShare to Pinterest
Labels: A Wizard of Earthsea, Earthsea, The Farthest Shore, The Tombs of Atuan, Ursula K. Le Guin