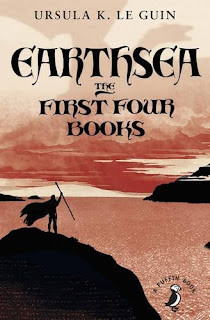 If you're not following along with me over at Black Gate (what, you're NOT?), I'm excavating my parts of my childhood and revisiting some of the fantasy that was important to me before the age of sixteen that isn't by J.R.R. Tolkien. I just read Lloyd Alexander's The Book of Three (1964), I'm presently reading Ursula K. Le Guin's A Wizard of Earthsea (1968), and next week I'll pick up Madeline L'Engle's A Wrinkle In Time (1962).

It was the death of Ursula K. Le Guin which triggered me to do this. As I wrote recently, the Earthsea books were incredibly important to me and my friends. After the Lord of the Rings, they were easily the most-read series among us. I think we had all read them well before we started playing D&D, so their influence went straight into our playing. True names, familiars, wizard colleges, shape changing, it all got thrown into our early games. Of the three authors just mentioned, she was the only one all of us read.

Everyone I knew seemed to have read A Wrinkle in Time, but I don't know anyone else who read Alexander's books. L'Engle's books don't lend themselves as easily to gaming, but Alexander's do. I definitely included a dozen or so Horned Kings in my games over the decade. My penchant for adding Celtic stuff to my campaigns came from my love for the Prydain books and Moorcock's Corum books.

You can't always go back home again. When I tried to read de Camp's The Fallible Fiend a year or two ago I couldn't make myself do it. Where once I found wry satire of humanity, I now only found bad jokes. Like with The Tritonian Ring, which I managed to finish and review, there's a great central conceit to the novel but the execution is poor. I was very surprised when I listened to the Sanctum Secorum podcast on The Fallible Fiend and they all pretty much dug it (and they mostly didn't like Three Hearts and Three Lions - what is this world coming to?). (But then they love Zelazny's Night in the Lonesome October, which is great, so maybe they're okay. It's very confusing.) 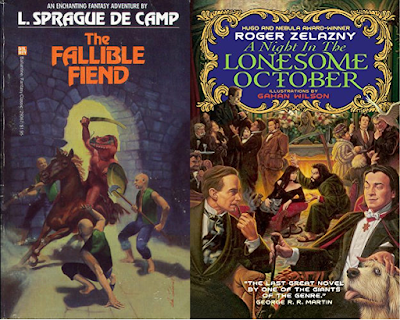 I am very happy to learn, sometimes you can go home. The Book of Three was as good as I remembered, A Wizard of Earthsea far better than I hoped for, and a few chapters in, A Wrinkle in Time remains absolutely delightful. I read other fantasy and sci-fi as a kid, but, again, other than Tolkien's, little of it made as much of an impression on me. 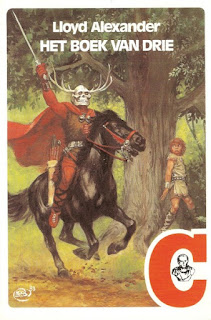 Leaving aside Alexander, they also helped form a common language between me and my friends. For us, there was no such thing as fandom (looking at what fandom's become now, I can only say "Thank God.") to connect us to some wider world. At some point, you realized you liked sf/f and started keeping an eye open for it or other people who read it.

Contra a thread on Twitter recently, being a consumer of this stuff was not good for social acceptance. It also didn't make you someone given to excluding other people. Everyone needs friends, and someone who was into Elric and Lord of the Rings was a better prospect for friendship than a jock, regardless of class, race, or religion. Later, when I started playing D&D, we didn't keep out girls. If we knew any girls who wanted to play, we would've said "Yes!" very loudly. That many us didn't know many girls, and that they would've scared the heck out of us, was one of the reasons we had so much time for gaming in the first place. Sf/f fans were exactly social outcasts, but there was more than a hint of the nerdish to us.

Lloyd Alexander and Ursula K. Le Guin are books woven from the same basic threads, as far as I'm concerned. The Book of Three and A Wizard of Earthsea are both largely about a young man maturing and learning the weight of his actions and the necessity of taking responsibility for them. Simple lessons, but ones that have probably more value today than fifty years ago. Aside from something as mundane and extra-literary as relevance, the books remain good stories told well.

They're very different, stylistically. Alexander writes more prosaically, keeping things fairly simple. Even with its dark moments (wicker men full of people set ablaze for example), The Book of Three has moments of humor, both verbal and slapstick that keep things light - even as Alexander is slowly building up serious themes. There's little to no humor in Le Guin's book, which, overall, has a more serious and somber atmosphere than Alexander's.

Le Guin's book is written in a more consciously archaic and poetic style. I don't have a lot of patience for that these days (writes the guy who's working his way through The Night Land), but she does it very well, never becoming too stiff.


The island of Gont, a single mountain that lifts its peak a mile above the storm-racked Northeast Sea, is a land famous for wizards. From the towns in its high valleys and the ports on its dark narrow bays many a Gontishman has gone forth to serve the Lords of the Archipelago in their cities as wizard or mage, or, looking for adventure, to wander working magic from isle to isle of all Earthsea. Of these some say the greatest, and surely the greatest voyager, was the man called Sparrowhawk, who in his day became both dragonlord and Archmage. His life is told of in the Deed of Ged and in many songs, but this is a tale of the time before his fame, before the songs were made.

That's the opening paragraph, and it's wonderful. She tells you outright that Ged is a mighty wizard with great deeds to his name, but now she's going to tell you the truths behind how he came to be that man. It's the perfect intro, promising great things, which Le Guin then goes on to deliver. The novel is by turns exciting and introspective. Ged's magical repulsion of the Kargish raiders and his battle against the dragons of Pendor are rousing, and Ged's journey to the evil Court of Terrenon on Oskill is wonderfully dark and creepy. Ged's coming to terms with the cost of his pride and his responsibilities as wielder of tremendous power is presented flowing from the story and not just from Le Guin's desire to lecture. 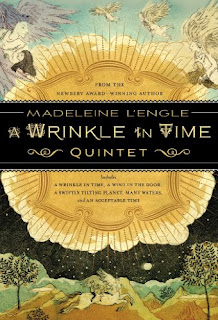 I'm sorry this piece isn't more coherent, but it's serving as a bit of a kickstarter for getting me writing here again as well as an opportunity to ramble around the corners of my memories. I'm only just now recalling that the same friend, Karl H., pointed me both to A Wrinkle in Time and A Wizard of Earthsea (he also gave me James Blish's Black Easter, a very different sort of book).I got to Alexander from the inclusion of an excerpt from The Black Cauldron in my second grade reader. I can still remember the illustrations of Gurgi, and the three witches. It wasn't until a year of two later that I found the series on my neighborhood library's shelves.

I'll stop there. How do you remember the sf/f books of your youth? What books were they? Any of these?