Dread Empire Covers over the Decades

So I've triggered a Glen Cook-athon for myself. First I blog about his short stories, now I'm preparing to delve into the Dread Empire series (not the two El Murid books. I've read them in the past five or six years). I might even hit the Black Company books later this year.
So here are the covers of all the Dread Empire books as they were first published and as Night Shade republished them thirty years later. Really not a lot of good stuff except for the two Night Shade omnibuses, A Fortress In Shadow and A Cruel Wind.

There's definitely a pulpier sensibility to the earlier books. The newer covers, while clearly genre books, have a similarity to the WotC-era D&D stuff and computer game boxes. There's a certain homogeneity to too much modern "geek culture" products and these feel of a piece with that. Not to my tastes, but the new covers definitely make the books look like they're of this age and not three decades ago. 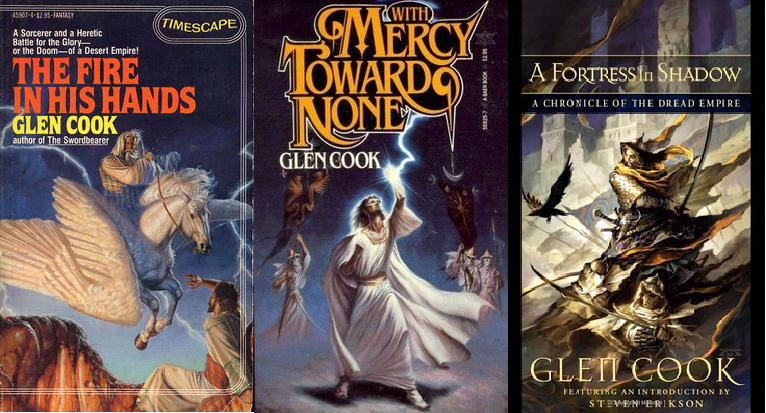 The original covers for the El Murid books. The originals really are not that good. There's a dullness to them, especially for The Fire In His Hands. The cover for the later omnibus is by Raymond Swanland and is much more vivid.

The first three are covers I've griped about before. A Shadow of All Night Falling has characters who look unfinished. October's Baby, well, I'm just going to say look at it yourself. All Darkness Met isn't that bad. I don't really love the look of Bragi Ragnarson but the princess and the tiger in the background give it a nice pulp feel. Swanland's cover for the A Cruel Wind omnibus is, again, vivid and bold and provides a nice hint of the epic awesomeness of the battles against the Dread Empire. 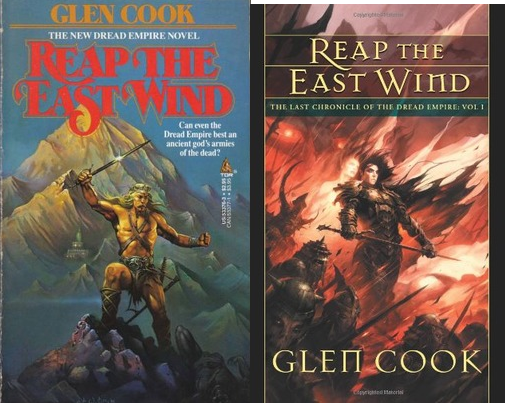 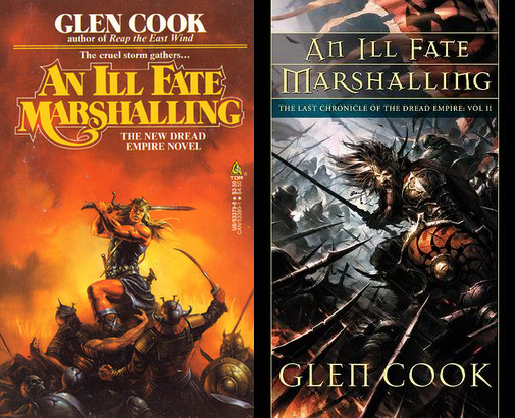 Well, what can I say? I can say the original covers to the left stink. There's no excuse for them unless lunatics were in charge of the art department. Now those are by Ken Kelly, artist of some of the best REH covers but here his style is awful and a total disservice to the books.

On the other hand, Swanland's work for the gaming industry comes through loud and clear in his covers on the right and I don't like them either. There's too much stuff/gear/accoutrements on the characters and I find the armor too busy. They're not all that different from the other Dread Empire covers he did but I find myself irritated by these. 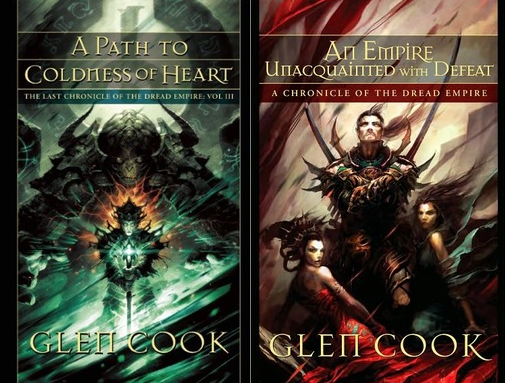 These exist only with Swanland covers. Not having read A Path to Coldness of Heart my reaction to this is purely visual. I don't like the big brain guy, nope, I just don't like him. My complaints about Empire are the same as about the previous two Swanland covers - too gamey. I'm also pretty sure no image like that ever even occurs in any of the stories.

In the end, I don't buy books based on the cover (oh, that we could). Presumably the art's chosen to help move copies of the book. While I'm not a fan of much of the new fantasy cover art I'm no expert on what sells and what doesn't. But I can complain, and that I'll keep on doing.
Posted by The Wasp at 5:05 PM