Glen Cook Is the Bomb - Most of the Time 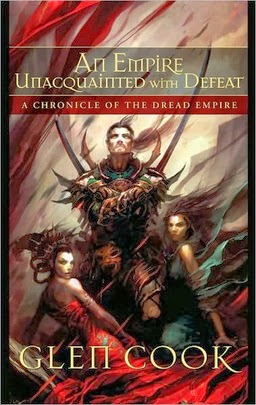 My review of Glen Cook's Dread Empire anthology An Empire Unacquainted with Defeat. Considering it contains my FAVORITE STORY  by the man, I had high hopes for this one. Unfortunately, those hopes were brought to Earth by fact that most of the stories are only ok.
Still, if you're a fan of the man (and if not, why not?), it's worth having on the shelf. His foreword and intros are informative and funny. They have the same sort of direct quality of his fiction. He cites "Severed Heads" as being one of his personal favorite stories because it earned more from foreign reprints than many of his novels. It's rare I read (maybe I'm not reading the right things) an author talking about money.
I think I need to read the Dread Empire series from A Shadow of All Night Falling to the concluding volume, A Path to the Coldness of the Heart. I remember how excited I was when I reached the battles mentioned in "Filed Teeth" and they way exceeded my expectations. Great, awesome stuff. I'd love to see if the books can still get that sort of reaction from me. After that maybe I'll reread all the Black Company books.
Now don't freak out when I say the music I've listened to this past week was mostly by the Monkees. Some of the best pop songs ever came from those guys. Don't tell me about them being manufactured. Sure, Mickey Dolenz and Davy Jones weren't real musicians but they learned how to sing the heck out of a song. Listen to Headquarters or Pisces, Aquarius, Capricorn & Jones Ltd. and not at least hum along.
I actually came to the Monkees sort of backwards. The show was on when I was a kid and you'd still hear some of their hits on the AM music station but I never really thought about them much. In 1992 I heard a review of Mike Nesmith's Tropical Campfires on NPR and picked it up. I've been a fan ever since.
Listening to that and other albums of his led me to check out the Monkees. Pretty quickly I discovered they were pure fun. If you like good sixties pop check 'em out.