For the first time in over three decades I played a session of D&D. Not only did I play with my eleven year old nephew and his friend and my wife, I also played with Densel E., the man who introduced me to the game, as well as another friend from my old gaming days.

I stopped playing D&D around 1983 in favor of other games; first DragonQuest, then Rolemaster, and finally the Hero System. First, a group of us had decided we wanted a system where armor made you harder to hurt but easier to hit. Secondly, we wanted one that awarded experience for cleverness and roleplaying and not just killing things. 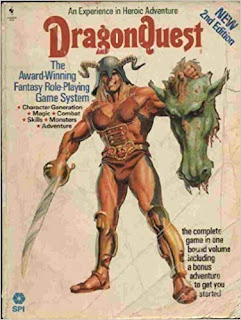 As it probably did for lots of viewers, Stranger Things introduced one of my nephews, Jac, to the idea of roleplaying. At the same time he was watching the show I was learning about Dungeon Crawl Classics from Goodman Games. Reading about the game and listening to the hosts of the Appendix N Book Club and Sanctum Secorum podcasts talk about it really made me want to roleplay again. At some point it became clear I was going to have to run a game for Jac. Since he and a friend were coming to stay for a week at my house this summer a date was picked and I started relearning how to run a game.

Somewhere between the decision to play and last week, the guy who taught me D&D and I had renewed our friendship after many years. When I told him about reffing a game, he suggested D&D 3.5. I read the rules and it seemed good enough. 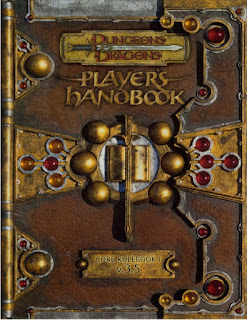 We spent a night making up characters and explaining the basic of roleplaying to the two kids. My nephew made up an elf cleric and his friend an elf paladin. Hallie decided to play a half-orc barbarian and the two old timers a human wizard and a human rogue. The following day we played.

The adventure I created in the preceding weeks was this: With more than a tip of the hat to Apocalypse Now, I planned to send the players off down a river into unexplored hostile country. Unbeknownst to anyone but me, goblins to the south of a frontier settlement had been riled up. A human soldier exposed to strange, chaotic magic had become their leader/shaman. He had infected them with some of the same magic and they had taken to raiding the village and its outlying farms. In turn the village put out a call for soldiers to come protect the town. In other words, standard frpg stuff.

The adventure wasn't planned as anything spectacular, just a nice basic intro to get new players a feel for roleplaying. I expected the players to hunt for some clues, journey down the river in search of the goblin base, and get into some fights. All that happened, just none of it in the way I had planned.

Immediately upon arriving in the town, the group started throwing a monkey wrench in my plans. No in a bad or annoying way, but in a way that meant I had to switch things up on the fly. I haven't had to do that in ages so I was a little rusty. The longer we played, though, the more it came back.

My plan was that the players would stick around town and the first night goblins would attack. Instead of just waiting, the players decided to find tracking dogs to follow the goblins. It hadn't even occurred to me that idea would even arise, but I sure didn't want them getting dogs. So, I decided a farmer had some good tracking dogs but that when they to get them a frenzied goblin attack would be in full swing.

Later on I got to mess with them when they had to go overland in search of the goblin lair instead of taking boats. If they'd fought the goblins at night they would have been able to take their canoes. This meant instead of meeting more goblins on the river, they instead faced off against several waves of very low level myconids (something I'd never used ever before in D&D). While the goblin fight had proved tough for a first-level party, the myconids had left two players almost dead. After that I got to pull off the big reveal of the goblin lair. I'll save that for the next time I get to ref this campaign.

The best thing that happened was the banter back and forth during the session. I haven't been part of that in 25 years. For the two old-timers and myself who've been friends for forty years it was natural, but it took a little longer for my wife and the boys to get into it. Densel kept prompting people to talk as their characters, not themselves. Soon enough, everyone was speaking in accents, haggling with tradesmen, and roaring in battle. It was everything I hoped it would be. A lot of fun was had and my nephew and his friend are clamoring for another go as soon as possible.

As to 3.5, eh, it's alright. I think it makes things a little too complicated for rand new players, requiring them to think on skills and feats before they have an understanding of how the game's systems work. As an experienced player who prefers skill-based games I deem it ok. The feats are a nice idea and really let you tailor your character, but I think they get too specific and add another bunch of things to be remembered.

While I'll keep on with the 3.5 with my nephew, but what I'm really hoping to do is run a DCC game with some of the old timers. It's got a nicely lunatic pulp feel and looks like it affords the ref and players a looser style of play. I'm also a bigger fan of S&S and pulp in my gaming than high fantasy. I'm thinking it could be a real blast. 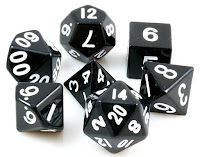