A few weeks back I became a member of the David Gemmell Award site.  I've only read the first few of his books and they were
pretty dang exciting (as if that's news).  Considering the DGA's efforts to maintain and awareness of Gemmell's books and promote heroic fantasy, I figured it'd be worth my while to sign up, so I did.
Perusing the site, I discovered the Long List of nominations for this year's award.  I also saw it said if you asked for a book on the list they'd send you one provided you provided a short review.
I read the list over and decided the less familiar authors would be the way to go.  I'm constantly torn between rereading the comfortable and familiar and striking out into new literary territory.  Almost at random, I read the synopses of several books before settling on three titles; Alexey Pehov - Shadow Blizzard, Anthony Huso - Black Bottle, and Jo Spurrier - Winter Be My Shield. 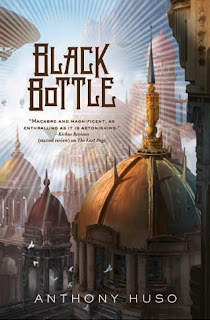 Since the deadline for reviews was July, 31st and I requested a book on July, 10, I figured it was too late and sort of forgot about it.  Then on July, 25, a copy of Anthony Huso's Black Bottle showed
up in the mail.  It took me a few minutes to remember what it was.  Man, was I presently surprised with the book.  My review was posted at their site this afternoon.
Here's what I had to say for the good folks over at DGA:

Don't do what I did and read Anthony Huso's Black Bottle without having read its predecessor, The Last Page. Failing to do so deprived me of another book length exposure to Huso's idiosyncratic world of zeppelins, a bold king, a royal consort in possession of an evil tome, plots and more plots and Lovecraftian entities forever knocking at the doors of the world. Next to strange, wild science and near-magic, are tabloids papers, looming billboards, carrier pigeons and dry cereal in colorfully decorated boxes. It's a wondrous amalgam of Edwardian technology, modern commercial culture and things man was not meant to know.
Presumably, in The Last Page, Caliph Howl, king of the rugged northern kingdom of Stonehold, died and was resurrected by his consort, Sena Iilool. Idolized, even worshiped, by many, she is also feared and hated by many. Black Bottle, only Huso's second published novel, starts with Taelin, a young woman from the southern Pandragor Empire, traveling to Stonehold, with hopes of do something, anything, to destroy the reputation of a woman she finds blasphemous.
There is no way to do justice to the complexity of Black Bottle's plot. There are plots whirling within plots, some stretching back millennia. Stunning set pieces abound, ranging from entrail-trailing-witch-heads, to exploding-from-the-ground eel man monsters, to zeppelin destruction. In the end this is a story of insanely epic proportions rivaling the scope of Hodgson's The House on the Borderlands or Mignola's B.P.R.D. Stories. The story moves from political struggles over power sources and blasphemy and spiral into battles in pocket-dimensions, against unstoppable monsters and zeppelin pursuit over bottomless continental rifts and stark, empty desert.
Stylistically, Huso's writing is reminiscent of the late Jack Vance's, having a similar penchant for the word less written. The story's near magic is called holomorphy which normally refers to complex mathematics, and, indeed, spell-like functions involve intricate mathematical formulas as well as blood. Sena Iilool's supporters are called a colligation, which in logic means to subsume isolated facts under a single general concept.
Huso's writing isn't all strange, ornamental words. That's important in a book replete with so many strange concepts and jumping points of views. While much of the book is told by standard, omniscient narrator, there are numerous excerpts from books and journals. In fact, much of the deep underpinnings of Black Bottle's story are presented in those excerpts. Huso has a solid control of his narrative voices, making each unique for every excerpt and narrator. His prose is clean and not bogged down with endless bits of costume or gadget porn.


I selected this book to read from the Long List figuring that the big name authors' free books would have all been given away already. Scanning the authors I didn't recognize, the little blurb for Black Bottle simply caught my eye for which I am extremely glad. If this is what Anthony Huso is doing in his first book I am truly looking forward to what he does next.

Now I have to go out and actually buy the first book.  I don't think knowing how things end will take too much away from reading it.  Here's hoping.
Posted by The Wasp at 7:24 PM