The luminous Mrs. V. and I just got back from a nice roadtrip through the South.  Mostly it was just driving around checking out some utterly beautiful scenery.  If anyone every asks why you'd go to Arkansas, tell them it's because it's gorgeous.  I'm still debating whether the mountains of Arkansas or West Virginia are prettier.
We only had a few specific destinations in mind and managed to hit all of them.  The first was the Perryville battlefield in Kentucky. I get so much out of walking the hills and fields of the places I read about and experiencing a 3-D reality to then apply to the maps and narratives.

Perryville's an interesting and pivotal, if somewhat less well known, battle.  It was actually a little difficult to picture nearly 40,000 men fighting and dying over the bucolic green hills.  The visitors' center is well done and the presentation did a good job explaining a confusing conflict.

The next planned stop was the Laura Ingalls Wilder Home in Mansfield, Missouri.  My wife is a major fan of the Little House books (and assuredly not the tv show).  When we traveled to Montana a few years ago we visited numerous Little House locations.  I'm not a particular fan but all site we've visited provided me great insights into the pioneer life of the nineteenth century.
Our final historical destination was the Chickamauga battlefield in north Georgia.  Being one of the last major Civil War battlefields I haven't been to, this was my trip highlight.
Chickamauga was the only major victory the poor Army of 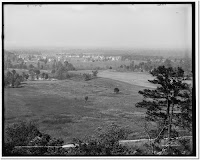 Tennessee managed to win over its various Union opponents. Strategically it led nowhere.  In fact, Union general Rosecran's defeat led directly to the introduction of U.S. Grant and W. T. Sherman to the region and the stunning defeat of Confederate general Bragg at Chattanooga a few months later.

We also, really only as an afterthought, revisited Gettysburg on the second to last day of driving home.  We got there after the visitors' center closed so we just did the auto-tour.  I've been there twice before but it was the first time I drove up Culp's Hill.  There, we climbed the observation tower.  The vista was stunning and helped reinforce the difficulty of communications and simply seeing things across the battlefield.
We did see other things (including Mammoth Cave, and Luray Caverns) but the above were the definite highlights.  If you never have, you need to get in your car and just travel around this country.  There's just so much to see and so many people to meet.

I just ordered and downloaded the new Morlock book, Wrath-Bearing Tree, by James Enge.  I still need to read the last one but hopefully soon. 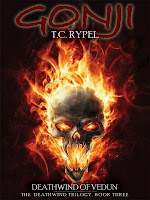 I also got the The Soul Within the Steel and Deathwind of Vedun, the last two books in T. C. Rypel's (and the man who called me an archaeo-bibliophile) Gonji series.  I think the first is next on my to-read list.

Finally I've ordered and paid for Deepest, Darkest Eden, edited by Cory Goodfellow.  I was hoping to find it in my mailbox when I got home but no such luck.  As you can see it's got an amazing cover.  It'll look great alongside my copy of The Last Continent from a few years back.


Swords & sorcery may not be as prominent as it was in the past, but dang, there is an overwhelming amount of great writing going on.  I really am going to try and stop buying anything new for the next few months so I can catch up a little bit.
Posted by The Wasp at 11:27 PM