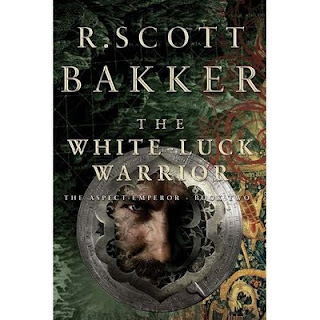 I finally finished R. Scott Bakker's "The White Luck Warrior".  It's the second volume of the The Aspect Emperor Trilogy, itself the second trilogy of his Second Apocalypse series.  I can't do justice here to the depth of the world and characters Bakker's created.  It's also the half way point in a planned nine book series and I won't even begin to describe what's going except to say it's big, very, very big.  I can say he's easily the only one of the big book writers right now doing anything I'll actually rush out to Barnes and Noble and buy it brand new in hardcover.
Bakker's books are partially a homage to the works of Tolkien (particularly to the vastness of their world creation) and similar big epic fantasies of the past as well as platforms to explore the underpinnings of belief, power and obedience.  How do certain people achieve such control over all of us and how and why do we let them do it?
I don't agree with Bakker about much (or at least what I've seen on his blog) regarding economics or politics, but I'm with him in support of world-building and epic fantasy as he's described in numerous interviews.   All five of Bakker's novels have captivated me and enthralled me with their scope and scale.
Oh, yeah, and their really, really cool.  There're battles, both with swords and arrows as well as with earth gouging magic, betrayal, mad barbarians and over it all is ladled serious amounts of crazy-sauce.  There are plots within plots and things man was not meant to know.  I bought the first one after being impressed by the interview linked to above and ended up finishing it in a day or two.
Check 'em out.  There are only five books right now, they're not too long, and there should only be four more to come.  As big epic series go I felt this one was worth my investment of time and money and I can't really recommend it enough.
Posted by The Wasp at 7:26 PM