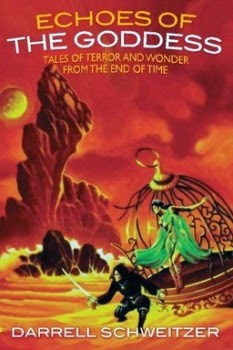 My review of Darrell Schweitzer's Echoes of the Goddess just went up at Black Gate. How have I missed him all these years? I mean, I saw his name around and read a great story he co-authored in Cthulhu's Heirs (have I mentioned that the Chaosium Cthulhu Fiction series is awesome?), but I had no sense of how good a writer he is.

When I read and reviewed The White Isle last year, I was almost shocked by the misery of the book's underlying conceit. It's an early work (I think he was 23 when wrote it) that was more affecting by the mature works of lots of authors I like. I knew he was someone I needed to read more by.

Echoes of the Goddess is a collection of eleven stories, some connected, all set in the time following the death of Earth's Goddess. This is not heroic fantasy, but it's definitely not your standard issue fantasy either. It's a just what the subtitle says: tales of terror and wonder. When you're ready to burn the next book starring an elven ranger or a dwarven tunnel-rat or the secret heir to the grand poobah, pick this book up. It'll clean your palate and show you how good fantasy can be. Not every story is great, but I guarantee you'll remember the ones that are for a long time.

The reviews I read compared it to works by Lord Dunsany and Clark Ashton Smith which very generally fits. Schweitzer, though, is much more concerned with his characters than simply creating and telling ornate myths of his own making. Go read my review to get a taste of the actual writing in the book and my further thoughts on the book.

After some baroque music this past week, Schweitzer's book propelled me back toward the very heavy, spacey sounds of bands like Nebula and Orange Goblin. Maybe not the most appropriate tunes for Echoes of the Goddess but they worked and propelled me through the writing of most of my review.