Just finished my monthly roundup of S&S and heroic fantasy short stories for Black Gate. Some good yarns (and poems) this month. Go check out HFQ and S&S Magazine for yourself and read some good, new stories.

I just picked Gonji: The Soul Within the Steel back up and noticed that's it's pretty long compared to most of what I've been reading for the past few months (making myself read a book a week for Black Gate's encouraged me to read shorter books). One of the things about e-books is that unless you pay attention to the location number at the bottom of the screen and have an understanding of what it means you don't really know how long it is in pages. That's still what defines a book's length to me.  Looking at the ISFDB, Gonji:TSWtS is over 425 pages long and most of the books I've been reading lately are only 200+ or so.
I just picked
I've harped about the ridiculous length of fantasy books these days many times.  It's a rare book that needs to be longer that long. Now at 425 pages or so, the Gonji books are longer than I often read these days (if only DAW's 200+ page books were the norm again), but they don't feel padded or rambling. Same for James Enge's Morlock books. Very different writers, but both kept me riveted. Neither slapped on side plot after side plot or gave me the life story of the ratcatcher's mother's second-cousin who once saw a dragon do something nasty in the woodshed.
On the other hand, look at Tad William's Memory, Sorrow and Thorn. In paperback its four volumes (and it's four 'cause they had to cut #3 in half!), average 780 pages for a grand total of 3117 pages. I liked the series, even reading it when stuck riding the outside deck of the SI Ferry in the cold. At some point, though, I felt like one of Napoleon's grognards staggering out of Moscow.

Unless Williams was so in love with his world that he couldn't bear to leave it, in which case I'll forgive the man his obsession, there's no real excuse for that length. The book reads like LotR might if Tolkien had fully developed every part of the appendices and added them to the text. Too much plot, too many characters, and too distracting.
There are too many other series like that. Fantasy seems to create them 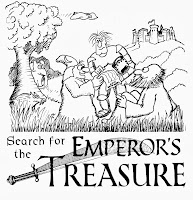 like so many maggots out of roadkill. Alright, so that's harsh, but more than a few are by writers who might be great at a shorter length but feel compelled by market to drone on for ten volumes. Instead of sharpening their storytelling skills, they spin things out like Scheherazade struggling to stave off execution. Every grain of sand needs to be catalogued, every horse shod described and all the thoughts of everybody who might be involved in the plot to steal the emperor's treasure.
I admit, it's a matter of taste. I don't really want "epic fantasy that I can get lost in for days, not hours" (as Locus wrote of William's tril(quadrol)ogy). I prefer my escapist reading to move and a with story anchored to four 800-page books it gets a little tough to build up any momentum. Put one down for more than a day or two and you're going to start asking who was that character again.  There's too much stuff getting in the way.

It'd be silly to say there's no good doorstoppers.  Personally, I like big chunks of Steven Erikson's Malazan stuff.  Based on sales of it and similarly thick books, they're what a majority of readers want (unless places like HFQ are getting some sort of monstrous level of readership they're keeping secret). The contemporary fantasy audience wants to get lost for days on end. I remember reading about someone at Black Gate, the writer Howard Andrew Jones I think, having the magazine dismissed at a con by some fans because they only read fat books not short stories. Somewhere anthologists like Lin Carter must have shed a tear.
I'm always surprised when I read negative review of books I like such as Glen Cook's Black Company series or Michael Moorcock's Eternal Champion series citing a lack of character development when compared to Game of Thrones or the Wheel of Time books. There's this misconception that mere length means better character development. I always thought it was the quality, not quantity, of the writing that did that.

I've also just thought that maybe gaming is to blame for some of the changed expectations of younger readers. In Michael Moorcock's The Vanishing Tower there's a battle between two summoned races, the female Elenoin and the male Grahluk. If memory serves there's barely a paragraph of explanation about them and then they're gone, never to be mentioned again. Now,
I believe gamers want to understand all the nuts and bolts operations behind every monster and character. As RPG gaming became less and less free-form, players and refs wanted everything to "make sense". Games require magic to be systematized so it's predictable and consistent. Just look at the Steven Erikson's RPG-derived magic. Every bit is mapped out and explained. Each component fits into a larger scheme. His wizards might as well have level numbers stamped on their heads.
I fell under this spell myself back when I still gamed. When I reffed I had to know the populations, the economies, everything, about every part of my world. When I played, I expected a similar level of detail, so I'm no stranger to this phenomenon myself. 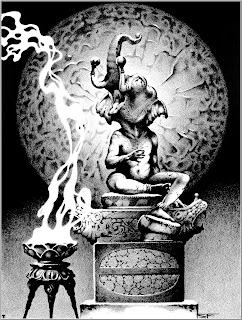 At some point this became the normal expectation from many readers and many writers were more than ready to fulfill it.  I suspect the epic-quest template from Tolkien also helped bloat books. It wasn't enough that Conan faces some lions, climbs a tower, fights a spider, and talks to an alien. Now it has to involve an epic slog across thousands of miles of landscape, a struggle to overthrow a corrupt ruler and numerous flashbacks to the hero's childhood running with wolves or something. Bigger is better.
All of this was hammered home, for the gazillionth time, when I was finishing off the short story review for Black Gate. There's so much good, even great, writing being done these days. Some of it's from brand spanking new writers with no credits to their name and some's from grizzled old hands like Joe Bonadonna (what, you haven't you heard me exclaim how much fun Dorgo the Dowser is and bought it already?).

If you like fantasy, and heroic stuff in particular, there's no, let me I repeat, absolutely no reason to limit yourself as a reader. If you're hesitant then dip your toes in with a single-character collection like Mad Shadows or Dossouye. Pretend it's an actual novel, not a fix-up. The next time you can read a themed anthology like Return of the Sword or Swords & Dark Magics. Finally, and I understand this might take some time, a magazine. Trust me, it's worth the work.
Posted by The Wasp at 4:35 PM