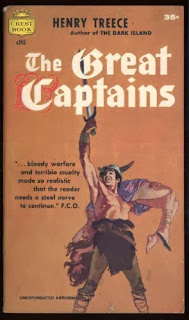 Just reviewed Henry Treece's The Great Captains over at Black Gate. My dad had Treece's The Crusades lying around, but it was only when I got Moorcock and Cawthorn's Fantasy: 100 Greatest Books that I had any sort of real understanding of who Treece was.


Great Britain has a vast literature, much of it fantastic, that examines the island's real and mythical history. Sometimes it's about the very land itself and how the actions of the waves of people migrating to or invading Britain have left imprints that still resonate today.  I'm not totally sure why it appeals to me as much as it does. I trace a quarter of my ancestry to England, so maybe there's something going on there, some part of my deepest Jungian-type race memory's being tickled. When I read Robert Holdstock's Mythago Wood I felt like I was reading the pre-history of my own English antecedents. I was brought up deeply aware of my English roots. If my Dutch background had been emphasized would these stories hold the same appeal? 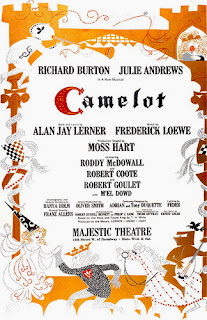 Much of the literature specifically called the Matter of Britain and deals with the mythic (or at least mythic versions of) the kings of Britain. I'm not that familiar with the older stuff like the Historia Brittonum, only the modern.

I'm a big fan of the Arthur stories. I love T. H White's The Once and Future King as well as its spin-off, Camelot. I also find that magnificent wreck, Excalibur, riveting. The whole struggle to fight against "might makes right" and stave off the impending long night appeals to our hope to see justice done. One claim about all the kingly literature is that it was written to establish a body of patriotic myths for the land. Well, you really can't do better than Arthur Pendragon. The Arthur-Guinevere-Lancelot triangle makes the story more poignant, humanizing a potentially demi-god-like character. 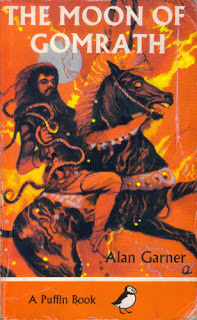 Other authors who've dug into Britain's past that I can recommend include Alan Garner and Susan Cooper. Garner, more than any other author I'm familiar with, has dug the deepest into the mythic history of Britain. Keith Robert's Pavane and The Chalk Giants are also favorites, exploring some of the same subjects, but in sci-fi settings.

Being a fairly young country with no real 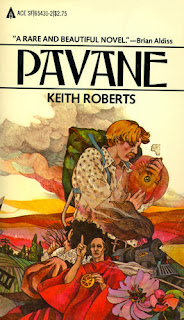 connection between the original myths of this continent, America doesn't have the same sort of body of literature. That we're also immigrants from all corners of the world only makes the a unifying myth harder to create (you could argue about the Founding Fathers holding that place, but I don't think the deist ones would appreciate it). Maybe that's why I'm so enthralled by these stories. While my roots go back to this country's founding, they really go back much further, to another land. Maybe there's something buried deep in the bedrock of my cultural/genetic past that calls to me from back down the years.

Reading The Great Captains put me in the mood to cue up some Jethro Tull albums. In particular, Thick as a Brick and Songs from the Wood got lots of play. I haven't listened to the latter that much in a long time. Does liking Jethro Tull make me hopelessly uncool?

My next Black Gate post will be a review of October's short stories from the usual suspects. After that I it's either de Camp's The Fallible Fiend or the new Deepest, Darkest Eden from Miskatonic River Press. As to music, I just put on Manowar's Battle Hymns. Overused as it is, the only word is AWESOME!