God Stalk by P. C. Hodgell and other ramblings 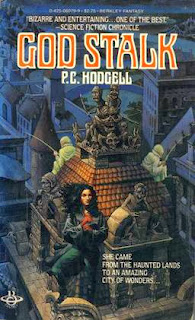 Just reread P. C. Hodgell's God Stalk for the, I dunno, seventh or eight time.  I enjoyed it so much that I think I'm going to make the effort to finish reading the rest of the series. I've read half of it leaving me one long book and two short ones to go.  If you haven't, go read the review at Black Gate, then go read the book.

Reading the book got me to thinking about what makes a book one that draws me back to it again and again over the years. The books I reread every few years include God Stalk (duh), The Master and Margarita, LotR, the Disc World Series (several at a time).  Maybe I'm exposing myself as a shallow reader with poor taste, but I don't care.  I've read them at various stages in my life, as a teenager and an adult and never been disappointed.
Do these books possess something in common that makes me love them? Well, yes, all are fantastic. Not a mundane plot in the bunch.  The imagination invested in all these books is staggering. Whether it's Tolkien's reworking the themes of Northern European myths, Pratchett and Hodgell playing with the tropes of modern fantasy fiction, or Bulgakov's meshing together ancient history with grim Soviet reality into a blackly comical tapestry, I'm astounded each time I read these books. 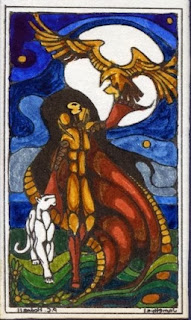 I think that's not it, though.  It's the characters that grab me an hold me. Jame's curiosity and determination to make a place for herself, Margarita's struggle to save the Master and Pilate's to do the right thing and save Yeshua and the travails of all the Ring Party.  These characters resonate with me in ways that I'm not sure I fully understand.  I love Life: A User's Manual and Dune but I don't pull them off the shelf every few years for a reread. Maybe if I was a closer critic of the texts I could figure out exactly how each author captures my attention, but I'm not sure I want to.

Right now I'm reading Larry Niven's The Magic Goes Away and the two earlier linked short stories, "Not Long Before the End" and "What Good Is a Glass Dagger?".  More interesting than really good, they're still fun enough to not make me feel like I'm wasting my time.  Also, totally cool Esteban Maroto pictures in TMGA. 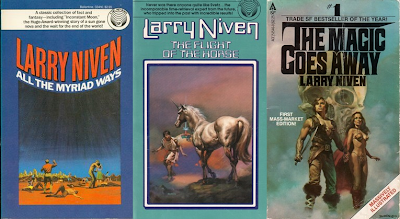 No music was consumed during the reading or writing of the God Stalk post.  Sometimes it just goes down that way.  Now, I'm digging out my Ocean Colour Scene stuff and going all British trad-revival rock.  Next comes Paul Weller probably.